Last year, 53,947 horses were shipped from the United States to Mexico for slaughter. That marks a 26% decrease from 2018 when 70,708 horses designated for slaughter were transported across the southern U.S. border, according to the U.S. Department of Agriculture’s Market News Livestock Export Summary. 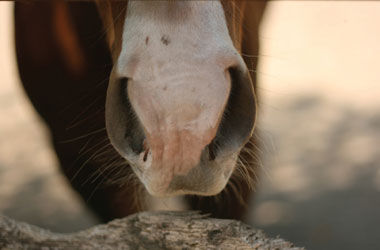 Although Congress had made several attempts to ban the slaughter of horses for human consumption, the practice didn’t end until the nation’s three horse meat processing plants closed in 2007. Two Texas facilities were closed by court order; the Illinois plant shuttered after state legislation against horse slaughter was enacted.

Efforts to open new horse slaughter plants have been unsuccessful, partly because of legislation denying funds for federal inspections of such operations.

Nevertheless, thousands of U.S. horses have been exported to slaughterhouses in Mexico and Canada.

Canada and Mexico are two of the main exporters of horse meat to Europe, according to Humane Society International. At least 85% of horses slaughtered at European Union–approved Canadian horse slaughterhouses originated in the United States, and 50% of the horse meat produced from those animals was exported to the EU.

Federal data on the number of horses transported to Canada annually aren’t available. However, the advocacy organization Animals’ Angels estimated that 12,273 U.S. horses were imported by Canada for slaughter in 2017.

Horse slaughter on the horizon?