By Interview by Greg Cima

People see the changes they expect in their pets, leading them to misattribute illness, good health, improvements, and declines. 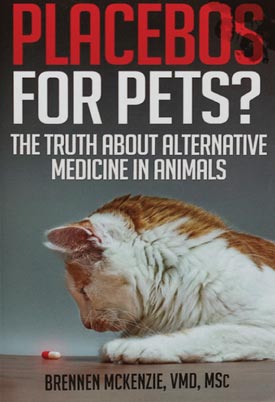 Dr. Brennen McKenzie is a companion animal veterinarian working in California, the writer behind the SkeptVet blog, and the author of the recently published book, “Placebos for Pets? The Truth About Alternative Medicine in Animals.” He also is a columnist for Veterinary Practice News and past president of the Evidence-Based Veterinary Medicine Association. He wrote a 2014 JAVMA commentary on cognitive bias in clinical decisions (J Am Vet Med Assoc 2014:244;271-276).

In his book, Dr. McKenzie teaches how to evaluate the theories, methods, evidence, and safety records for myriad complementary or alternative therapies. The following interview has been edited for length and clarity.

Q. Did you write your book with a particular reader in mind?

A. I initially was thinking of it as a resource for pet owners, and I tried to write the book in language that is accessible to the general public. So, I’m hoping that it will be an introduction to the general ideas about how we evaluate medical therapies for pets, what’s the appropriate way to do that, what’s the role of science in helping us to evaluate these things—and also an appraisal of some of the more common alternative medical approaches that pet owners are likely to encounter. However, I also wanted it to be useful to veterinary professionals. All of the things that I talk about have extensive academic references available so that they can dig deeper if they want.

Q. Would you recap why we’re all susceptible to the caregiver placebo effect?

A. It’s a fundamental feature of human cognition, and this is one thing I think all veterinarians should have some familiarity with—the history and philosophy of science and cognitive psychology. We all reason in ways that are kind of built into our brains.

I give a patient a medication, and a week later, that patient’s clinical symptoms resolve. I see a causal connection there and assume that the medication is responsible for the change. What we know from science is that it’s a lot more complicated than that. We’re often doing multiple things at once. Diseases have a natural history where their symptoms wax and wane and can just resolve spontaneously. We may have the wrong diagnosis to begin with, and so when things don’t go the way we expect, it’s not always because of what we did but because we were wrong about our assumptions.

It’s very difficult for any of us, whether we’re veterinarians or not scientifically trained, to ignore our personal experience. And if a study comes out saying something that I’ve been doing for 10 years and been selling to clients doesn’t work, it’s difficult psychologically and cognitively for me to accept that my assessment is wrong and that I’ve been doing the wrong thing.

Q. How do you challenge mistaken beliefs among your clients?

A. It’s complicated. One of the primary questions in science education today is, “How do you change people’s minds about things?” And we’re facing a crisis in terms of vaccine hesitancy (see story).

As a clinician seeing patients, I have a few key things that I try to focus on when I want to challenge somebody’s perception. The first is I have to acknowledge that I understand their perception and validate their experiences and their reasoning.

I often talk about other cases in science where we’ve given up on therapies that clearly don’t work anymore. Bloodletting is a great example where we believed in things for long periods of time and found them not to be true.

I also try to say, “OK, let’s look at this in terms of risk and benefit.” Glucosamine is a widespread therapy for which there’s very little evidence of efficacy, and yet, everyone’s using it. I say to people, “Here are the reasons why I don’t think it probably works. I also think that the risks are quite low, so I don’t feel like it’s imperative that you give up that.”

If you meet people halfway and work with their beliefs and their goals, I think they’re more likely to listen to you. Over time, you build a relationship with clients, and they come to trust you, and I think that gives you more credibility to tackle larger and more challenging beliefs.

It also makes a difference where that belief fits in their life. I’m not going to talk to a client who’s a chiropractor and try to convince them that chiropractic is not a valid therapy because that’s embedded in their entire life, and that’s not going to be a useful or successful interaction.

Q. Do you think that a typical person who uses an alternative modality understands the theories behind that practice?

A. Almost certainly not, no. I think most people don’t understand the theories behind the drugs that I give them, either. Most people are not interested in the deep background of medical therapies. What they hear are claims by practitioners of benefits, usually justified in terms of, “I’ve been doing this for 20 years, and it sure looks to me like it works.” Anecdotal claims tend to be the easiest to offer and the most psychologically compelling, even though they’re the least reliable.

There are certainly some people who have a general worldview that is skeptical of science and technology and the pharmaceutical industry, which has certainly earned a great deal of skepticism. And I think that alternative medicine fits into that worldview. I think also that conventional medicine, particularly for humans, has a lot of serious problems in terms of how we communicate with people, how we manage their lives and their needs. We’ve become very siloed and segmented into subspecialties and very technologically focused. I think there are a lot of things wrong with how we offer health care to people, and the environments and conversations that alternative practitioners often have with people address a lot of those concerns and those problems. I do think that alternative medicine fits into people’s lives in an ideological and philosophical way.

Q. How can a pet owner tell which studies are good, which results are evidence that something works?

A. I do offer some fairly simple guidelines in the book. One is that no single study is ever definitive because it’s impossible to completely eliminate bias. If there’s only one study, you should still be a bit skeptical. Larger studies are better than smaller studies. Any study that does not effectively have a placebo arm and doesn’t hide from both the owners of the pets and also the investigators or veterinarians which therapy each pet is getting is probably going to be biased and not reliable. So, there are some very simple rules that you can apply.

I think, honestly, the onus is on veterinarians to be better at understanding how to appraise a clinical trial and then to talk to owners. Even in the absence of large-scale, definitive, high-quality evidence, I do think we can look at these therapies and the reasoning behind them and the evidence for them and make sound, honest recommendations one way or another—that don’t just rely on anecdotes.

There’s a method that I try to teach in the book for approaching things, so even if there are things that I don’t cover in the book, I hope that it’ll be useful to people in terms of finding a structured, reliable way to approach new things.

As a veterinarian, I’m hearing about new supplements and new therapies all the time, and many of them don’t have a lot of research evidence. But I don’t think we have to say to our clients, “I don’t know, there’s nothing I can do, take your best guess.” I think we can use a systematic, science-based approach to help guide and counsel our patients.