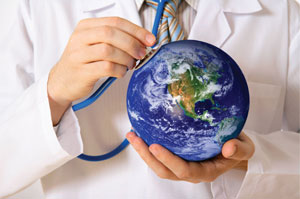 “By using the ‘One Health’ approach, global health problems including antibiotic resistance and the spread of infectious diseases can be more easily addressed,” said California Democrat Sen. Dianne Feinstein, who co-sponsored the Senate resolution with Arizona Republican Sen. Martha McSally, in a Dec. 20 release.

“Our resolution will hopefully draw attention to the need for holistic approaches to addressing human health that take into account changes in environmental and animal health,” Feinstein continued. “With diminishing resources and a growing human population, fighting problems with a ‘One Health’ approach must be encouraged now more than ever.”

“The health of our population is dependent on the interconnection of people, animals, and the environment,” McSally said. “I was glad to join Senator Feinstein in introducing this resolution designating January as National One Health Awareness Month to promote ‘One Health’ and its growing collaboration in order to make our world a healthier place.”

Dr. Deborah Thomson is the 2019-20 AVMA Fellow working in Feinstein’s office. Each day, she uses her clinical veterinary knowledge and one-health background while working on a range of federal policies, including animal welfare, public health, and environmental issues.

The text of the Senate resolution reads as follows:

Whereas One Health is a collaborative, multisectoral, and transdisciplinary approach, working at the local, regional, national, and global levels, with the goal of achieving optimal health outcomes recognizing the interconnection between people, animals, plants, and their shared environment;

Whereas the increasing threats posed by emerging diseases shared between animals and people, foodborne, vector-borne, and waterborne diseases, and other environmental factors may support the need for an integrated effort by professionals from multiple disciplines, including health, science, technology, and engineering;

Whereas, according to the Centers for Disease Control and Prevention, up to 75 percent of new or emerging infectious diseases in people are spread by animals;

Whereas, each year, International One Health Day is November 3; and

Whereas One Health is essential to combating and strengthening the surveillance of emerging and reemerging diseases: Now, therefore, be it

Resolved, That the Senate designates January 2020 as “National One Health Awareness Month” to: