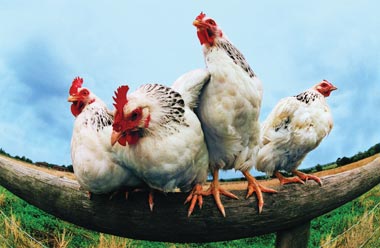 A million-dollar grant from the U.S. Department of Agriculture is helping a coalition of international researchers better understand how infectious bursal disease virus affects the transmission of disease caused by influenza A virus in chickens.

“Understanding transmission and evolution of infectious diseases is really important not just for chickens, but for any population, be it humans or animals,” said Dr. Marie Culhane, an associate professor in the Department of Veterinary Population Medicine at Minnesota’s veterinary college and co-investigator on the project, in a press release.

Dr. Culhane has spent her career studying influenza viruses in all species. She said the study “could have broader implications, such as how the immune status of an individual in the flock, herd, or group affects disease spread.”

Infectious bursal disease virus weakens the immune system in chickens. Researchers suspect IBDV may be a key player in the spread of avian influenza, prolonging the period during which birds can shed viruses into their environment and reducing vaccine efficacy.

Moreover, IBDV has been identified in wild bird species in Europe, and because wild birds are natural hosts for avian influenza, it’s quite likely that wild birds with both IBDV and avian influenza will be better at spreading the viruses to domestic poultry. The study is investigating the genetic code of IBDV and how differences in that code change the way the viruses move.

Data collected from the study will be used in transmission and surveillance simulation models to help determine the impact of IBDV exposure and spread of disease. The models will also attempt to capture the effect of IBDV exposure on the time it takes to detect avian influenza virus shedding from infected birds to other birds in the same environment.

Researchers hope their findings will raise awareness of the need to maintain good immune status in a flock to benefit animal welfare. It could also influence policy on the management of avian influenza by revealing a need for either increased surveillance for IBDV in both wild and domestic birds or screenings of the immune status of chicken flocks to help identify at-risk flocks sooner.

“A major advantage of this project is the combination of studies in both poultry and aquatic waterfowl populations,” said Dr. Carol Cardona, one of the lead investigators and chair in avian health in the veterinary college’s Department of Veterinary and Biomedical Sciences, in the press release.

“This allows for a more holistic, integrated approach,” Dr. Cardona explained, “that combines field studies and metagenomic sequencing with experimental challenge studies in order to answer fundamental questions regarding the ecology and evolution of IBDV and avian influenza virus, which are both economically important pathogens for the poultry industry.”