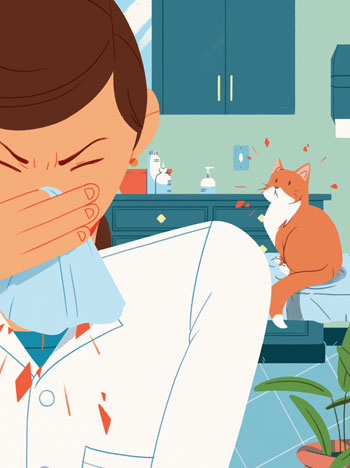 Dr. Jessica N. Graves didn’t think about her allergies when she was growing up in Canada, but she started to do so when she moved to Illinois.

“I had an asthma attack when I was working with some pigs, but I didn’t realize what was happening, and I didn’t tell anyone because I was self-conscious,” said Dr. Graves, an associate veterinarian at Critter Care and Sandwich Veterinary Services in northern Illinois.

More than 50 million people in the U.S. suffer from allergies, and nearly 24 million have asthma, according to the American College of Allergy, Asthma, and Immunology. Some veterinary professionals start their careers already allergic to animals, while others become allergic to their patients after entering the profession.

According to a 2009 study from the University of Saskatchewan Western College of Veterinary Medicine in Canada, about 38% of responding veterinarians reported developing an allergy during their career, and 41% said they altered the way they practiced in response to the allergy. The study used a questionnaire to examine exposure of veterinarians to occupational health hazards.

Animal-related allergies can include symptoms such as sneezing, runny or stuffy nose, red and itchy eyes, nasal congestion, skin reactions such as hives, coughing, and other asthma-related problems including shortness of breath. And yet, these professionals persist in treating animals—despite the chronic symptoms and extensive treatments—to pursue what they say is their life’s calling.

Dr. Graves, who graduated in 2005 from the University of Illinois College of Veterinary Medicine, said her allergies weren’t too bad while she was an undergraduate; she had a lot of colds, but she pushed through.

“It wasn’t really bad until I started working out in a rural area. The colds started to happen more and last longer. I’d get sinus infections that would result in bronchitis,” Dr. Graves said.

A colleague suggested that she see an allergist for skin testing. Dr. Graves learned that she is allergic not only to cats, dogs, and horses but also grass, ragweed, mold, and dust mites. The allergist prescribed several medications, including an inhaler, antihistamines, nasal sprays, and an allergy shot once a week. When she began to improve, she was able to pare down the number of medications. Now, Dr. Graves only needs an allergy shot every three weeks.

“I haven’t been sick for a year, which is a record for me,” she said.

In 2014, a study found that 36 out of 100 animal care workers tested positive on a skin prick test for animal allergen sensitization. The researchers from Shiraz University of Medical Sciences in Iran used 15 different mammal and bird allergens for the skin prick test.

Only 10% of the 50 control volunteers tested positive. The most common sensitization was to horses, canaries, and cattle.

Research also shows that people who have allergies or asthma are predisposed to react to animal-related allergens. The Asthma and Allergies Foundation of America estimates that three in 10 people with allergies react to cats and dogs.

Dr. Kathryn Primm owns Applebrook Animal Hospital in Ooltewah, Tennessee, and she found out after she became a practicing veterinarian that she had animal allergies.

“When I look back, I probably had them before that,” Dr. Primm said. “Every spring in vet school, we would all be so excited to go out and ride horses and do stuff outside with animals, and I would get sick. I would get bronchitis. Every spring.”

“I know that I have to wash my hair every day when I’ve been in the practice because sleeping with hair that is full of dander, rolling around on my face and my pillow, will make me wake up feeling bad,” Dr. Primm said.

Marc Meth, MD, a Los Angeles–based allergist, said the possibility of being sensitized or desensitized by exposure depends on the person.

“That’s the power of the immune system for you,” said Dr. Meth, who is also a board member of the Los Angeles Society of Allergy, Asthma & Clinical Immunology.

Research has shown that there might be a link between early exposure and allergies. Specifically, children who have early contact with pets are less likely to have animal-related allergy symptoms later in life, according to a 2002 study from the Institute for Risk Assessment at the Utrecht University in the Netherlands. Nearly 3,000 school-aged children and their parents completed a questionnaire that measured allergic symptoms.

While animal-related allergies can cause a range of issues for sufferers, several treatments exist.

“I would say first-line treatment is a steroid nasal spray and over-the-counter antihistamine,” Dr. Meth said. “I reserve allergy shots for three groups: people who don’t like taking medication, people who the medication won’t work well enough on, and people who want a more curative-type treatment for their allergy.”

Allergy immunotherapy is one of the most effective forms of allergy management, according to the ACAAI. Immunotherapy involves preparing an extract of the allergen or allergens, which is injected into the skin of the arm once a week to start and later once every two, three, or four weeks depending on the patient. The typical allergy immunotherapy duration is three to five years.

And now further preventive measures may be on the horizon. HypoPet AG, a spin-off company from the University of Zurich, released preclinical data in April 2019 in the Journal of Allergy and Clinical Immunology for its cat allergy vaccine. HypoCat targets the major cat allergen, Fel d 1, and is supposed to lower the amount of allergen expressed by a cat. The company has not said when it anticipates the vaccine being approved, but indicated that it is moving ahead with registration studies and discussions with European and U.S regulators. 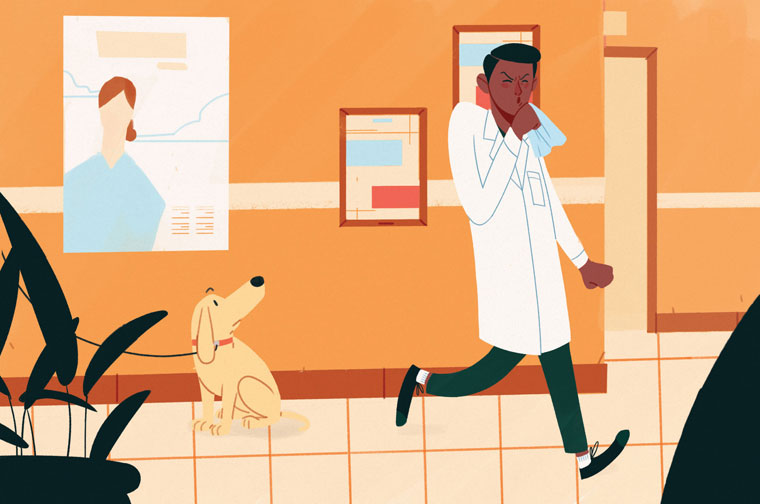 Dr. Jennifer Hayes has considered getting allergy shots but hasn’t yet. She tries to prevent allergic reactions by taking over-the-counter antihistamines, but sometimes those don’t work, or she forgets to take them. In the clinic, Dr. Hayes makes an effort to avoid animals that are triggering.

“My co-worker does exotics, and a bird was brought back into our treatment area, and within five minutes, I started sneezing and sneezing,  to the point where I couldn’t stop,” she said.

Dr. Hayes has been practicing veterinary medicine for over 10 years and has noticed that her allergies, which included cats and dust mites when she was young, have gotten progressively worse. Dr. Hayes works at Colony Animal Hospital in Newport News, Virginia, and she has two dogs and one cat at home.

Dr. Jessica Graves also has a dog and two cats at home. She has developed a few best practices that help her stay healthy, such as making sure her pets don’t go into her bedroom, cleaning frequently, using an air purifier, never opening the windows, and changing the furnace filter frequently.

Dr. Graves said the practice where she works is always being cleaned, so she has no issues there, but she makes sure to have antihistamines around.

Dr. Graves suggests that negotiating for good medical insurance should be a top priority for veterinary professionals with allergies.

Never gonna give you up

“I can’t imagine I would do anything else. I just have to find compromises. I can’t work six days a week as I used to, or I’ll be sick, and I won’t be able to work at all,” she said. “So, I’ve had to change my schedule and find other ways that I can contribute and help animals that are not in the exam room.”

One way she does this is through speaking engagements. Dr. Primm recently got her certified veterinary practice manager certificate and she’ll be speaking about practice management at the North American Veterinary Community’s Veterinary Meeting & Expo in January.

Dr. Graves said there have been times she thought she should have chosen a career in botany, but she’s allergic to most plants, too. She is optimistic about managing her allergies, though, and believes that people who want to be involved in veterinary medicine, even those who suffer from animal-related allergies, will find a way.

“It’s a vocation,” Dr. Graves said. “Most people won’t be dissuaded. I’m allergic to Illinois. If I was going to do something (for my allergies). I would have to move to Alaska or Antarctica. I’d have to live in a bubble. I can’t avoid the environment and I can’t avoid this profession. … Allergies are just another thing” to deal with.

Marc Meth, MD, a Los Angeles–based allergist, suggests veterinary professionals experiencing the following symptoms during or after handling an animal may consider seeing an allergist:

Correction: An earlier version of this article gave the wrong first name for Dr. Jessica Graves.