Not too much, not too little: Veterinarians try to find sweet spot on hours worked

Dr. Laurel C. Himes “worked like crazy” for the first five years of her career. That’s when she was trying to establish herself, interning at Animal Medical Center in New York City and then opening Beach Animal Hospital in 1995 in Point Pleasant Beach, N.J. Since then, she’s worked anywhere from 20-50 hours, depending largely on what her two daughters are doing.

“I think everyone in my generation worked 60 hours until they were 40, and then they could work 40 hours,” Dr. Himes said. “Now I’m interviewing younger vets who think the workweek is 35 hours and (want to) have four months of vacation. It’s quite a difference between the workweek they expect and what it used to be.”

But with the market for veterinarians remaining robust for a third year, work dynamics are changing, and those attitudes may be the new normal, said Charlotte Hansen, an economist in the AVMA Veterinary Economics Division, during her presentation at the 2019 AVMA Economic Summit held Oct. 23-24 in Rosemont, Illinois.

Practice owners should consider offering perks such as flexible schedules or part-time work, an array of benefits, or a path towards practice ownership, she said, as associates increasingly value these arrangements.

When broken out by graduation year, the number of men saying they wanted to work fewer hours increased from below 15% among those who have been in the workforce around 10 years or less to more than 25% among those who have been out of veterinary school 30-40 years. For women, however, the number wanting to work fewer hours stayed close to the 25% mark until decreasing to 21% for those who graduated 30-40 years ago.

The mean monthly number of searchable jobs on the AVMA Veterinary Career Center this year—around 2,700—exceeded the mean monthly number of new job seekers—less than 500—according to seasonally adjusted numbers. In fact, employers were so hungry for talent that more than half of job listings gave “any experience” as the work requirement, and 90% of listings were for full-time jobs. Nearly all listings, save for 6%, targeted veterinarians.

The gulf between the number of jobs and the number of new job seekers has only widened since 2016. The supply of labor in veterinary profession has had a lag in recovery since the Great Recession partly because of the time it takes to complete a veterinary degree.

Hansen said more than 4,500 full-time–equivalent veterinarians working 40 hours a week are needed to satisfy the work-hour preferences reported by practitioners this year. That number has decreased, however, from last year when it was 6,291 FTE veterinarians, but was still higher than the 3,330 FTEs needed to satisfy reported work-hour preferences in 2017. Whether the increasing number of veterinary seats at U.S. veterinary colleges is finally catching up to market demand has yet to be determined.

Hansen also discussed factors that, according to division data, are associated with burnout. These include negative feelings toward one’s educational preparation—or how ready one feels to practice—and dissatisfaction with current employment as well as more hours worked per week.

Expanded lunch time, open hours with the boss, and other things associated with improving well-being were some suggestions Hansen gave to help practitioners and other staff members avoid burnout.

Dr. Himes has changed her schedule about 10 times over the past 25 years, depending on what life has thrown at her. Doing so has allowed her to be at home when her younger daughter is done with the school day, attend sports and other activities, and care for sick family members. She says she enjoyed the flexibility that comes with being a practice owner, but it does come at a cost.

“In theory, that is the advantage, you can decide when to work,” Dr. Himes said. “But in reality, if something happens, then your plans could go out the window.” 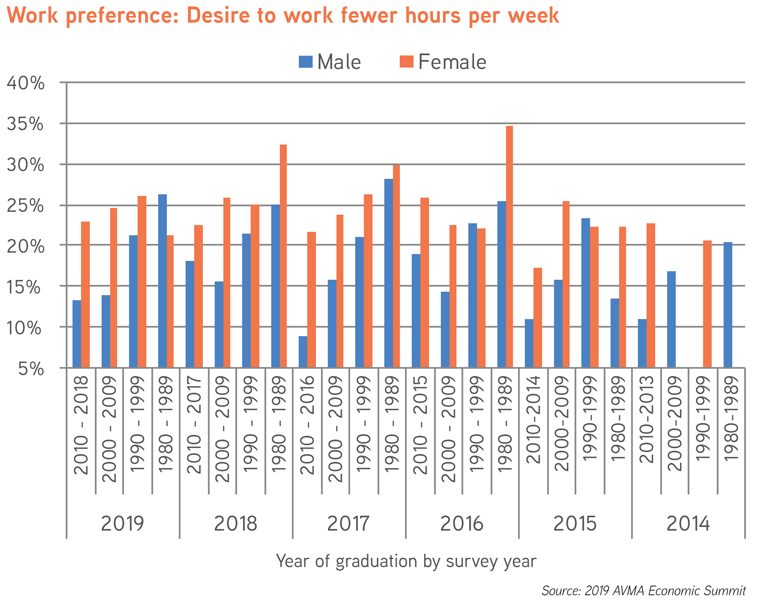 To get more data for later studies, the AVMA Veterinary Economics Division oversampled minority populations for the first time this year—accounting for about 20% of those surveyed versus 9% typically. Some preliminary data show that, when looking at mean professional income by practice type, minority veterinarians saw higher salaries than their white counterparts in the areas of mixed animal and equine practice as well as uniformed services, state and local government, and academia. They were out-earned largely in the areas of food animal–exclusive practice, consulting work, federal civil service, and companion animal–predominant practice.

The 2019 Economic State of the Veterinary Profession is available in the AVMA store, free to AVMA members and $125 for nonmembers.