Lead in cows is a risk for people 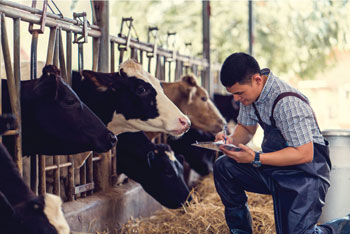 Cattle raised for milk and meat can consume lead through their environments or feed.

Some of that lead can contaminate products of those animals, especially milk and organ meats.

Dr. Karyn Bischoff is a veterinary diagnostic toxicologist for the New York State Animal Health Diagnostic Laboratory, and she teaches toxicology at the Cornell University College of Veterinary Medicine. In a session at AVMA Convention 2019 this August in Washington, D.C., she described the possible sources of lead exposure in cattle, such as old paint and broken batteries, as well as the risks to humans.

"There is a relationship between blood and milk lead," she said. "It's complicated, but, if you have dairy cows that are exposed to lead, you have a serious problem on your hands."

Officials from the Centers for Disease Control and Prevention indicate no research has identified a safe blood lead concentration. Lead poisoning's neurologic and gastrointestinal symptoms are not obvious, and it often is unidentified.

CDC officials also have indicated lead toxicosis is underreported in people because not all children are tested and not all states require reports for lead exposure. Animals can be exposed to the same environmental sources of lead—such as paint dust or water supplies—as humans, as evidenced by research from Michigan State University that showed pets in Flint, Michigan, had four times the median blood lead concentrations of control dogs after the 2016 change in the municipal water supply, without corrosion control, caused lead contamination.

On one farm Dr. Bischoff investigated, cows were exposed to lead shot that was embedded in corn stalks and fed in silage. Exposed cows passed lead into their milk until the owners culled the herd, she said.

"They were dumping milk for more than two years," she said.

On another farm, the owners power washed peeling lead paint off a 1920s-era barn, spreading fine lead-containing dust that poisoned their cattle. Cattle on another farm pawed open old batteries in a trash pile and licked the lead plates inside, and calves on one farm walked through a partially opened door into a shed rife with lead-containing grease.

Lead-containing milk would be diluted before sale, but Dr. Bischoff noted that public health authorities say any amount of lead exposure can harm children.

"It does go into a bulk tank, and then it gets moved to a dairy where it goes into a bigger bulk tank, so you are getting some dilution factor," Dr. Bischoff said. "But, on the other hand, we know that zero lead exposure is what is supposed to happen."

Muscle contamination in cattle is unlikely to be high enough to cause clinical lead poisoning in people, Dr. Bischoff said. But organs of lead-exposed animals should not be sold for human consumption, nor should the bones be sold for use in calcium supplements.

Substantial amounts of lead also can pass to a cow's fetus.

The cattle barn and the owner's home contained lead paint, and the owners were remodeling. The woman gave birth to a daughter who had a blood lead concentration but grew up without any clinical signs.

CDC officials estimate at least 4 million homes have children who are exposed to high concentrations of lead, and 500,000 children have blood lead concentrations exceeding 5 micrograms per deciliter, a concentration at which the CDC calls for public health action.