Dr. Michelle Oakley is too busy to talk about her hit reality television show. It's the weekend, and she's taking a break from her solo mixed animal practice in Haines Junction, Yukon, to compete in an ax-throwing contest. It isn't a stunt for the show—competitive ax throwing is just part of living in the Canadian wilds.

Much of Dr. Oakley's life has been documented on screen since 2014, when the pilot episode of "Dr. Oakley, Yukon Veterinarian" aired on Nat Geo Wild. The show, which just wrapped filming on its eighth season, follows Dr. Oakley as she treats domestic and wild animals in a remote, mountainous region known for its brutal winters, while raising three daughters with her husband, Shane. 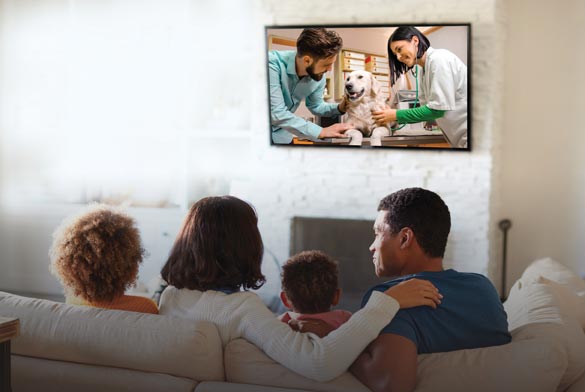 Depictions of veterinary medicine on television have changed dramatically since "All Creatures Great and Small," the scripted British drama from the late '70s to early '90s based on the life of veterinary surgeon James Herriot aka James Alfred Wight. Entertainment tastes evolved with the explosion of reality television's popularity, pets became family, and TV producers noticed. In the past two decades or so, at least 25 reality shows about veterinarians have appeared on U.S. television, primarily on the cable channels Animal Planet and National Geographic.

The genre of veterinary reality television is not without its naysayers. Most are veterinarians themselves, critical of an ineptly performed procedure or an insensitive comment about the profession. Veterinarians interviewed for this article about their experiences on reality television are hypersensitive to the opinions of their colleagues. Nevertheless, they see the shows as a powerful medium for teaching audiences about the profession they love while also showcasing their medical skills and the importance of caring for animals.

Reality TV is a broad category and older than most realize. Before "The Real World" and "Big Brother," there were "Twenty-One" and "The Price is Right."

"There's always been reality-based media. Game shows are reality based, for example," said Mimi White, a professor of radio, TV, and film at the Northwestern School of Communications. "But the term 'reality TV' starts to percolate and coalesces in the very late 1990s and early 2000s as a way of describing a set of programs that are alleged to be nonscripted."

Reality TV combines documentary-style nonfiction with the drama story arc of fiction, creating an entertainment genre that has become a mainstay of network and cable television. Cost is one reason for the abundance of reality shows—the subjects of which run the gamut, from home repair and sword forging to cake baking and life along the Jersey shore. "Dance Moms" features ordinary people rather than a cast of high-priced talent and is therefore cheaper to produce than, say, "Glee."

Viewers are drawn to reality TV because of what Dr. White describes as the interplay between the familiar and unfamiliar. "When 'Survivor' first started, it was ordinary people doing extraordinary things, and you could look on and say, 'I would never do that,' or 'I could do that,'" she explained.

Reality shows are edited according to a plot designed to provoke a visceral response from viewers. "The narrative dynamics are imbued with emotional issues and choices designed to amplify and intensify the affective dimension," Dr. White said. "Reality TV brings this kind of emotional drama to bear on almost everything it looks at."

Betsy Marino Leighton spent two years as a producer on "Emergency Vets," the hit reality series about the veterinarians of Alameda East Veterinary Hospital in Denver. She said there was nothing like "Emergency Vets" on television when the first episode aired in 1998 on Animal Planet. 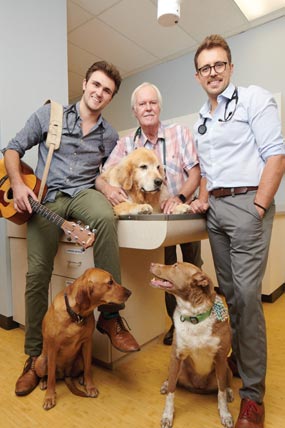 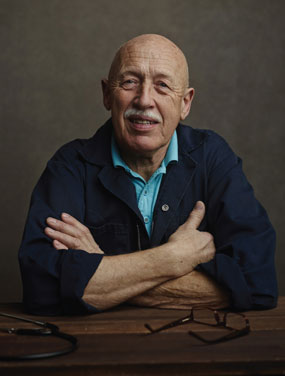 You don't have to wait long for drama at an emergency veterinary clinic. It literally walks through the door. "That was hard as a producer, to sit there waiting for someone to walk in with some sort of tragedy," Leighton acknowledged. "That's why we always wanted to make sure we were incredibly sensitive."

The effort required to produce a reality show about a veterinary clinic is herculean: "I would be in the field for a week—in the hospital from early morning till late evening—and on 24-hour call. The next week I was in the edit room, writing stories and putting together the show. Then I was back in the field.

"You worked and worked and worked, and you shot much more than you needed. You'd write it down, you'd keep track of every storyline that came into the clinic, which owners were happy to have you be a part of it, and then you pick the stories that were going to be in the show. Then you shoot follow-ups."

The pay isn't great, but I get to talk about our profession and share all the issues we're dealing with in terms of wildlife conservation and the environment.

What distinguishes veterinary reality TV within the reality genre is the cast of animal patients, Dr. White said—that and veterinarians' role as caregivers. "It seems to me that veterinary shows are more patently—and more literally—about an ethos of care," she explained. "People love animals, ordinary domestic pets and farm animals and exotics. Viewers see someone who's an expert at not just treating animals but caring for them. That's very different than 'Real Housewives' or shows like that."

Life is a classroom

Growing up, Dr. Lindsay Gallagher watched "Emergency Vets" religiously. She credits the show as one of her reasons for choosing a career in veterinary medicine. As a child, Dr. Gallagher diagnosed a corneal ulcer in the family's Jack Russell Terrier—a feat she attributes to "Emergency Vets." 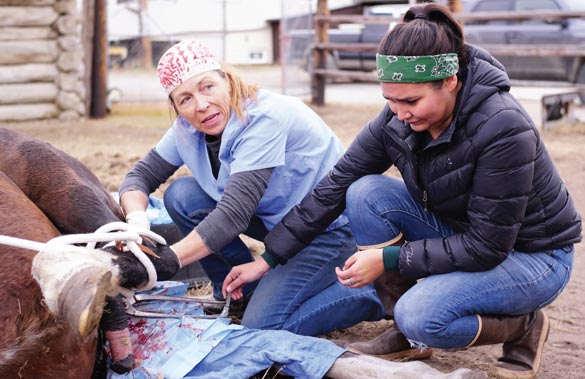 "I told my mother, 'I think Pebbles has a corneal ulcer,' and she was like, 'You're 10. What do you know about corneal ulcers?' But lo and behold, she had a corneal ulcer," she said. "If I hadn't watched 'Emergency Vets' as a kid, maybe we wouldn't have known as soon as we did. That to me is so important, that maybe I did that for somebody else."

Dr. Gallagher is referring to "Life at Vet U," the 2016 Animal Planet series she appeared on along with five other fourth-year veterinary students at the University of Pennsylvania during their final semester. Today, Dr. Gallagher is a general practitioner at Boston Veterinary Clinic and on track to specialize in veterinary behavior.

Veterinary reality TV, according to Dr. White, is a lifestyle-education-entertainment hybrid within the larger, nonscripted television context. The implication is that viewers of "Life at Vet U," for example, learn about veterinary medicine from watching a cast of affable students earn veterinary degrees and prepare for their careers.

Depending on the show, the educational content isn't limited to veterinary medicine. Dr. Ryan Henderson, who stars alongside his veterinarian father and brother on "Hanging with the Hendersons," says the Animal Planet show about the family practice is a "huge platform" to showcase the profession as well as advocate for important issues, such as conservation and the environment.

In one episode, Dr. Henderson drives his new electric car, filled with dogs and chickens, to the family cabin. He enjoyed being able to showcase the car and use it as a way to talk about reducing carbon emissions.

Dr. Oakley feels the same about her show. "There are just so many cool sides of doing a show like this," she said. "The pay isn't great, but I get to talk about our profession and share all the issues we're dealing with in terms of wildlife conservation and the environment. Where we live in the Yukon and Alaska, the climate is changing so quickly, it's scary."

Dr. Jan Pol is arguably the most recognized name in the veterinary reality TV genre. His show on Nat Geo Wild follows him, his family, and his employees at his mixed animal practice in central Michigan. The series premiered in 2011 and has consistently been a hit for the network. In 2017, the show averaged nearly 1.4 million total viewers per episode leading up to the 100th episode and season 10 finale, making it the most-watched season in network history at the time.

That was hard as a producer, to sit there waiting for someone to walk in with some sort of tragedy. That's why we always wanted to make sure we were incredibly sensitive.

Yet, controversy has dogged "The Incredible Dr. Pol" star following a complaint of substandard veterinary practice related to his treatment of a dog injured by a car in May 2011. The Michigan Department of Licensing and Regulatory Affairs later fined Dr. Pol $500 and put his license on probation. However, in 2016, the Michigan Court of Appeals reversed the board's punishment as "arbitrary and capricious." The court described the case as "curious" since Dr. Pol saved the dog's life.

Dr. Pol appears to have weathered the storm unscathed. Season 15 of "The Incredible Dr. Pol" premiered on Nat Geo Wild this past July, and he says fans from around the world regularly call his clinic to say how much they love the show. "The most remarkable was a call from a Romanian boy that was 13 years old," Dr. Pol said. "He spoke perfect English and translated questions from his mother."

As for his critics, Dr. Pol says they see only a portion of what actually happens at the clinic. "With over a hundred hours of taping to make a 40-minute show, it's clear that not everything can be shown," Dr. Pol said. "So, with not knowing all the details, critics don't know what else has occurred."

Initially, Dr. Jessica Vogelsang's opinion of veterinary reality TV was not good. The author of the Pawcurious blog and veterinary journalist thought some of the stars intentionally invited controversy to gin up ratings and ultimately reflected poorly on the profession. Dr. Vogelsang wrote as much in a July 2015 post for the website PetMD, specifically taking to task the star of "Dr. Jeff: Rocky Mountain Vet" for suggesting that he, unlike other veterinarians, isn't motivated by profit.

Fans of the show responded en masse, defending Dr. Jeff from Dr. Vogelsang's critique. Their numbers and the intensity of their devotion surprised Dr. Vogelsang, causing her to rethink the matter. "Veterinarians are getting caught up on the specifics of the treatment they're seeing, and it's just not worth having a public discourse about what is and isn't appropriate. That's why we have regulatory boards," Dr. Vogelsang said.

"If you publicly criticize what they're doing, which in the client's eyes is helping pets, it just boomerangs back at you," she added. "So, anything that shows veterinarians in a positive light is a good thing, and that's what we can take with us at the end of the day."