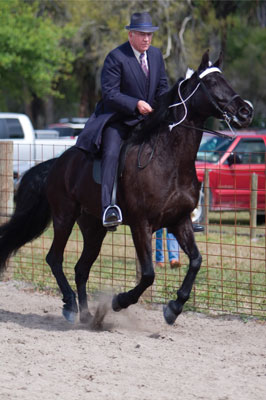 Soring, the intentional injuring of a horse to exaggerate its gait as it performs in the show ring, has been an issue for the equine community for decades. For nearly as long, regulators have tried to crack down on it, and legislators have tried to prohibit it, with limited success.

Recently, however, the U.S. House of Representatives passed the Joseph D. Tydings Memorial Prevent All Soring Tactics Act (HR 693), a bill that will strengthen the Horse Protection Act and improve enforcement by the U.S. Department of Agriculture, among other things. The legislation was introduced by two veterinarians, Rep. Kurt Schrader of Oregon and Rep. Ted Yoho of Florida, and has 307 co-sponsors.

"The bill that was passed today will strengthen and improve current regulations by improving USDA enforcement, increasing civil and criminal penalties, and banning incentives to sore horses," said Dr. Schrader, co-chair of the Veterinary Medicine Caucus, in a July 25 press release. "This is a historic day and I am grateful for my colleagues who worked tirelessly to get this legislation across the finish line and for the beautiful horses that we love so much."

Soring can take many forms, including applying a caustic chemical such as kerosene or mustard oil to the lower limbs, trimming the hooves to expose sensitive tissue, and using chains or metal bands that apply pressure to the limbs and cause pain. The Tennessee Walking Horse, Racking Horse, and Spotted Saddle Horse are the most common breeds to experience this treatment. Current enforcement of the HPA is by horse industry organizations, with limited oversight and enforcement by the USDA Animal and Plant Health Inspection Service.

"The Walking Horse industry had plenty of time to self-police and change their ways, but they decided to press on. They have failed to take advantage of this opportunity and now it is time for horse soring to end," Dr. Yoho said, according to the press release. He is also the co-chair of the Veterinary Medicine Caucus.

The AVMA has worked to educate people on this issue and has condemned the practice for over 40 years.

"The AVMA has worked with Congress for many years to stop the cruel and inhumane act of horse soring," said Dr. John de Jong, AVMA president, in an AVMA press release. "We're delighted to see lawmakers working across the aisle to advance this important legislation and provide horses with the protection from abuse they so badly need."

Both Drs. de Jong and Jeffrey T. Berk, president of the American Association of Equine Practitioners, said their associations will work with Senate lawmakers to pass that chamber's version of the bill (S 1007). It was introduced in April by Sens. Mike Crapo of Idaho and Mark Warner of Virginia. It currently has 42 co-sponsors.

The PAST Act was first introduced six years ago but was blocked on the floor. The current version of the bill was named after Sen. Joseph D. Tydings of Maryland, who authored the Horse Protection Act of 1970 and died this past fall.

The bill was endorsed by the AVMA, AAEP, American Horse Council, and United States Equestrian Foundation, among others.

Previously, USDA APHIS announced proposed changes in 2016 to strengthen regulations and enforcement of the HPA. The agency announced the final rule Jan. 13, 2017, but it never got published in the Federal Register because the Trump administration issued a memorandum for all unpublished rules to be withdrawn and sent back to the relevant agency for review. The soring ban was one of dozens of proposed rules that were caught up in the regulatory freeze.