Flying the flag for the LGBT veterinary community

Close to 400 veterinarians and friends from across the country turned out on June 30 for one of the largest gay, lesbian, bisexual, and transgender pride events in the U.S.

Pride Veterinary Medical Community, formerly the Lesbian and Gay VMA, coordinated the gathering for the 2019 New York City Pride March. The event capped off WorldPride NYC 2019, a series of LGBT events and celebrations in June, marking not only the 50th anniversary of the Stonewall riots, which launched the gay rights movement, but also the first time WorldPride was held in the United States. An estimated 4 million people attended the 12-hour march, including nearly 700 preregistered groups.

Dr. Kirk Breuninger, Pride VMC executive director, said: "With over 100 veterinary organizations publicly supporting the event, this is the first time the veterinary profession has come together at this large of a scale to demonstrate support for the LGBTQ+ community. The WorldPride march celebrates the progress made towards LGBTQ+ liberation and underscores the need for continued LGBTQ+ equality." 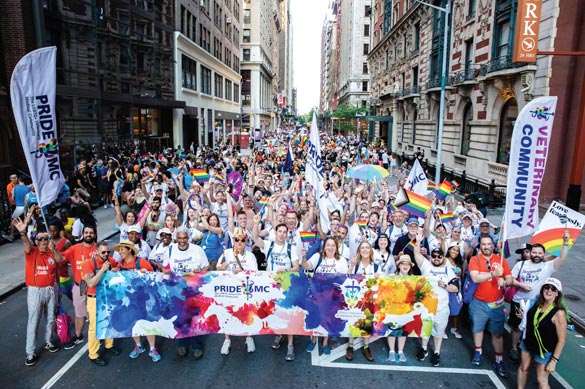