WHO, UN report says drug resistance is a crisis

Drug-resistant pathogens soon could kill 10 million people each year, according to a World Health Organization and United Nations report.

"Unless the world acts urgently, antimicrobial resistance will have disastrous impact within a generation," the report states.

Drug-resistant infections already kill about 700,000 people each year, with about 230,000 of those deaths resulting from multidrug-resistant tuberculosis, the report states. It was published in April by the Interagency Coordination Group on Antimicrobial Resistance, which is co-chaired by representatives from the U.N. and WHO.

The authors describe alarming levels of resistance in countries of all income levels, with common diseases becoming untreatable and medical procedures becoming more dangerous. Drug misuse in humans, animals, and plant production accelerates selection for resistance, as does inadequate access to clean water, poor sanitation, and insufficient hygiene, they wrote.

Where the disease burden rises, so does emergence of drug-resistant pathogens, the report states.

"The economic damage of uncontrolled antimicrobial resistance could be comparable to the shocks experienced during the 2008-2009 global financial crisis as a result of dramatically increased health care expenditures; impact on food and feed production, trade and livelihoods; and increased poverty and inequality," the report states.

More people need access to clean water and sanitation, the report states. They need vaccines to reduce the disease burden, and those who become ill need assurance the drugs they receive are effective.

Farms also should improve their disease prevention efforts and end uses of antimicrobials to promote livestock growth, especially quinolones, third- and fourth-generation cephalosporins, and other antimicrobials important for human medicine, the report states.

Since January 2017, U.S. livestock farmers have had more oversight and restrictions on uses of the antimicrobials that are in drug classes shared with human medicine. The Food and Drug Administration, in agreements with drug companies, modified approvals for the drugs deemed medically important and delivered in feed, requiring a veterinarian's approval to buy those products and banning production uses. 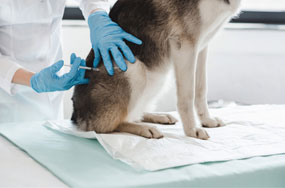 In an announcement, Jose Graziano da Silva, director-general of the Food and Agriculture Organization of the United Nations, said the report describes the need for effective antimicrobials in food production, food safety, trade, and human and animal health. 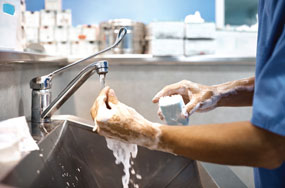 "Countries can foster sustainable food systems and farming practices that reduce the risk of antimicrobial resistance by working together to promote viable alternatives to antimicrobial use, as laid out in the report's recommendations," he said.

The report authors asked that leaders from the WHO, the FAO, other U.N. entities, the World Organisation for Animal Health (OIE), and the World Bank together set targets and fund work. The WHO, FAO, and OIE also should convene a panel that can study methods of fighting resistance and recommend actions, they wrote.

Within their report is a plea for donors and fundraisers who can invest in new antimicrobial drugs, diagnostics, vaccines, waste management tools, and research on how to use those tools.

Dr. Bernadette Dunham, who is a professorial lecturer on environmental and occupational health at George Washington University and former director of the FDA Center for Veterinary Medicine, said pathogens are growing resistant to current drugs while alternatives are slow to come through the drug approval process. Developing more vaccines would help, though the ease of doing so depends on the pathogen, development cost, and people's willingness to vaccinate.

The economic damage of uncontrolled antimicrobial resistance could be comparable to the shocks experienced during the 2008-2009 global financial crisis as a result of dramatically increased health care expenditures; impact on food and feed production, trade and livelihoods; and increased poverty and inequality.

The WHO-U.N. report "No Time to Wait: Securing the future from drug-resistant infections"

Microbes are good at developing resistance to therapies, she said. Keeping drugs effective requires judicious drug use, physician and veterinarian oversight, access to effective drugs, and measures against counterfeit medications, she said.

"I think it needs all of us working together, which is why I'm so thrilled to see the one-health approach be documented—be embraced" by the World Bank, WHO, OIE, and U.N., she said.

The public needs education on drug resistance and how it can emerge through other species, including plants, Dr. Dunham said. She cited a recent report in The New York Times that the U.S. Environmental Protection Agency gave orange and grapefruit growers permission to treat bacterial infections in their trees with antimicrobials shared with human medicine, despite objections from officials with the Centers for Disease Control and Prevention and FDA.

Dr. Dunham said individuals in health care can help people understand the risks of drug resistance, including the added risks from exposure to pathogens during sanitation problems or disasters such as floods or hurricanes. Veterinarians can take care in how they handle and administer antimicrobials, which includes having a diagnosis, using the most appropriate antimicrobial, and knowing which drugs to reserve.

After the WHO-U.N. report's publication, members of the WHO's World Health Assembly agreed in May to help leaders of member countries learn how to improve patient safety in hospitals and urge those leaders to invest in improving their water, sanitation, and hygiene services in health care. They also want sharing across member states of details on prices, patents, and results connected with health care products.

The OIE's delegates and director general also decided in May to form a permanent working group on antimicrobial resistance.