Heartworm disease remains a growing risk, worsened by warm weather and pet travel, according to predictions.

And Lyme disease is spreading as the ticks that carry the causative organism expand their range.

The Companion Animal Parasite Council's 2019 forecasts, published in April, indicate heartworm prevalence is likely to be higher than average in the southeastern and southern central states. Pets living along the Mississippi River, from northern Louisiana into Illinois, will have the greatest risk, the organization states.

Southern Louisiana and areas along the Texas-Mexico border likely will have lower-than-average heartworm prevalence, although those areas remain within the zones of highest risk, according to the forecast. The organization credits effective preventive measures for the predicted decrease in disease incidence.

As for Lyme disease, several tick species that carry Borrelia burgdoferi are spreading, especially into Appalachian regions of Kentucky, North Carolina, Ohio, Pennsylvania, Virginia, and West Virginia. Northern Minnesota also is a likely hot spot of Lyme disease, as are regions of northern and western Indiana.

But veterinarians may see lower-than-average Lyme seroprevalence along the Atlantic coast and in New England, central Wisconsin, and southeastern Minnesota, according to the forecast.

In October 2018, researchers who were funded in part by the CAPC published an article that indicates Lyme disease prevalence is rising in endemic areas of the Northeast as well as in nonendemic areas of the eastern U.S. and Midwest. That article, published in Environmetrics, involved analysis of blood samples collected from 16 million dogs in 2012-16.

In April, the CAPC also forecast high prevalences of ehrlichiosis in dogs living in the south central U.S., especially Arkansas, Missouri, and Oklahoma. And the organization expects little change in anaplasmosis prevalence in comparison with the prior seven years, although veterinarians in New York, Pennsylvania, and western Massachusetts could see more pets exposed to ticks carrying the pathogen.

The predictions and information about the methodology are available at the Companion Animal Parasite Council website. 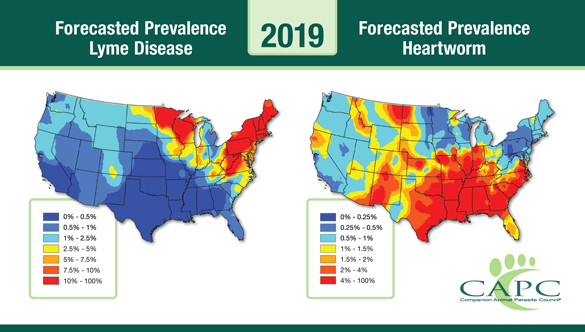