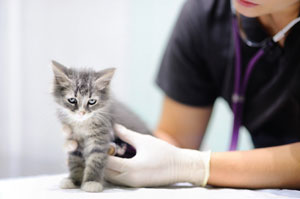 The conventional wisdom is that cats should be spayed or neutered at 6 months of age. The Fix by Five campaign challenges that assumption, aiming to reduce cat overpopulation by reducing the standard age of spay and neuter to 5 months or earlier for cats.

Fix by Five is a program of Marian's Dream, a nonprofit that aims to end dog and cat overpopulation. The program convened a task force of veterinarians and other experts in 2016. According to the recommendations from the task force, "Given the known benefits of sterilization and the lack of evidence for harm related to age at which the procedure is performed, the Veterinary Task Force on Feline Sterilization calls for veterinary practitioners and professional associations to recommend sterilization of cats by five months of age."

A surplus of cats

Esther Mechler, director of Marian's Dream, said the organization is named for her sister, a cat lover who died about 40 years ago at the age of 25. During the last decade, the organization has focused on reducing the surplus of cats and dogs.

A 2009 study by Ipsos Marketing found that three out of four people did not know when to spay or neuter their cats or dogs or thought the age was 6 months or older. For cats, Mechler said, the earliest age that has been widely accepted is 8 weeks or older.

"There's a range for cats between 2 months and 5 months that is optimal," Mechler said. "It's a perfect time for veterinarians to do that. Just build it into your kitten shot series."

Neutering male cats early also will prevent them from spraying urine to mark their territory.

Mechler said questions have been raised recently about the appropriate age to spay or neuter dogs because of health concerns, but not cats. Back in 1994, the AVMA adopted a policy supporting pediatric spay and neuter of dogs and cats to reduce the number of unwanted animals. The current policy also highlights the importance of veterinarians using their professional judgment regarding the timing of surgery. Shelters have long spayed and neutered cats at an early age, but many private practitioners default to 6 months.

Dr. Phil Bushby serves as a veterinary spokesperson for the Fix by Five campaign. He is chair of humane ethics and animal welfare at Mississippi State University College of Veterinary Medicine. He became aware of and concerned about pet overpopulation in the early 1970s.

That's when he was an intern and surgical resident with the American Society for the Prevention of Cruelty to Animals at the ASPCA Animal Hospital in New York City, when the ASPCA served as animal control for all of New York City. He was shocked by the number of dogs and cats that had to be euthanized just in that one facility, and the experience has always haunted him.

In the early 1990s, after joining the veterinary faculty at Mississippi State, he started taking veterinary students to the local animal shelter to do spay and neuter. Now the veterinary college has a comprehensive shelter and spay-neuter program.

"Given the fact that cats can become sexually mature between 4 and 5 months of age, it doesn't make a lot of sense to wait until 6 months or older to spay and neuter them," Dr. Bushby said.

Dr. Bushby said most small animal practitioners have a basic wellness plan for kittens with vaccines at two- or three-week intervals and parasite control from about 6-8 weeks to about 4 months. He suggested adding one more appointment two or three weeks later for spay or neuter.

"There has absolutely been progress over the years in reducing the numbers of animals euthanized in shelters," Dr. Bushby said. He attributed to the progress to many factors. He said, "Pet overpopulation in cats, I think, is at this point a more serious issue than pet overpopulation in dogs, and that's another reason to say let's spay and neuter every cat about 4 or 5 months of age."

Get information about the Fix by Five campaign. Veterinarians can click on "For Vets" to find veterinary resources and to sign up as a participating veterinarian.