As racing ends, thousands of Greyhounds to need homes

By Story and photos by Greg Cima

Dr. Donald Beck leans on a railing as he watches eight Greyhounds round a curve at 40 mph.

The sun is setting during the first of 15 races on a clear March evening at Derby Lane in St. Petersburg, Florida. The dogs kick fountains of sand as they chase a cloth rabbit 550 yards around the track.

As the track veterinarian, Dr. Beck watches for falls and signs of injury or strain. He checks the dogs at weigh-in to make sure they are fit to run, administers vaccines, and gives female racers testosterone treatments to keep them out of heat.

After more than 30 years at the track, he is preparing for the end of Greyhound racing statewide. Florida voters decided in November 2018 to amend the state constitution and ban dog racing after December 2020. At the time of the vote, Florida was home to most of the country's Greyhound tracks.

Groups that led the campaign against Greyhound racing accused the racing industry of subjecting dogs to cruel conditions and injuries, charges owners of the dogs deny as false or exaggerated.

Since the ban was passed, people in racing seem depressed, as though waiting for the end to come, Dr. Beck said. Some are losing the only jobs they know.

Thousands of dogs will need homes, and track veterinarians will need new jobs.

Derby Lane's president, Richard B. Winning, said he plans to run races until New Year's Eve in 2020, as long as kennels can bring in sufficient numbers of dogs. But he ended Friday matinees in January 2019 because kennels are already short of dogs.

Dr. Beck said breeding is down and racing kennels are having trouble finding replacements. He sees the possible loss of racing-bred Greyhounds, which are leaner than their show dog relatives.

"If you don't breed for these characteristics, it's not going to happen," he said.

Since the amendment passed, Derby Lane's website has added a notice that the on-track adoption group needs money to place retired racers, likely until at least 2023.

Cal Holland is the third generation of a five-generation Greyhound racing legacy. His grandfather started racing at Derby Lane in 1925, and his grandson races dogs today.

During a matinee, he stands in the shade on Derby Lane's concrete lower deck to watch the races. His dogs would run seven races that afternoon and win three.

In March, Holland was already short of dogs, down to 50 from his usual 68. The 74-year-old plans to wind down his kennel and retire.

Like most kennel owners, Holland races dogs that belong to clients. One is a friend who bred Greyhounds in Colorado for more than 30 years but stopped to avoid becoming stuck with expensive pets.

By the time a dog first reaches a Florida track, its owners have spent about $3,000 on it, Holland said.

Even before the Florida amendment passed, breeders were registering fewer puppies each year. From 1988-2018, the number of Greyhounds bred for racing each year dropped from 38,000 to fewer than 7,000, according to Jim Gartland, executive director of the National Greyhound Association.

As athletes, racing Greyhounds need specialized diets to stay within 1.5 pounds of their set weight to remain eligible to race. They need veterinary care and vaccinations. And, as the cost of caring for these dogs rises, only half the dogs that race on any given day will bring in money, he said.

Race purses are based, in part, on the amount of money bet.

Betting on Florida's Greyhounds topped $1 billion in two fiscal years—1987-88 and 1988-89—according to figures from the Florida Department of Business & Professional Regulation. That would be about $2 billion today, after adjusting for inflation.

Winning attributes the decline in interest to competition from casinos and lotteries, as well as lower interest among younger generations in handicapping and gambling on Greyhound and horse racing.

A 2015 report by Grey2K USA Worldwide, which advocates against Greyhound racing, and the American Society for the Prevention of Cruelty to Animals describes media coverage since the 1970s reporting on allegations of cruelty in dog racing, use of live rabbits for races and training, and the destruction of unwanted dogs.

Derby Lane has an on-site adoption kennel run by Greyhound Pets of America.

Vera Rasnake, spokeswoman for GPA, said dog and kennel owners have known for years that racing was in decline, and she thinks they and GPA are prepared to help former racers find homes. Her organization has been placing Greyhounds in foster and permanent homes since the 1980s, when the organization's leaders approached tracks, trainers, and farmers to adopt unwanted animals.

Rasnake said that retired racers need different treatment than other dogs. They can't be off leash, for example.

Dr. Beck, who also works three days a week for the nonprofit Animal Coalition of Tampa, said he has seen privately owned Greyhounds with unusual injuries, such as impalements from sticks and pads worn raw.

Rasnake said their personalities are unique, too, and that former racers are relaxed and trusting like no other dogs she has seen.

Winning, who owns two Greyhounds, described them as "45-mph couch potatoes" that love running and sitting. He has no plans to take another home by the time the track closes, but he concedes the temptation may be too great.

Holland has taken home one dog: Kentucky Hotspot, a sweetheart of a dog who broke her leg during a race. On May 2, 2018, she was in first place when she fell and tumbled in the dirt.

Holland also is president of the 15-kennel Tampa Bay Greyhound Association, and he said adoption groups from across the country will take in Florida's Greyhounds once racing ends.

When those that remain need homes, Holland said, none of his dogs will go to rescue groups. He rejects any implication his dogs need to be rescued.

A fight over care

"We are on the blacklist," she said. "In fact, we were the first group on the list."

Campaigning for Florida's constitutional amendment, Faircloth argued that Greyhounds typically spend 20-plus hours daily in crates with little bedding and short breaks for water, hundreds have died at Florida tracks since the state began requiring reporting in 2013, injuries often go unreported to state authorities, and dogs have tested positive for prohibited substances including cocaine. In annual reports from the past 20 years, state authorities indicated that tests for banned substances yielded about 1,100 positive results for 780,000 race-day urine samples. A fifth of those positive results involved cocaine metabolites. 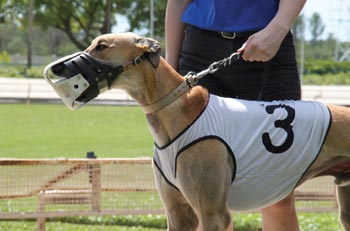 Florida does not track Greyhound injuries, although at least one county—Seminole—does. The 2015 report by Grey2K and the ASPCA indicates other states that do track injuries recorded about 12,000 from 2008-14, a quarter involving broken legs. About 760 dogs died or were euthanized after on-track injuries during that period.

Florida began requiring reports on racing-related deaths in 2013 and, as of May 2019, counted 531, according to the DBPR.

At the time of the Grey2K-ASPCA report, 39 states prohibited Greyhound racing.

Faircloth said her organization is ready to help find dogs new homes, if their owners ask. Florida was the engine of Greyhound racing, and she predicts its end in Florida will lead to its end in other states.

"Greyhound racing is a relic of the past, and we're very happy that people want that to end," Faircloth said.

Dr. Beck disputes the accounts of mistreatment, describing walks throughout each day, crates similar to those used in veterinary clinics, and trainers who spend long hours with the dogs and provide care for any injuries. He also cites financial motives for trainers to provide good care for their dogs.

"It's really hard to be cruel to your dog and get them to run around a circle in 30 seconds and keep doing it—and bring them back every three or four days and have them run," he said.

Rasnake said supporters of the racing ban gave an exaggerated image of the injuries that occur in racing, and she suggested that few people know the care that goes into racing dogs. Winning suspects contamination from the environment or food caused many of the positive results reported for tests for banned substances, and he doubts trainers would risk their livelihoods to give dogs an edge.

Florida has six racetracks, down from 11 last year, but it still runs half the tracks in the U.S., according to the National Greyhound Association. The rest are in Alabama, Arkansas, Iowa, Texas, and West Virginia.

Derby Lane will keep taking bets on races broadcast from other tracks and running a poker room while deciding what to do with the 130-acre property, Winning said. It could become houses, apartments, or corporate headquarters. He has read speculation that the property would be a good site for a stadium.

"Where the kennels go, I don't know," he said. "Some may pick up and move to other states, if they can, and some may just go retire."