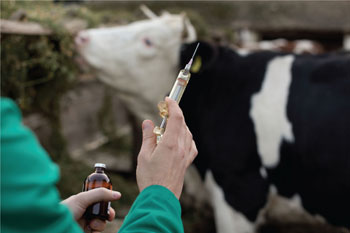 A limited vaccine supply could hurt the U.S. response to a foot-and-mouth disease outbreak, according to a federal report.

In March, the Government Accountability Office indicated the U.S. supply of FMD vaccine would be enough for only a minority of pigs and cattle in livestock-dense regions. Outbreaks in other countries have shown that depopulation alone was not enough to stop the FMD virus from spreading.

In response to a Senate request, the GAO examined the Department of Agriculture's plans to respond to an FMD outbreak, the likely challenges the department would face, and how the department would mitigate those challenges. FMD is a highly contagious viral disease of animals including cattle, pigs, sheep, goats, bison, and deer.

Among the findings, the report authors wrote that USDA policy calls for maintaining 25 million vaccine doses against each of 10 subtypes of FMD. The USDA Animal and Plant Health Inspection Service has access to FMD vaccine through the North American Foot-and-Mouth Disease Vaccine Bank, which the agency administers along with its counterparts in Mexico and Canada.

"However, the United States currently has access to only 1.75 million doses of each subtype available in the vaccine bank," the GAO report states, citing USDA documents.

The report authors acknowledge that lawmakers recently told the USDA to bolster its FMD vaccine supply and defenses against animal disease in general.

The Agriculture Improvement Act of 2018, signed into law in December, directs the USDA to establish a "national animal vaccine and veterinary countermeasures bank" and make stocking adequate foot-and-mouth disease vaccine a priority. The law also mandates creation of a National Animal Preparedness and Response Program for analysis, outreach, inspection, surveillance, training, data sharing, and research into disease treatment and prevention.

For now, the USDA may have trouble quickly obtaining, distributing, and administering vaccine, according to the GAO report, which also predicts problems associated with vaccine production.

"Supplies of FMD vaccine concentrate in the vaccine bank may be sufficient to help control and eradicate a small, localized outbreak, but it is unlikely that they would be sufficient to stop a larger outbreak," the report states, citing USDA documents and interviews with department officials.

The report also notes results of a 2016 USDA–Iowa State University survey of 32 state animal health officials, which said states plan to request a mean of 4.2 million vaccine doses each in the first 14 weeks of an outbreak.

In 2010, authorities in Japan and South Korea tried to stamp out FMD outbreaks through depopulation, killing 3 million swine and 150,000 cattle in South Korea and 300,000 cattle in Japan, according to the report. The FMD virus continued to spread until vaccination efforts were undertaken.

The GAO report included a response from Greg Ibach, USDA undersecretary for marketing and regulatory programs, who wrote that the USDA agrees with a GAO recommendation to focus work on addressing shortcomings in FMD preparation. The agency planned to start work soon to improve planning for foreign animal diseases as well as track progress on FMD preparation.