The AVMA published its first-ever Guidelines for the Depopulation of Animals in April to help veterinarians support animal welfare during drastic situations when large numbers of animals must be killed quickly.

The guidelines aim to ensure that as much consideration is given to animal welfare as is practicable within the constraints of a natural disaster, disease outbreak, or other emergency. The AVMA document encourages advance emergency planning to facilitate the best possible welfare for animals during crises. 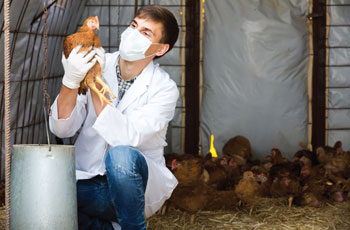 "Humanely ending the lives of animals is one of the most difficult, but necessary, tasks for veterinarians to oversee," said Dr. Steven Leary, chair of the AVMA Panel on Depopulation, in an AVMA press release. The panel developed the guidelines through a cooperative agreement with the Department of Agriculture. "During times of crisis or major catastrophe, depopulation of affected animals may sometimes be the most ethical and compassionate action."

The AVMA Guidelines for the Depopulation of Animals are the work of more than 70 volunteers, including experts in veterinary medicine, animal ethics, and animal science. They reflect the AVMA's concern for the ethical treatment of animals at all stages of life and in all situations.

The effort to develop guidance for depopulation began in 2011, when the AVMA Panel on Euthanasia saw the importance of evaluating the methods and agents that veterinarians may encounter when animals are killed under conditions in which meeting the panel's definition of euthanasia may not be possible.

The guidelines account for a broad range of animal species, including pet dogs and cats, marine mammals, aquatic invertebrates, free-range reptiles and amphibians, and captive wildlife.

The guidelines state: "When significant effort to save animals' lives has been exhausted, it is imperative that animals are destroyed and their carcasses be disposed consonant with high ethical standards. However, exigent circumstances may frustrate adherence to the Animal Welfare Principles or humane methods outlined in the AVMA Guidelines for the Euthanasia of Animals. For example, where the goal is to save as many animals as possible and protect significant public interests by rapidly curtailing the spread of disease, pain and suffering may be unavoidable.

The depopulation methods outlined in these guidelines offer regulatory officials a number of options as they make the difficult decisions to control a disease outbreak or handle a natural disaster affecting animals. These decisions are never easy and often gut-wrenching and emotionally draining for everyone.

"The circumstances surrounding depopulation are unusual and will involve extraordinary intervention measures. Given this context, the Animal Welfare Principles and humane handling and depopulation techniques should be employed as is practicable on the basis of the scientific evidence currently available in conjunction with judicious emergency planning, management, and response procedures.

"The (Panel on Depopulation) is committed to ensuring that no unnecessary pain or distress is inflicted on conscious animals during an emergency situation like depopulation."

As JAVMA News was going to press in mid-April, an outbreak of Newcastle disease in Southern California had so far resulted in the euthanasia of more than 1 million chickens at commercial and industry operations as well as more than 100,000 backyard chickens. Arizona also had a confined case in a small flock of pet chickens.

A regulatory veterinarian for much of his career, Dr. Donald Hoenig has participated in several large-scale catastrophic disease outbreaks involving livestock and poultry. The serious and highly contagious nature of these diseases often requires the implementation of extreme control measures, Dr. Hoenig said, and approved euthanasia methods are not always possible or practical in emergency situations.

"The depopulation methods outlined in these guidelines offer regulatory officials a number of options as they make the difficult decisions to control a disease outbreak or handle a natural disaster affecting animals. These decisions are never easy and often gut-wrenching and emotionally draining for everyone," explained Dr. Hoenig, head of the depopulation panel's Poultry Working Group. "The depopulation guidelines are a welcome new resource."