Viral outbreaks have battered U.S. swine farms over the past 30 years, sometimes killing millions of pigs in a single year.

As another virus deadly to swine spreads in Asia and Europe, swine veterinarians across North America are trying to find any remaining flaws in their biosecurity procedures. African swine fever kills about 90 percent of infected pigs, and China has reported more than 100 outbreaks since August 2018.

Mongolia reported its first outbreaks in January 2019, followed by Vietnam in February, according to the World Organisation for Animal Health (OIE).

In the U.S., veterinarians are quarantining feed ingredients, leading classes on how to respond during a potential outbreak, and testing the cleaners and disinfectants that may help halt an outbreak, according to attendees and speakers at the American Association of Swine Veterinarians' annual meeting in March (see story). The U.S., Canadian, and Mexican governments have increased scrutiny of passengers and cargo at ports. Swine farms across North America are further limiting what workers bring in their lunches and making them change clothes more often, meeting attendees said in interviews.

Dr. Scott Dee, research director for Pipestone Applied Research in Pipestone, Minnesota, was among the lecturers at the AASV meeting. He had traveled in February to China, where a swine producer showed him sampling results that found ASF virus in dust collected from feed dried on the ground, trucks, trailers, feed mills, feed bins, and people's hair and shoes.

Pigs infected with ASF virus can die without warning, or they can have high fever, vomiting, diarrhea, skin lesions, red blotches, and breathing difficulties, according to the U.S. Department of Agriculture's Animal and Plant Health Inspection Service. It spreads through bodily fluids, ticks, and uncooked meat scraps, and results of at least one study suggest it remains viable in feed ingredients shipped overseas.

APHIS and Customs and Border Protection officials have increased scrutiny of travelers, educated farmers and veterinarians, added Beagle teams to seaports and airports to find smuggled pork, and restricted imports of raw pork from countries and regions with infections. In mid-March, APHIS officials announced that USDA-trained dogs had helped port authorities in New Jersey seize about 1 million pounds of pork smuggled from China.

Bill Even, CEO of the National Pork Board, said at the AASV meeting that his organization ran a survey in fall 2018 and found that about half the public will want pork removed from grocery stores and menus if ASF reaches the U.S. He also noted that countries would shut down imports of U.S. pork in response to an outbreak.

U.S. companies exported almost 6 billion pounds of pork in 2018, or 23 percent of national production, according to the USDA Foreign Agricultural Service. The U.S. imported just more than 1 billion pounds.

Dr. Paul Sundberg, executive director of the Swine Health Information Center, described to AASV attendees some research findings, pending publication, that indicate ASF virus is almost certain to make it through a U.S. airport in contaminated goods over the next nine years—although that figure does not indicate the risk the virus will spread all the way to pig farms. He added in an interview that the analysis considered that authorities in Australia, Japan, South Korea, and Taiwan confiscated products contaminated with the ASF virus at airports.

APHIS officials caution that travelers from countries with ASF should wait at least five days between arrival in the U.S. and visits to sites with any pigs. Those who visit farms in affected countries should clean and disinfect clothes and shoes worn on farms, if not throw them away, before returning.

In an interview after the meeting, Dr. Sundberg said pork producers constantly weigh the costs and benefits of adding more security to their herds.

"The better your biosecurity, the more productive your pigs," he said.

Virologist Dr. Klaus Depner has some advice for swine veterinarians: Don't be afraid. ASF is a manageable disease. In Europe, the OIE reported that as of April, ASF affected domestic pigs in Bulgaria, Italy, Latvia, Lithuania, Moldova, Poland, Romania, and Ukraine as well as wild boars in at least nine countries.

Dr. Depner, of Germany's Federal Research Institute for Animal Health, the Friedrich-Loeffler-Institut, has worked on surveillance, control, and epidemiological analysis of ASF in Eastern Europe. He said the virus spreads slowly enough that veterinarians can cull pigs, clean, and disinfect in time to prevent secondary outbreaks.

Passive surveillance is important for finding infections. In the absence of any drugs or vaccines to fight ASF, biosecurity is the most effective weapon against the virus, he said.

African swine fever virus is stable, able to survive for weeks in a carcass or years in a freezer, Dr. Depner said. It also spreads slowly in comparison with foot-and-mouth disease virus, but it is far more deadly.

"You will not find the disease in healthy animals," he said.

Acute infection tends to kill pigs in six to 13 days, according to the OIE.

The pigs that survive infection will not shed the virus but may be carriers, Dr. Depner said.

Since the virus' 2014 emergence in Lithuanian wild boars, its spread in Eastern Europe has been connected to the ways people move animals and meat. In Georgia, he said, farmers received no compensation for infected pigs, so they slaughtered the animals and sold cheap pork that spread the virus.

"The human is the one who is driving and perpetuating this disease," Dr. Depner said.

In meeting proceedings, Dr. Depner and co-authors indicate the ASF virus has the tenacity and high death rate to ensure it will persist in environments while the slow spread ensures it will still have hosts.

"The interaction of these three parameters maximize both local persistence and geographical spread of the virus making its eradication a challenge," the proceedings state.

Dr. Dee said veterinarians and farmers need to think more about whether the feed and feed additives they import are needed and, for those that are, whether they could come from countries without ASF. They also may be able to reduce risk by quarantining ingredients that could harbor the virus. 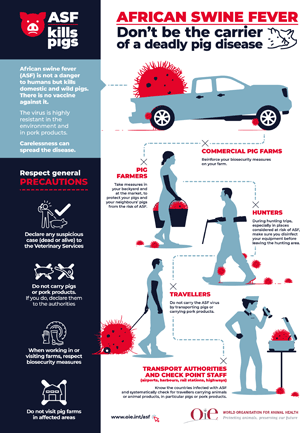 He said in an interview that his research team at Pipestone is testing whether feed additives can inactivate viruses, with promising early results against Senecavirus, PED virus, and PRRS virus. He hopes to test 10-12 additives this year and publish side-by-side results.

Dr. Dee also was an author of a March 2018 article in PLOS One that indicates ASF can survive in feed and food ingredients during simulated conditions of international shipment.

Dr. Megan Niederwerder, assistant professor of virology at Kansas State University College of Veterinary Medicine, said during the AASV meeting the 2013 emergence of PED in the U.S. showed the risk of imported animal feed as a disease vector. PED has killed millions of neonatal pigs and continues to cause disease in swine herds.

She is the lead author of an article this year in Emerging Infectious Diseases on the infectious dose of ASF virus in liquid or feed and the cumulative risk of multiple exposures. The article indicates ASF virus spreads especially well through liquid, although contaminated feed may be a higher risk because of the ways it is produced, shipped, and consumed.

Dr. Niederwerder also suggested producers and veterinarians identify the ingredients with the highest risk and import them from countries without foreign animal diseases. She also noted that ASF virus is susceptible to high temperatures.

At the AASV meeting, speakers called for federal surveillance plans and local preparations, including plans in case resources become scarce during, say, depopulation and carcass disposal.

Attendees said they have been working to teach their clients how to stay safe and know what to do in a crisis.

Dr. Dyneah Classen is a veterinarian and partner at Carthage Veterinary System in Carthage, Illinois, where she focuses on sow health. Carthage has worked with a local feed mill to isolate and store some feed ingredients for longer periods and at higher temperatures, with a goal of quarantining them at least 60 days, she said. That requires using climate-controlled storage trailers because the mill can't have heaters that could ignite dust.

The items in storage, she said, include mineral mixes that contain up to 12 ingredients from international sources. Carthage also has tried to buy ingredients from more U.S. sources, when possible.

Dr. Keith Erlandson, a veterinarian who has lived and worked in China since 2015

Dr. Tim Loula, co-owner of Swine Vet Center in St. Peter, Minnesota, said he gives clients an ASF-related "fire drill" presentation on how to stop movement of pigs and enter a 72-hour emergency standstill. About 90 percent of his clients' employees have seen the presentation, he said.

One of the presenters at the AASV meeting, Dr. Keith Erlandson, a veterinarian who has lived and worked in China since 2015, said ASF is a constant worry there and a cause of big losses. His company, CP Group, has had outbreaks on its farms.

One month after China's first reported ASF virus infections, the disease was in six provinces, he said. After two months, it was in nine provinces.

Dr. Erlandson said farm managers are trying to perfect their procedures, changing rules so often that workers throw up their hands in frustration. Whether workers follow procedures well is more important than whether the procedures are perfect, he said.

Dr. Erlandson encouraged veterinarians to be vigilant and perform necropsies when they see clinical signs of ASF. Otherwise, they risk losing weeks of virus spread.

CP Group depopulated infected farms, as depopulating a pen was not enough, he said.

Bill Even, of the National Pork Board, said the National Pork Checkoff Program is working with meatpackers to prepare in case ASF spreads to the U.S., and that includes public messaging. He also urged that veterinarians work with clients to ensure they are ready, which includes details as simple as ensuring their federal premise identification is updated.

"There's just a lot of dirty, hard work—boring work—that needs to be done behind the scenes to tighten up our ship," he said.