'We do one thing, and one thing only'

By Story and inside photos by R. Scott Nolen

Word is spreading about the American Society for the Prevention of Cruelty to Animals' program where veterinarians learn to spay cats and dogs twice as fast as before, often in under 10 minutes. A program that helps fourth-year veterinary students feel confident they are practice-ready after graduation. A program that is many things to many people but is ultimately about solving the problem of animal overpopulation through a singular focus on high-quality, high-volume spay-neuter.

The ASPCA Spay/Neuter Alliance, located in Asheville, North Carolina, consists of three buildings housing a dozen surgical suites, kennels, cages, classrooms, and a dormitory. Each of the six training programs the alliance offers covers best practices for working in a mid- to high-volume spay-neuter environment. Topics range from low-stress handling and infectious-disease control to surgical techniques and operating a high-quality, high-volume spay-neuter clinic modeled after the alliance. 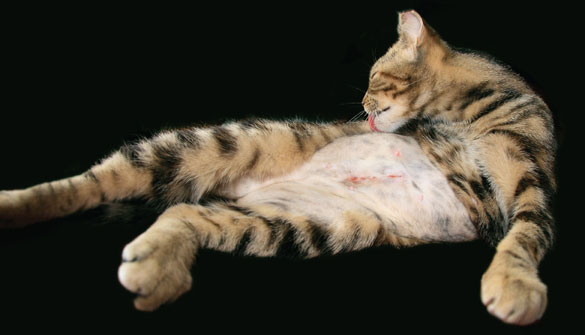 Roughly a thousand people have participated annually in training programs at the Asheville campus or off-site.

On average, 100 dogs, cats, puppies, and kittens are sterilized at the alliance campus each day. The animals come from shelters throughout western North Carolina or from pet owners making use of the alliance's low-cost spay-neuter clinic. More than 25,000 animals were sterilized by the alliance in 2018.

"We do one thing, and one thing only," said Dr. Chip Saxton, medical director of the alliance's student externship program. "When you do one thing over and over again, you're going to become pretty good at it."

When Bill McKelvy was shelter director during the 1980s for Buncombe County, North Carolina, staff euthanized more than a dozen cats and dogs daily to make room for the next day's group of homeless animals. "After having to kill 15 animals a day that were perfectly healthy, adoptable animals, I said this is ridiculous. There's got to be a better way," McKelvy recalled.

Dr. Karla Brestle has been with the Humane Alliance for two decades. She currently serves as senior director for strategic medical operations. McKelvy told Dr. Brestle when she joined the alliance something that has stayed with her. "He said to me, 'If we could spay and neuter as many animals in a year as were euthanized at the shelters, then we would start seeing euthanasia numbers decrease,'" she said.

You want the surgery to be as efficient as possible so you're not wasting any time. You want it to be quick because that's less time the animal's under anesthesia. And the quicker you work, the more animals you can perform surgery on.

Humane Alliance's impact on the unwanted animal population in the region is evident. In 2000, Buncombe County shelters took in around 16,000 animals and euthanized about 15,000. By 2014, those numbers had dropped to 6,300 cats and dogs taken in and just over 1,100 euthanized. When the ASPCA acquired the Humane Alliance the following year, the organization was already regarded within the animal shelter and welfare organizations as a model for high-quality, high-volume spay-neuter programs.

Quantifying the size of the nation's homeless animal population is practically impossible because of a lack of reliable data from government agencies and humane organizations. The ASPCA estimates approximately 6.5 million animals enter U.S. animal shelters nationwide annually, representing roughly 3.3 million dogs and 3.2 million cats. The ASPCA further estimates 670,000 dogs and 860,000 cats are euthanized by U.S. shelters each year, for a total of 1.5 million animals.

In its veterinary guidelines for spay-neuter programs, the Association of Shelter Veterinarians describes high-quality, high-volume spay-neuter programs as the best approach for reducing shelter impoundment and euthanasia of cats and dogs. "By engaging in this rapidly developing practice area, veterinarians can play vital roles in alleviating overpopulation and decreasing untimely euthanasia of cats and dogs, while providing HQHVSN services to cats and dogs that would otherwise be unlikely to receive such care," the guidelines state.

Dr. Cristie Kamiya is chief of shelter medicine for Humane Society Silicon Valley in Milpitas, California, and a member of the ASV board of directors. She says communities with access to spay-neuter services tend to have lower shelter intake and higher adoption rates, compared with rates for communities with little to no access to spay-neuter services. "It's these areas where you have higher shelter intakes," Dr. Kamiya said.

Income is also a factor in pet overpopulation. A report published by the Access to Veterinary Care Coalition in 2018 stated that households with income less than 138 percent of the poverty level were less likely than higher-income households to own sterilized cats and dogs. Moreover, low-income pet owners more often acquired their animals as strays, which typically aren't spayed or neutered. In contrast, pets owned by households with income higher than 250 percent of the poverty level were more likely to be sterilized and obtained from pet stores, breeders, animal shelters, and rescues. Purchasing or adopting a cat or dog from these sources is often contingent upon spaying or neutering the animal.

In communities where the population of unwanted cats and dogs can reach crisis levels, targeted spay-neuter programs that are free or low-cost are desperately needed, according to Dr. Kamiya. She says the ASV guidelines, originally published in 2008 and updated in 2016, establish standards for high-volume spay-neuter programs to help maximize efficiency and provide high quality evidence-based care (J Am Vet Med Assoc 2016;249:165–188).

"The quality of care probably runs the gamut from poor to high quality and a lot in between," Dr. Kamiya said about the multitude of spay-neuter operations, but a majority of them are getting it right. The ASPCA Spay/Neuter Alliance falls in the high-quality category, she added.

More than 1,500 veterinarians from the U.S. and around the world have participated in the Veterinarian Training program at the Spay/Neuter Alliance since 2009. For four days, trainees work with a veterinary instructor on safe and efficient spay-neuter procedures and techniques that they can use in private practice or when working with rescue organizations or animal shelters.

Dr. Lindsay Henschel oversees veterinary training at the alliance along with the low-cost spay-neuter program for the public. Typical trainees begin the program able to spay a cat within 45 minutes. When they finish, they know how to cut their surgery time in half.

"You want the surgery to be as efficient as possible so you're not wasting any time. You want it to be quick because that's less time the animal's under anesthesia. And the quicker you work, the more animals you can perform surgery on," Dr. Henschel explained.

"The fact is, you can be efficient and gentle at the same time," she continued. "We're talking about soft tissue handling, so many of those skills we teach here can be applied to other soft tissue surgeries."

Dr. Henschel says some veterinarians take the surgery program for reasons other than alleviating animal overpopulation. They want to increase practice productivity by performing more surgeries in the same amount of time. Or they are transitioning from large animal medicine to companion animal practice and want to brush up on their small animal surgery skills.

"Their goals may not always be the same as ours, but we want to teach them, and we want them to take these techniques with them," Dr. Henschel said.

The motivations of the veterinary students who participate in the externship program also vary. Students from every AVMA Council on Education–accredited veterinary college have come through the two-week program since its creation in 2010, with more than 1,731 participants to date.

Jennifer Lyons plans for a career in companion animal medicine after she graduates from Auburn University College of Veterinary Medicine this year. She saw the externship as an opportunity to get more surgery time.

"We just don't get a lot of surgery experience as students," Lyons said. "I think a lot of the veterinarians looking to hire, they ask 'How are you with surgery? What's your experience?' I think my time here will help them feel more confident in me and, vice versa, more confident in myself."

Dr. Saxton, who oversees the extern program, says students occasionally balk at the singular focus on spay-neuter procedures and techniques. "We get some patients with skin conditions or some such condition, and the students want to stop and treat it," she explained. "I tell them we'll notify the shelter, and the shelter can consult their regular veterinarian, because if we stop to treat that condition, that's six cats we probably won't spay today."

Visit the American Society for the Prevention of Cruelty to Animals' Spay/Neuter Alliance website for more information.

Correction: An earlier version of this article misspelled the names of Drs. Lindsay Henschel and Chip Saxton. The article also gave the incorrect number of buildings on the American Society for the Prevention of Cruelty to Animals' Spay/Neuter Alliance campus. Further, the article should not have stated that a total of a thousand people have participated in the alliance's training programs.