FBI gathers animal cruelty data, but patterns have yet to emerge 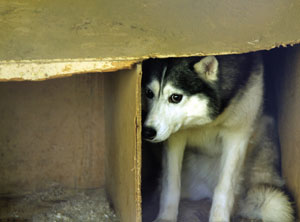 The FBI has published the first two years' worth of data on animal cruelty, but patterns may take several more years to emerge.

The 2016 and 2017 data come from police departments serving about one-third of the U.S. population.

An FBI spokeswoman provided a statement that law enforcement agencies are collecting and sending detailed information for each instance of cruelty, including notes on times, locations, weapons involved, and connected criminal activities. The FBI's Uniform Crime Reporting system will help them see trends in the types and severity of cruelty and the circumstances surrounding these crimes.

"Currently, a national trend is not possible, as the FBI UCR program has not collected enough data," the statement says.

Law enforcement agencies will need to give the UCR program data for two to five years before the FBI can use it to establish trends.

The FBI is transitioning its crime data collection from a legacy summary reporting system to the more detailed National Incident Based Reporting System. Agencies can transition ahead of the 2021 deadline, but most haven't.

Since 2016, law enforcement agencies using NIBRS have reported animal cruelty as its own offense, rather than including it in the "All other offenses" category.

The data collected so far show, at least, a rise in reporting on animal cruelty.

The data also may provide some insights into the types of crimes officers report seeing.

Officers arrested about 760 people for animal cruelty in 2017, of whom 96 percent were adults. About 70 percent of known animal cruelty instances occurred in homes. Only about 3 percent involved suspected drug or alcohol use.

Developing useful data likely will take years, and some states will probably have better data sooner than others, said Mary Lou Randour, PhD, senior adviser for animal cruelty programs and training at the Animal Welfare Institute. Getting better data will involve reaching agencies that are outside police departments but respond to crimes against animals, she added.

Randall Lockwood, PhD, who is senior vice president of anti-cruelty special projects at the American Society for the Prevention of Cruelty to Animals, said he has seen detailed data in NIBRS, and it's obvious the reports represent only a fraction of the number of actual crimes.

The 2016 data, for example, included only 12 instances of organized animal cruelty, the category for animal fighting, he said. The ASPCA alone investigated more fighting incidents that year.

The data also may be lacking, in part, because animal cruelty often is investigated by agencies separate from municipal or county police departments. Dr. Lockwood said the agencies tasked with these investigations—animal control departments, public health departments, and local nonprofit organizations, to name a few examples—tend not to collect data in forms accepted by the FBI.

Dr. Randour thinks some of the data collected so far are useful.

Kentucky, for example, has some counties with no animal cruelty reporting. She sees opportunities to convince law enforcement departments to participate and give animal control agencies outside law enforcement methods for reporting data. In 2017, she said, Tennessee had reports on only two categories of cruelty—neglect and intentional abuse—which tells her police in the state probably are missing some crimes of animal fighting and sexual abuse of animals.

Dr. Randour said the AWI had advocated for 12 years to get the FBI to collect and report data on animal cruelty. About 15 years ago, she gave presentations to police officers on the links between animal abuse and other crimes. She took, but couldn't answer, questions on whether crimes against animals were rising or who was most likely to commit those crimes.

If police administrators know where animal fighting occurs, they can work with community organizations to discourage it, Dr. Randour said. Captains can tell officers how to spot signs of fighting and intervene.

The ASPCA is part of the National Link Coalition, which advocates for ways to prevent violence against animals and people. The coalition was among supporters for the effort to gain separate reporting on crimes against animals. ASPCA leaders think the data could help gauge how often such crimes occur, track outcomes, and measure the success of interventions.

Dr. Lockwood expects the data will help show which national regions or even city precincts have disproportionate problems with animal cruelty. The data available to police also distinguish among abuse, animal fighting, and neglect. Plus, individual reports include details of what happened.

The way NIBRS collects incident reports can, for example, show links between domestic violence and animal abuse or between dog fighting and gun and drug violations.

With that information, police officials can better understand these interconnected problems as well as improve their training.

When the FBI made its announcement in early 2016, the agency credited the National Sheriffs' Association as one of the leading advocates for reporting on animal cruelty in FBI data. The association's executive director, Jonathan F. Thompson, was quoted in the announcement as saying that the people who hurt animals also often hurt humans and that patterns of animal abuse can indicate other crimes are occurring.

Attention to those crimes helps society, he said. At press time, the association had not replied to a request for comment.

The sheriffs' association has continued to advocate for having police watch for crimes against animals, publishing in November 2018 a guidance paper, "Animal Cruelty as a Gateway Crime," and this year, the association's magazine, Sheriff & Deputy, published a special issue on animal cruelty.

The 2018 paper describes the NSA's work to tell officers about the dangers of animal abuse and its role as a sign of other criminal behavior. It also touches on the need to make such crimes easier to report, investigate, and prosecute.

"Concerned neighbors are more likely to report suspected animal abuse than they are to report other forms of family violence," the paper states. "Consequently, animal control officers have much easier access to homes than do other law enforcement and social services agents."

A woman who is afraid to report abuse by her partner may report he is cruel to animals. A neighbor may report the animal abuse first, and officers may uncover violence against people.

Police who know the signs of animal abuse can, when responding to domestic violence, ask to see pets in the home. They may see injuries, malnutrition, or signs of fear, as well as use information on pets to decide whether to call child protective services.

She thinks that veterinarians should talk more with staff of organizations that help victims of domestic violence. They can learn about signs of abuse, how to intervene, and what educational materials they could keep in their waiting rooms. 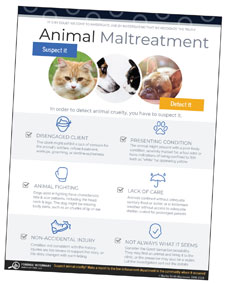 Dr. Martha Smith-Blackmore, president of Forensic Veterinary Investigations, is encouraging veterinarians to identify abuse as part of protecting their patients.

As part of that initiative, she developed an infographic to help veterinarians suspect and detect signs of cruelty.

Dr. Smith-Blackmore said that, in her experience, veterinarians can be reluctant to consider abuse as a likely cause of injury, and those who suspect abuse can be hesitant to report it. After her lectures on veterinary forensics and animal cruelty, she is asked most often how to tell when suspicions are strong enough to warrant a report to authorities. When veterinarians have that question, she said, they should file a report.

The document is available in English and Spanish.

Legislation would protect pets of domestic violence victims (May 15, 2015)