Josh Link, a Pennsylvania native, found his home in Alaska's veterinary community. Link will be one of the first to graduate from a 2+2 program that connects the University of Alaska-Fairbanks and the Colorado State University College of Veterinary Medicine & Biomedical Sciences in May. He plans to return to Fairbanks as a general practitioner.

"I joke that one of my professors gave me a sled dog and that was the bait, and I took it," Link said. "There is a culture up there that is really unique, and the veterinary community is right at the center of it."

I think a program like this gets people exposure to those areas and helps retain people that already live there. ... I had never been to Alaska before I went to veterinary school there, and I fell in love with the place. Not all my classmates are coming back, but my classmates that are want to be there.

Josh Link, a student in the 2+2 program that connects the Colorado State University School of Veterinary Medicine & Biomedical Sciences with the University of Alaska-Fairbanks

Link said the 2+2 program connecting UAF and CSU properly prepares people for the rigors they will face in Alaska, where during the winter, it can hit 50 below zero, with as little as two hours of light during the day.

"I think a program like this gets people exposure to those areas and helps retain people that already live there," Link said.

The UAF-CSU 2+2 program accepts 10 students each year. It is just one of several across the U.S. Other 2+2 and related programs include the following:

First of its kind

"The idea was that we would be able to combine the resources of Iowa and Nebraska to prepare more highly qualified veterinarians," said Jared Danielson, PhD, associate dean of academic and student affairs at ISU's veterinary college.

The first two years of a 2+2 program's curriculum consists of basic sciences and classroom work. The third year, when most students come together at the veterinary college, is more clinically focused with some continued classroom work. The fourth year is typically dedicated to clinical training.

The most expensive portion of a veterinary education is the fourth-year clinical instruction. Thus, the 2+2 program between ISU and UNL allowed Nebraska to educate about 26 veterinary students a year in a cost-effective way, while leveraging existing expertise and educational facilities at UNL, Dr. Danielson said. For Iowa State, the 2+2 has provided quality students who have enriched the program, he said.

The Class of 2019 will receive diplomas that depict the ISU and UNL logos on the document, said Dr. Danielson, to showcase the work that UNL does to educate the students.

The idea for the program at WSU came from Dr. Bryan K. Slinker, dean of WSU's veterinary college, as another alternative to the Western Interstate Commission for Higher Education. WICHE is a 15-member state regional organization that works to improve access to higher education through student exchange programs, allowing students to pay in-state tuition at out-of-state institutions. 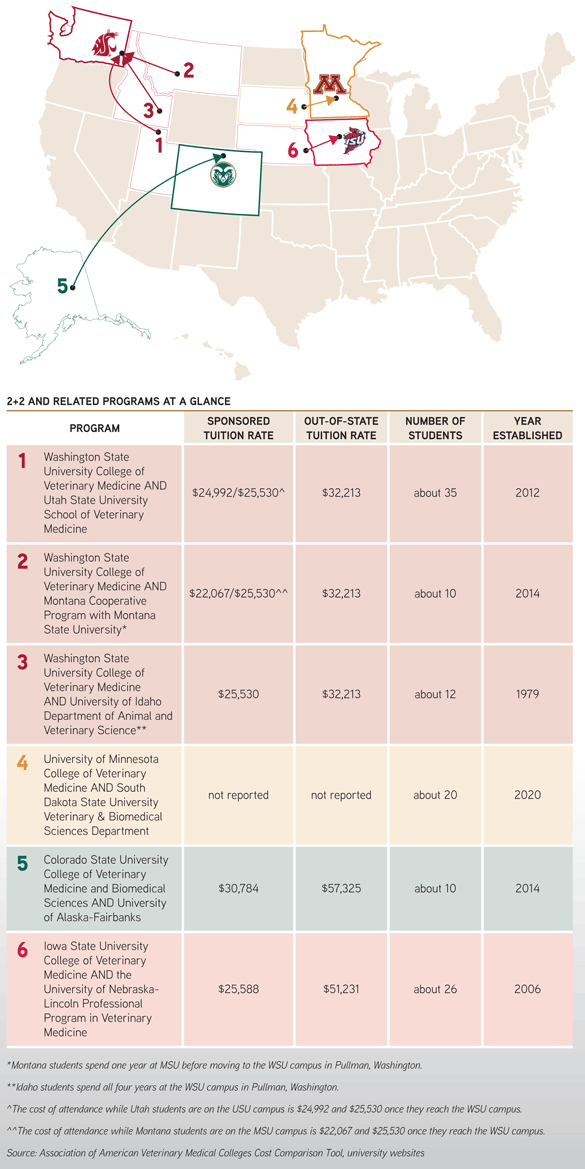 Dr. Bill Dernell, WSU associate dean of veterinary medicine, said, "We are very involved in WICHE, and we are a big supporter of WICHE, but the funding is getting questionable. It's dwindling. A lot of states have decreased WICHE funding. Some states don't know how many positions they will fund until the last minute, which is very difficult from a recruiting standpoint."

For WSU's veterinary college, the possibility of expanding its applicant pool by teaming up with other universities was a pragmatic decision.

"We were seeing our qualified Washington applicant pool decreasing. The number of applications was decreasing, and we don't know why," Dr. Dernell said. "But that was also a part of the impetus (behind the program). If we are thinking about expanding our class size, where do we go? We don't feel comfortable digging deeper into the Washington pool, but what about these stellar students from these other states? Let's go where our power is."

Importantly, 2+2 programs benefit not only students but also the veterinary school financially.

"From a financial standpoint, these programs are very good for us," Dr. Dernell said. "We end up with a lot more tuition from out-of-state students than we do from in-state students. All these students are essentially paying out-of-state tuition. The states are supporting the difference."

Dr. Barry Pittman, Utah state veterinarian since 2015, signs all the state's veterinary accreditation papers. He said he has noticed a jump in the number of veterinarians coming back to work in Utah. The reason for that may be the 2+2 program between USU and WSU veterinary college, he said.

Most program leaders agree that a majority of students report that they have or will return to their home state after graduating.

For example, more than 60 percent of the graduates of the 2+2 program between ISU veterinary college and UNL have returned to Nebraska, Dr. Danielson said, although there is no requirement to do so.

The results are similar at WSU veterinary college.

"The vast majority of Washington resident students will end up somewhere in Washington," Dr. Dernell said. "Most of our Utah resident students end up going back to Utah. … Our Idaho students somewhat spread, but again, most go back to Idaho or close by, and then the same with the Montana students. In a way, the states are seeing what they wanted to see, which was getting veterinarians trained and back to the state."

The Washington-Idaho-Montana-Utah Regional Program in Veterinary Medicine does not require that students return to their home state.

The 2+2 program between CSU veterinary college and UAF also does not obligate veterinary students to return to Alaska.

However, at least five students from the first cohort graduating in May plan to return to the state, said Dr. Karsten Hueffer, associate dean of the Department of Veterinary Medicine at UAF.

According to Josh Link: "A lot of veterinarians in the area have been waiting for this program because (the graduates) have already been to Alaska, lived in Alaska, and are interested in staying in the state."

Before this program, practitioners could hire people from other states, but getting someone to stay for a long time was difficult, he said.

Also, prior to this program, students interested in veterinary medicine who lived in Alaska had to attend a four-year veterinary school elsewhere.

"After those four years, most students were not interested in coming back because they had started new lives in other states and had developed networks and business opportunities and never returned to Alaska," Link said.

In a way, the states are seeing what they wanted to see, which was getting veterinarians trained and back to the state.

One of the goals for the new 2+2 program between South Dakota State and Minnesota's veterinary college was to find a creative solution to the lack of rural and food animal veterinarians in South Dakota. So, SDSU will require some of its students to return to the state.

"The program that we currently have envisioned is that six students would have an obligation to return to the state," said SDSU Provost Dennis Hodge.

A successful 2+2 program requires communication and curriculum planning between the two institutions, according to academic leaders.

"A member of the UNL faculty sits on our curriculum committee, so they contribute to and learn from any discussion we have regarding the curriculum and are aware of any changes that occur," said Dr. Danielson at ISU. "We also have regular oversight of courses to compare objectives. We also use the Veterinary Education Assessment, administered by the International Council for Veterinary Assessment, to give us an independent perspective regarding how well prepared our students are."

WSU surveys its students on a yearly basis. Nearly all have reported no issue in making the transition from their state university to the WSU campus, both personally and academically.

For Josh Link, the transition to Colorado during his third year was easier than he expected. Third-year students at CSU move to the veterinary teaching hospital down the road from the main campus, and so the new area was fresh for everyone.

"We didn't know the facility that well, but a lot of the third-year students when we got there also were unfamiliar with it," he said. "It really went much better than I was expecting."

Link also said CSU veterinary college and UAF work hard to make the 2+2 program work. He said he is optimistic about the future and the continued success of 2+2 programs.

"I had never been to Alaska before I went to veterinary school there, and I fell in love with the place. Not all my classmates are coming back, but my classmates that are want to be there."

Correction: An earlier version of this article misidentified the students in the Yukon Quest photo.