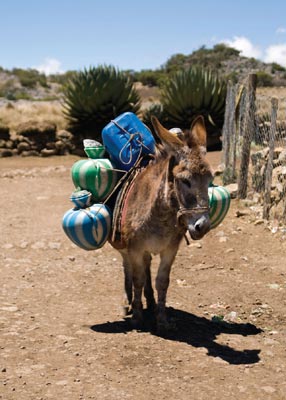 The AVMA recently joined a host of veterinary and animal welfare organizations in condemning the global trade in donkey skins as an inhumane industry that harms communities and threatens the species worldwide.

For centuries, people in China have treated dizziness and other medical conditions with "ejiao," an herbal remedy made with a gelatin obtained by boiling and stewing donkey skin.

Demand for ejiao has spiked dramatically during the past decade, so much so that China now imports donkey skins from around the world, including Brazil and Mexico, and poaching is common. With Africa as the epicenter of the donkey-skin trade, entire areas in West Africa have reported localized donkey extinctions, according to the World Veterinary Association.

The United Nation's Food and Agriculture Organization estimates China's population of donkeys has plummeted from roughly 11 million within recent years to approximately 5.4 million in 2016.

Although China's ejiao industry is investing in donkey breeding programs, consumer demand is not being met. Donkeys are poorly suited to intensive breeding practices because of long gestation periods, low fecundity, low success rates of artificial insemination, and high propensity to abortion and death secondary to stress, the WVA states.

At the Nov. 9, 2018, meeting of the AVMA Board of Directors, members approved a proposal from the Animal Welfare Committee and Committee on International Veterinary Affairs to endorse a statement from the American Association of Equine Practitioners condemning the donkey-skin trade. The AAEP statement reads as follows:

"The American Association of Equine Practitioners joins international equine welfare organizations in condemning the inhumane transport and killing of donkeys to satisfy the escalating global trade in donkey skins. It is estimated that a minimum of 1.8 million donkey skins are traded each year to create a substance known as ejiao, which is used in Chinese beauty products and traditional medicines.

"In addition to welfare concerns for the animals' treatment, this issue is especially devastating in developing countries where donkeys are essential to the livelihoods of millions of the world's poorest people. Families lose their income overnight because of donkey theft. Buying a new animal often is not an option due to rising market prices caused by depopulation. The loss of a donkey also jeopardizes transport of children to school and limits the growth of women in community-related roles.

"The AAEP supports the ongoing work of equine welfare organizations to end the inhumane treatment of donkeys affected by the trade in skins and is committed to creating awareness of this issue within the veterinary community in North America."

Dr. Margo Macpherson, AAEP immediate past president, said: "The AVMA's endorsement strengthens the position's impact in the global arena. We appreciate the AVMA's continued consideration of issues affecting the humane treatment of equids and willingness to work with the AAEP."

In the AVMA committees' proposal, they explain how the poaching of donkeys is increasing the risk of spreading diseases and is severely compromising the welfare of donkeys through poor handling, transportation, and slaughter techniques.

Poaching continues to spread, the recommendation continues, and the AAEP representative to the AVMA Animal Welfare Committee has expressed the AAEP's concerns that the donkey skin trade will reach the United States in the future. This is especially concerning because of the country's vulnerable population of wild burros in Western states.

The WVA has called for a halt of the trade in donkey skins until its impact can be assessed and shown to be both humane for donkeys and sustainable for the communities that depend on them.