Racing and betting on Greyhounds will be illegal in Florida within two years. The state has the greatest number of these tracks among the states.

Jim Gartland, secretary-treasurer of the National Greyhound Association, said administrators at six of Florida's 11 Greyhound tracks have committed to stay open the remaining two years. Most of those planning to continue racing run year-round tracks, whereas most of the seasonal tracks that were closed as of November are unlikely to reopen, he said.

In a statement ahead of the election, Florida VMA leaders wrote that their association, like the AVMA, supports the humane use of animals in racing and other spectator events and urges proper treatment and care for those animals.

The Florida VMA leaders noted that the amendment would affect thousands of Greyhounds. They estimated the total at 8,000, whereas Gartland said it is closer to 4,800. 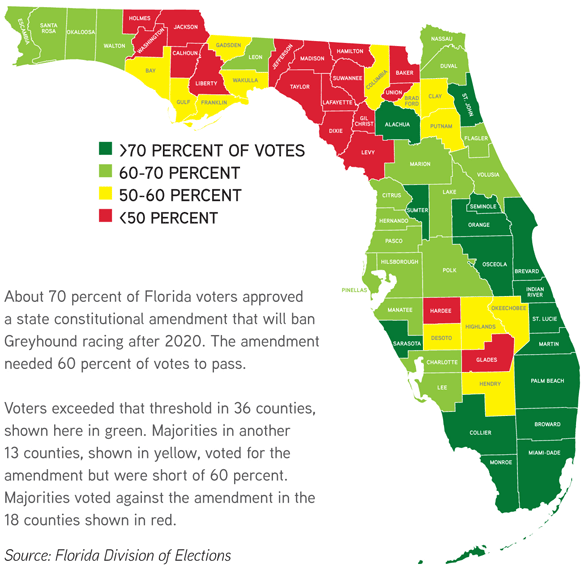 Gartland said his organization is preparing with supporters, including about 100 adoption groups.

Christine A. Dorchak, president and general counsel of GREY2K USA Worldwide, a nonprofit lobbying organization dedicated to passing Greyhound protection laws and ending dog racing, said she drafted the amendment language. Dorchak celebrated that voters united in favor of it. She wants to see Greyhounds be treated like other dogs, rather than subjected to what she described as cruel and dangerous conditions.

Dorchak also expressed confidence that adoption groups could handle the volume of dogs out of Florida, if the owners are willing.

She said Florida is the global hub of Greyhound racing, and tracks elsewhere in the U.S. depend on video feeds from Florida races. Florida races can be more interesting than local ones, and they help make up for short race seasons, especially in Texas, she said.

Rory Goree, president of the Greyhound Pets of America, said in a statement about the vote that there is no urgency in finding homes for dogs because most will continue racing. He also called on organizations that supported the amendment to give money toward the eventual relocation.

Gartland said breeders will raise and train Greyhounds for racing in five other states, but some may scale back or close. Owners of dog farms and kennels also will need to decide whether to continue and how their businesses will change.

Voters supported the amendment by the widest margins in southern and central Florida, according to state totals. Majorities opposed it in pockets of the panhandle and two southern Florida counties, Hardee and Glades.

In Miami-Dade County, the vote count was almost 4:1 in favor of the amendment.