A disease deadly to pigs has spread to at least 29 locations in China.

African swine fever, a highly contagious hemorrhagic disease, has infected pigs in some Chinese provinces with the highest densities of swine production, according to the U.S. Department of Agriculture.

Dr. Tom Burkgren, executive director of the American Association of Swine Veterinarians, said the causative virus is hardy, and there is no vaccine. European and Chinese producers have been unable to stop its spread.

The Food and Agriculture Organization of the United Nations published a warning in September that African swine fever almost certainly will spread in Asia. China raises half the world's pigs and has a half-billion pig population.

The most virulent viral strain is fatal to all infected pigs, although it has no direct effects on human health, FAO information states. It travels through processed and raw pork and live animals, and the virus can survive months in cured or salted pork or in animal feed.

The U.S. lacks surveillance for ASF, so veterinarians' best protection is awareness of the clinical signs, Dr. Burkgren said. Look at any case that might be compatible with ASF, and include the disease in the differential diagnosis, he said.

The virus can cause sudden death with few signs. It also can cause high fever, vomiting, diarrhea, constipation, anorexia, skin hemorrhages, abortion, lost coordination, leukopenia, thrombocytopenia, and red spots on the ear tips, tail, and lower legs or hams, according to the World Organisation for Animal Health (OIE) and information from the Iowa State University College of Veterinary Medicine. 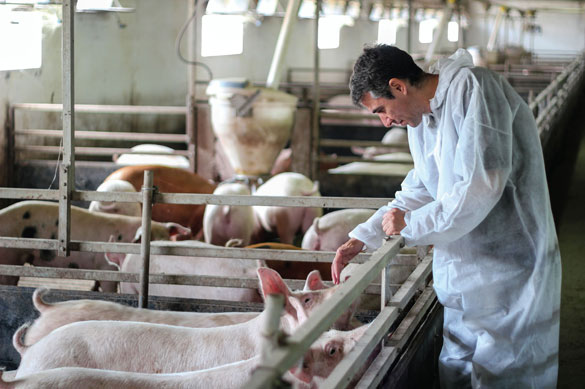 In postmortem examinations, veterinarians may see lesions in many organs, especially the spleen, lymph nodes, kidneys, and heart. A fact sheet (PDF) is available from Iowa State University's Center for Food Safety and Public Health.

In September, officials with the USDA Animal and Plant Health Inspection Service published a document that said they do not know or plan to test how likely it is that ASF could reach the U.S. through contaminated animal feed, which APHIS officials previously said was a likely vehicle for the spread of porcine epidemic diarrhea from China to the U.S. in 2013. PED has killed millions of neonatal pigs.

An article published in March in PLOS One, a journal of the online Public Library of Science, indicates African swine fever virus may be among viruses that could survive in feed ingredients through 30 days of trans-Atlantic shipping from Poland to the U.S., a simulated route chosen because the disease is present in Eastern Europe.

Veterinarians should learn what ingredients their feed suppliers import and what safeguards they use in manufacturing and transportation, Dr. Burkgren said. And veterinarians may find ways to improve clients' biosecurity, such as limiting visits to their farms or eliminating feeding from food waste sources.

Veterinarians also should advise animal caretakers to watch for high death and illness rates and to review their biosecurity protocols. Identifying the first case quickly could be crucial, Dr. Burkgren said.

Researchers are trying to find ingredients that can reduce the viability of viruses in feed, following the example set by at least one product that reduces bacteria survival, Dr. Burkgren said. He noted that an antimicrobial additive, Sal Curb, is used in poultry feed to reduce Salmonella survival.

Even if someone identifies a product effective on viruses in feed, he expects getting Food and Drug Administration approval would take at least a few years.