Veterinary technicians in practice continue to struggle with low pay, compassion fatigue, and burnout as well as a lack of recognition and opportunities for career advancement, according to results from the 2016 National Association of Veterinary Technicians in America survey.

"They are working 50 hours a week, working so hard to make ends meet. A third of techs in the survey had two or three jobs. We're all going to burn out at that level," said Heather Prendergast, co-leader of the Veterinary Nurse Initiative, during this year's Banfield Summit, held Sept. 10-11 in Portland, Oregon. The Veterinary Nurse Initiative seeks to unite veterinary technicians under a single title—registered veterinary nurse—and push for uniform credentialing requirements and a uniform definition of scope of practice. (See story, "What's in a name?")

Prendergast continued, "The value of credentialing is so varied among states, but when there's no pay difference between on-the-job(–trained) or credentialed techs, why go to school and get a $30,000 loan and get paid the same amount as the assistant at $15 an hour?"

Unionization is a way of going after the issues differently than the initiative, said Ken Yagi, co-leader of the VNI, in reference to a few hundred employees at VCA and BluePearl clinics who voted to unionize this past year (see JAVMA, Sept. 1, 2018). He asked, "Why did we have to come down this road that there are such big issues going on? How did we come to this? Why did this happen?"

Kara Burns, president of NAVTA, points to underutilization of veterinary technicians as a major issue. 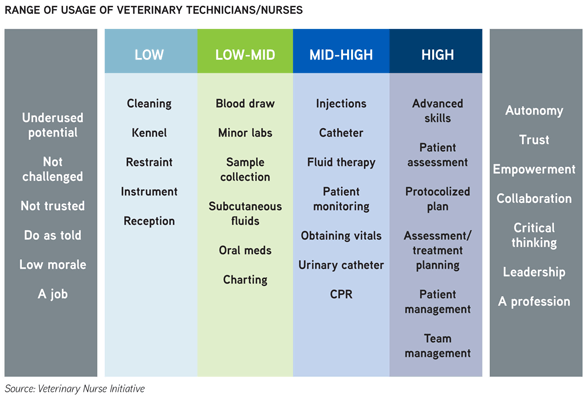 "What use is a credential if they're not being used?" she said. "This goes hand in hand with the VNI. We need to crack this nut sooner than later, or we're not going to have many vet techs left. For me, it's the general practices where we can get proper use of techs. No disrespect, but there shouldn't be the 'I can train them on the job' mentality."

Dr. Daniel Aja, senior vice president and chief medical officer for Banfield Pet Hospital, said at the summit that one of the areas where his company has failed in the past was with veterinary technicians.

Dr. Aja noted that turnover of technicians was at 40 percent annually a few years ago, and now it is at 16 percent.

"But this doesn't solve the broader issue. What is the root cause of the issue? Why aren't they being used like they should?" Dr. Aja asked. "Vets are getting in the way. (Veterinary technicians) are not being used. They are glorified pet holders. (Not wanting to pay more) money is part of it, but they also want to be involved and are not being given a chance. The other is lack of respect. How do we talk about techs? Do people know about their education?"

"We are a proud supporter of the Vet Nurse Initiative. What we have to do throughout the profession is drive a shift. We need all of us together to do it. It's the right thing to do, not the easy thing to do," Dr. Aja said.

See a summary of state laws on veterinary technician duties.

What's in a name?

Correction: An earlier version of this article incorrectly stated the title for Kara Burns.