By Greg Cima and Malinda Larkin

Dr. Christa Hale struggled to stop a giant Percheron horse that took off down a clinic hallway.

"When she did stop, unfortunately, she planted her big, huge, saucer foot on my foot," she said. "And that's how I found out the hard way that steel-toed boots fail." 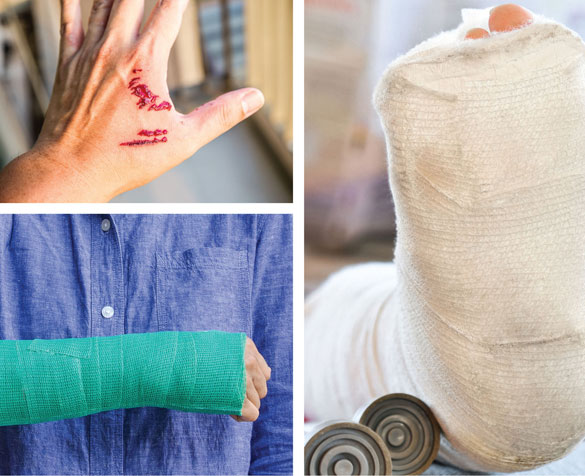 Dr. Hale, then a veterinary student, is a senior epidemiologist at the Centers for Disease Control and Prevention's National Institute for Occupational Safety and Health. The Percheron's step turned her right foot blue and gave her a limp that lasted weeks, her second serious injury while working with animals.

In the first, a bull backed into a broken gate that swung into her face, breaking her nose and blackening both eyes.

A bull backed into a broken gate that swung into Dr. Christa Hale's face, breaking her nose and blackening both eyes. 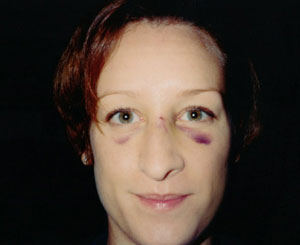 Dr. Hale described her injuries and the profession's injury rate in a presentation at the 2018 AVMA Convention and a follow-up interview. The data she presented show that clinic staff other than veterinarians—veterinary technicians in particular—are at the highest risk of injury.

Data from the AVMA PLIT indicate about three-quarters of worker's compensation claims the company received in 2014-16 involved animal attacks, with most of those claims representing attacks by cats or dogs.

Dr. Angela Hofmann is a veterinarian in San Diego. Early one Saturday in 2016, she was removing a 6-month-old cat from its cage when it bit her right thumb. She cleaned and wrapped the wound, then took the first of two doses of antimicrobials she would have that day.

She spent the next day waiting at an urgent care clinic and an emergency room with a swollen and painful hand, followed by two nights on an intravenous antimicrobial drip in the hospital.

Dr. Hofmann had spayed the cat two days before the bite, and it developed cellulitis along the incision. It seemed friendly, and she assumed it was in little pain.

"I should have had a second person holding the cat, but it was one of those things where I thought I could get her out and do it quickly," she said.

Multiple people now work with each patient at her hospital.

After injuries stemming from animal attacks, strains and sprains were the second most common injuries for technicians and assistants and third most common for veterinarians, for whom exposure to toxic substances was second.

Veterinary technicians filed about 41 percent of claims, veterinary assistants had 23 percent, and veterinarians had 9 percent. Receptionists, groomers, kennel employees, and others filed the remaining claims.

Erin A. Spencer, president-elect of the National Association of Veterinary Technicians in America, said veterinary technicians or veterinary nurses are the clinic staff with their hands on animals most often, making them the default focus of animals' energy when they lash out. She recommended training to reduce patient stress, such as that offered by Fear Free, an organization aimed at preventing and alleviating fear, anxiety, and stress in pets by educating the people who care for them. It is partnering with NAVTA this year for a national workshop series for veterinary professionals.

Across industries, younger workers tend to be at higher risk for work-related injuries, with NIOSH statistics indicating people under age 25 are about twice as likely to be treated in an emergency room for a work-related injury as those over 25.

Dr. Hale said the broken gate that hit her face was a known problem, and she had been asked to hold it. She wasn't confident or trained enough to say it was a bad idea. The Percheron that mashed her foot was one of about 10 she had handled.

"I was probably a little bit out of my depth and, again, young and likely unwilling to speak up for myself," she said.

Being struck by or against objects in the clinic is, for technicians and assistants, the third most common cause of work-related injuries.

Kate Alucard, a first-year veterinary student at Iowa State University, worked as a technician at a mixed animal veterinary clinic in Arizona. As she was moving anesthesia equipment for a dental procedure, part of the equipment became entangled with tubing from another machine. She pulled at the IV pump, which came off the track it was on and fell on her face, along with a metal rod that fell on the top of her head.

In tears and shock, she took only a two-minute break after setting up the machinery. Her manager said to be more careful.

"They should have had a better cap or locking mechanism on the track," she said.

Another day, she pushed a radiography machine and felt a needle hit bone in her hand and, in her head, a sensation like an electric shock. Someone had left an uncapped 18-gauge syringe, used to deliver propofol, atop the machine.

The same veterinarian told her to put on an adhesive bandage.

"Your duty came before your personal safety," she said. "There's the 'If you're crying, you're fine' mantra." 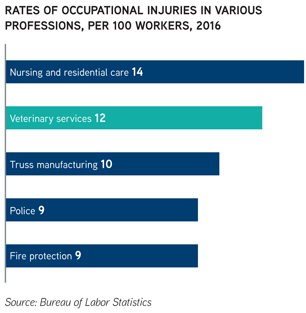 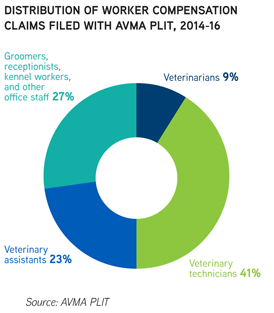 Alucard said the injuries to her face, head, and hand should have been taken seriously by her managers.

Dr. Heather N. Fowler, director of producer and public health for the National Pork Board, said at the AVMA Veterinary Wellbeing Summit this past April that research indicates up to two-thirds of veterinarians and 98 percent of veterinary technicians are injured by animals at some point, and most veterinary workers have been stuck by needles in the past year. But there are also more insidious occupational hazards, she pointed out.

Obstetrics laboratories pose a high risk of zoonotic infections because of the large volumes of fluids in their work, she said. Sound levels in animal shelters regularly exceed 100 dB, and a piglet scream can reach 130 dB. Standards from the Occupational Safety and Health Administration say people should spend less than 15 minutes in a 100 dB environment per day. Yet, employees don't usually wear hearing protection equipment.

"Occupational hearing loss is the only hazard that is 100 percent preventable," Dr. Fowler said.

Awkward postures, repetitive motion, and vibration also can cause injuries that are more costly than acute ones, Dr. Fowler said.

Further complicating matters is that clinics don't often have policies to ensure employees are fully healed before they return to work, she said. 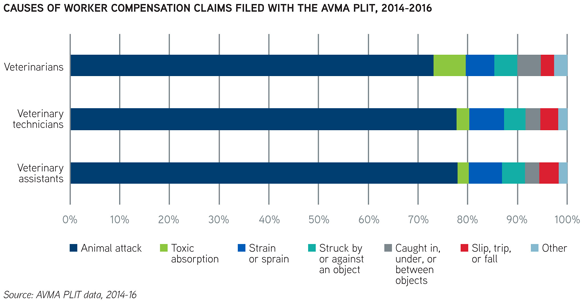 Of the 32,000 injuries in the veterinary services profession reported during 2016, about 3,400 required time away from work, according to BLS data: 1,400 punctures; 500 sprains, strains, or tears; 400 instances of soreness or other pain; 200 carpal tunnel injuries; 200 cuts or lacerations; and hundreds of bruises, fractures, and other injuries for which causes were not identified. Most individuals who needed time off work had injuries to their hands or arms.

Citing OSHA data, Dr. Hale said the veterinary services profession has about three workplace deaths per year and a fatality rate about one-quarter the average for all professions. From 2003-15, 11 people in the profession died by suicide in the workplace, seven were killed by horses or cattle, seven died in car crashes, five were victims of homicides, three died in plane crashes, three were killed in falls, and four died of other causes.

Dr. John Gibbins, chief veterinary officer of the U.S. Public Health Service Commissioned Corps, is a team leader and epidemiologist in NIOSH. In a presentation at the 2018 AVMA Convention, he said hazards in veterinary clinics can be animal, chemical, electrical, pathogenic, noise-related, or radiation-related, among others. They can be something as simple as blocked exits.

Waste anesthetic gas exposure is a recurring problem in human and veterinary medicine and an acute and chronic health risk, Dr. Gibbins said. Clinic workers can develop allergies to the patients they treat. He has known two veterinarians whose vehicles collided with trains at rural crossings. 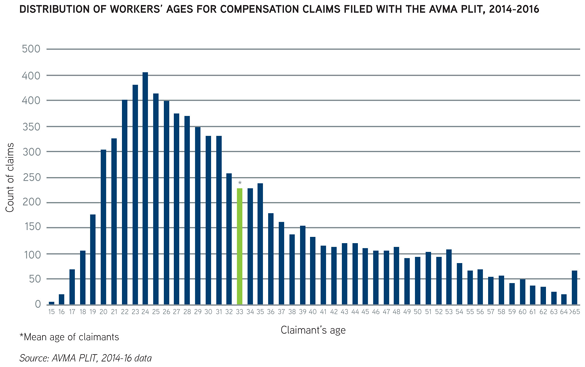 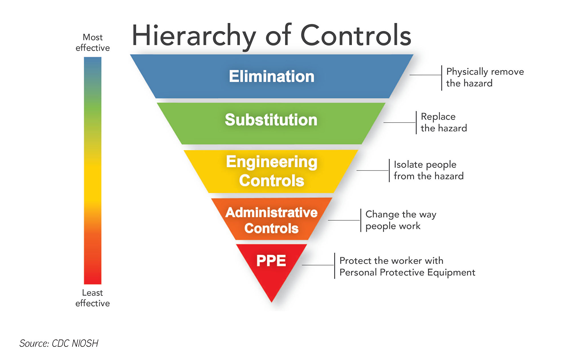 Dr. Hale said other examples include adding animal handling policies and training, switching anesthetic protocols if animals are aggressive when they wake, and using muzzles. Using eye protection around birds and steel-toe boots around large animals are other good precautionary measures.

Staff need education on restraint of all species seen by a clinic, Dr. Gibbins said.

"If you don't train all of your staff on some of these species you may not see all the time, designate a technician or two that are trained on how to handle birds or iguanas," he said.

When he worked in private practice, Dr. Gibbins and other clinic staff warned each other about problem animals.

"We used to draw a pitchfork on the charts, and you would know going into the room to be more careful," he said.

A quiet but stiff dog may seem cooperative, but ear and tail positions are huge signs, she said. A motionless cat, with its tail and feet tucked, may be warning people away.

This summer, Spencer was delivering an intramuscular injection to a cat on the floor in front of her when the cat leapt, all claws out, and left a scratch above her knee. In retrospect, the cat's tail and front legs were tucked, and she had not paid attention to its face.

Spencer said she could have gone to a quieter area, watched the cat's body language, and used a towel wrap with restraint by a second technician, ideally with pheromones on the towel to help the cat relax.

Encouraging a culture of safety with patients also can save time in the long run, she said. Sedating a cat early on, for example, can eliminate 45 minutes of struggle.

Clinic staff also need to protect their backs and knees from injury, Spencer said, describing her own pain from a slipped disk caused by lifting too-heavy dogs.

Document injuries and how they happened, Dr. Gibbins said. When clinic staff members need medical care, he recommends they tell their physicians about their jobs.

Dr. Hale said clinic owners and managers can help protect their workers and create a climate of safety in their practices. Employees should feel safe and free to speak up if they see hazards.

She also recommends wellness and well-being plans to prevent workplace suicides and violence.

A typical veterinarian or practice manager can make a safety and health plan, she said. OSHA's Recommended Practices for Safety and Health Programs can help, but veterinarians may find veterinary industry–focused publications easier to use as starting points.

"Our on-the-job injury rate is really high," she said. "It is often three to four times the national average, and a lot of the injuries that we are seeing are preventable."

Veterinarians and clinic managers who want to reduce workplace risks may want guidance. The following are a few of the available resources:

Study links occupational exposures with risk of miscarriage (May 15, 2008)