Pets to live in apartments at new domestic violence shelter

When a pet is part of a family shattered by domestic violence, the pet's life is in peril and the family faces yet another obstacle to survival.

"Once we heard those statistics, it became clear that pet ownership is an obstacle facing people and families fleeing from domestic violence, and we knew we wanted to become immediately involved," said Dr. Kurt Venator, chief veterinary officer for Purina.

Purina began working with the Urban Resource Institute in New York City in 2013 on its then-new People and Animals Living Safely program. URI has been providing services and shelter for domestic violence survivors since 1980. It created the PALS program in 2012 as a safe place where survivors with pets could recover. Since then, URI has adapted existing apartments in certain URI shelters to accommodate pets. 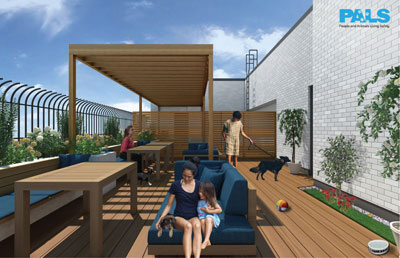 The planned October opening of a seven-story domestic violence shelter in Brooklyn called PALS Place represents a new benchmark. Every apartment and common space was designed and built specifically for family and pet co-living.

Nathaniel Fields, URI president and CEO, said, "PALS Place allowed us to really think about pets and how to design more intentionally. It will be the first of its size in the country where pets can live directly with victims of domestic violence."

PALS Place will be able to serve about 30 families totaling up to a hundred people who have pets. "Over the five years, we've turned down about 350 families due to capacity issues," Fields said.

When you hear these stories of abuse, leveraging the pet to get the abuser what he wants, it brings to life way beyond the statistics the important work URI is doing.

URI won permission from the city and state the following year to pilot one of the institute's largest shelters on a program for victims with small pets other than dogs. Fields said it worked so well that URI was allowed to progress to a standing program and accept dogs under 40 pounds. To create awareness, the institute trained community organizations, and calls began pouring in from victims with pets who had nowhere else to go.

When first planning PALS Place, the URI team of architects and designers sat down with Purina animal behaviorists and veterinarians to create spaces with pets in mind, from the apartment configurations and common spaces to the design elements.

"We consulted on everything from using materials, furniture, lighting, and paint colors to apartment layout. Certain colors are more calming for pets based on their physiology—the fact that dogs are dichromatic and cats are trichromatic and also see in the UVB ultraviolet spectrum," Dr. Venator said.

Besides the Purina Pet Haven, communal areas include rooftop and indoor recreational spaces, a community room, and a pet grooming station.

"We know at the center of domestic violence is power control," Fields said. He told the story of Chowder, one of the first cats to come to a PALS shelter. When the abused woman in the household would go shopping, Fields said, "The abusive partner would call her when she was out longer than anticipated and say, 'If you don't come back, I'm going to hurt Chowder. If you don't come back, I'm going to put Chowder in a microwave. Chowder is in a microwave.'"

Dr. Venator said, "When you hear these stories of abuse, leveraging the pet to get the abuser what he wants, it brings to life—way beyond the statistics—the important work URI is doing. We've heard testimonials of the abuser hanging the pet out the window if the victim would not follow directions."

Victims of domestic violence are in the greatest danger when they leave an abusive situation, according to Fields. That's why shelters have no identifying signs outside, and PALS partners with each survivor to create a security plan to keep families safe if they take children to school, for example.

"Oftentimes the abusers will try to track down their victims, sometimes even hire private investigators. So the concept of taking your dog outside these safe walls isn't an option," Dr. Venator said. As a solution, Purina Pet Havens were created at PALS Place and two other facilities. Outfitted with artificial turf and play equipment, these enclosed open-air spaces encourage exercise, play, and bonding time.

"One of the things we have to be cognizant of is you may have to transfer at some point from your original veterinarian due to the fact your abuser may be standing outside the office waiting for you," Dr. Venator said. "This is a situation in which confidentiality and transition of that veterinary care is extremely important."

Victims often flee in the middle of the night with nothing, so Purina also provides pets with food, crates, beds, water bowls, collars, leashes, toys, litter, treats, and other supplies.

Rita Garza, a marketing strategist with 25 years' experience in the domestic violence field, worked with URI on PALS and remains a consultant. "URI developed an entire ecosystem on how to address the needs of family with pets in a domestic violence shelter," she said. "Every living being goes through a comprehensive assessment on entering the shelter, including the pets."

Safety within the walls has been covered through thoughtful planning, Dr. Venator said. Pets receive behavioral assessments. Staff members and families are educated about protocols involving pet interactions. General safety rules cover pets in the spaces that are common to adults and children.

"One of the concerns we discussed with URI from the start was making sure these pets are in good health, are appropriately vaccinated, have no communicable diseases, and are behaviorally suited to that environment. Through their partnerships with local veterinarians, the (American Society for the Prevention of Cruelty to Animals), and a host of other groups, they've done an amazing job," he said.

A network, a movement

"Our goal with the launch of PALS Place is not only to highlight the innovation around the structure and what the staff are doing, it's to provide other domestic violence shelters across the country with the energy, knowledge, and information to become pet-friendly as well," Dr. Venator said.

He said the PALS experience shows that as long as a shelter has an educational plan and a protocol in place, it can overcome obstacles to having pets in domestic violence shelters, whether that's bureaucratic red tape or concerns about potential aggression by pets that were abused. Plus, having a collaborative effort among government, nonprofit, and for-profit organizations, along with a combination of public and private funds, has proved key to the success of the PALS program.

"It speaks beyond the monetary investment to also leveraging the shared intellectual capital," he said.

Fields said, "We have to work with the community in terms of increasing awareness and forming partnerships to work with victims of domestic violence, from the animal welfare community to veterinarians to the criminal justice system and police departments. We want to engage veterinarians more, the way we did with the medical profession. When someone is seeking veterinary services and the pet's been injured, how can they recognize domestic violence in that situation and train them to respond without creating any harm?"

As Dr. Venator talks about this movement with student ambassadors from veterinary schools, he sees many students struck by the power of the survivors' stories. "From a veterinary standpoint, we'd like to create this energy early in their life cycle as veterinarians so they're learning about it in their classrooms, and when they graduate, they know how to recognize abuse as well as point individuals, families, and pets to shelters that are pet-friendly," he said.

Dr. Venator noted that the collaboration among URI, Purina, other associations, government agencies, nonprofits, and veterinarians resulted in a network that informed a URI white paper in 2015 highlighting the steps a domestic violence shelter can take to become pet-friendly. When PALS Place opens this fall, URI plans to release a resource toolkit to further assist other shelters. Several organizations are supporting this effort, including Purina.

"We want to help victims escape domestic violence in any model," Dr. Venator stressed. "I think the gold standard people look to is co-living … but there are other models out there across the nation." (See story.)

Fields said the co-living model means that victims of domestic violence do not have to be separated from their pets, but he, too, acknowledged the value of other models. "Some will build a kennel attached to the shelter or within the shelter; some will foster the pet while the family is in service. In the sense of therapeutic value, the unconditional love that comes from having access to your pet is unparalleled," he said.

Partnerships are just as important when it comes to cobbling together program funding.

Fields said there is no out-of-pocket cost for human victims at domestic violence shelters, except the tremendous cost of moving from one's neighborhood and being in hiding. Funding for a shelter stay on the human side comes from New York state and local districts, with a small percentage from the federal government, but there is no funding to support pets.

"Through philanthropy, we engage closely with the animal welfare community," Fields said. "The pet part is so innovative and new that we have yet to be able to attach government support."

Fields and Dr. Venator have been working on Capitol Hill toward passage of the Pets and Women Safety Act (see story). Dr. Venator said, "It would really do two things: It would provide federal funding for domestic violence shelters to become pet-friendly, and it would enhance protection rights for pets in domestic violence situations."

Garza said, "You need all types of funding to support something like this. Domestic violence organizations around the country are very under-resourced. When you add the pet component, it can be overwhelming. Corporate partners are essential, foundation funding is essential, individual donors are essential. The more we build awareness, the more the communities will support (pet-friendly shelters). You can piece together resources and be innovative (through) layers of local, city, and state funding, whatever is available."