A disease deadly to poultry had spread to about 100 backyard chicken flocks in Southern California by mid-August.

Virulent Newcastle disease, first found May 17, has infected chickens in Los Angeles, San Bernardino, Riverside, and Ventura counties, according to the U.S. Department of Agriculture. At least one turkey flock also had infections.

Several poultry production facilities were briefly quarantined because they were close to infected birds, but commercial poultry flocks remain free from the disease.

Dr. Annette Jones, California state veterinarian, said the infections have occurred among chickens raised at homes on the outskirts of Los Angeles. Former farms and stables have become extensions of the city, but those areas still have dense pockets of animals, including goats, pigs, and menageries of birds such as chickens, pigeons, and peacocks. The outbreak has spread across areas that vary by wealth and culture.

Los Angeles is a center for specialty bird breeders, likely in part because of the city's year-round warm weather, she said. Small chicken farms and slaughterhouses supply local food and fill niche markets, and all remain free from the disease.

In flocks at homes, though, most of the Newcastle disease virus replication and transmission is occurring through chickens, she said. Other species that are less susceptible likely have lesser roles in disease spread.

Newcastle can spread through feces, feathers, eggshells, and respiratory secretions, as well as fomites such as clothing or vehicles. It affects at least 250 bird species in 27 orders, according to a 2013 USDA Animal and Plant Health Inspection Service manual on the disease.

"Because of the ND reservoir in wild birds and the ability of this virus to mutate, minimizing contact between domestic and wild birds is fundamental to preventing ND infection in the U.S. domestic poultry population," it states.

Infections can kill entire flocks of unvaccinated poultry. Any survivors may have twisted necks, head tremors, or other permanent neurologic damage, the APHIS manual states.

Even vaccinated poultry can be affected, laying fewer eggs following infection, and eggs that are laid may be misshapen or lighter in color. 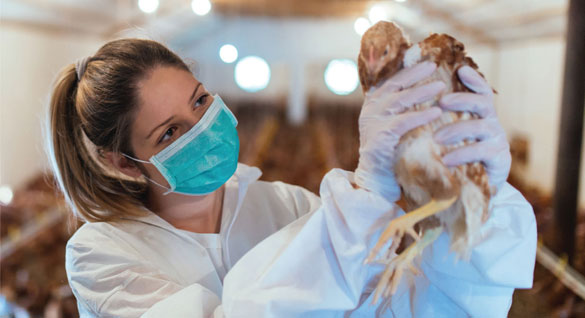 In people, the virus can cause eye irritation and flu-like symptoms. Severe infections have caused lasting eye damage.

The most recent prior outbreak in the U.S. occurred in 2002 and 2003, starting among backyard flocks in California before spreading to commercial facilities.

Some of the same communities with Newcastle infections this year had them during the 2002-03 outbreak, Dr. Jones said. California Department of Food and Agriculture authorities have been trying to alleviate fears that have, for example, led people to move their birds to relatives' houses because government authorities were coming.

The department has been educating people in affected communities, repeating messages at feed stores, church services, veterinary clinics, swap meets, auctions, and on Facebook, Twitter, and YouTube, Dr. Jones said. By interacting with people and teaching them, state employees find the disease.

The CDFA and USDA also are performing surveillance, diagnostic testing, and euthanasia. Authorities and bird owners are limited in how much they can clean surfaces—such as the dirt where chickens live—and the state is requiring that people leave 120 days between when carcasses are removed and when new birds are brought in. That fallow period, Dr. Jones said, is adequate to prevent new infections.

She said the state also is working with commercial poultry producers to review biosecurity plans, and industry members have been performing their own surveillance and testing.

CDFA and APHIS officials are working together at homes, whether through survey teams that ask people whether they have birds with signs of disease or through diagnostic teams and response teams that euthanize affected birds or by giving owners information on how to properly clean and disinfect. Federal and state employees also have been removing carcasses and other materials most likely to transmit the virus.

Veterinarians have been the first to identify the two most recent Newcastle disease outbreaks, Dr. Jones said. An avian veterinarian recognized the clinical signs in a chicken early enough during this outbreak that it is on pace to affect far fewer birds than the 2002-03 one. Private practitioners are invaluable for disease detection, she said.

Dr. Jones encouraged veterinarians to consider foreign animal diseases and any highly contagious diseases as possible causes for illnesses, as well as ensure their clinics can keep patients separated. That will help not only reduce exposure but also reduce the burdens of cleaning, disinfection, and testing if a patient has Newcastle disease.