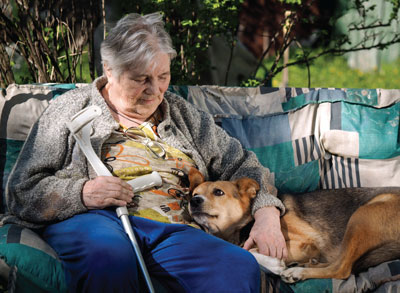 A nationwide initiative aims to help low-income pet owners gain access to veterinary care and has received nearly $3 million in funding to get started.

Dr. Michael Blackwell, director of the Program for Pet Health Equity at the University of Tennessee College of Social Work, announced the creation of AlignCare on July 13 during a session at AVMA Convention 2018 in Denver.

"We need better programs," Dr. Blackwell said. "I'm looking at the tens of millions of animals under the threat of premature death because we haven't figured out a better way to reach them."

The university announced on July 30 that the college has received a $2.8 million grant from Maddie's Fund to support research and development for AlignCare, a health care system designed to improve access to veterinary care for underserved families.

AlignCare is a three-year project that will provide community-based financial support so selected families' pets can receive basic care from enrolled providers. Through social services, public health programs, and nonprofits, pet owners will be screened to identify those who need priority support because of the mental and emotional health aspects of the relationships they share with their pets and their economic need. Once these owners are identified, their information will be passed along to AlignCare.

Participants will pay a co-pay for provided veterinary services calculated on a sliding scale. A subsidy will then be paid by the AlignCare fund directly to enrolled providers, who deliver the services at a discounted rate. Funding is anticipated from private sources, including foundations, corporations, and individual donations.

Dr. Blackwell said this first year will involve building the framework, including developing policies and procedures, defining what services will be covered, creating a 501(c)(3), and getting other professionals on board.

He estimated the spectrum of care provided will not include services such as advanced cancer care but will cover issues such as vomiting, diarrhea, and intestinal obstructions.

He said, "When you have limited resources, you have to make tough choices on how they will be applied to get a most favorable outcome for the community," something he learned working in public service.

In the second year, AlignCare will be implemented in 10 communities across the U.S. The third year is organized with the anticipation that most communities will participate in this structured, managed care approach.

Dr. Blackwell said one compelling reason for the program is that between the explosion in the number of ticks and the growing interface between wildlife and domestic animals caused by suburban expansion, it's not a good idea to have a large population of animals that aren't under any veterinary care.

"This is a recipe for a national security problem with respect to disease prevention and control—or lack thereof," he said. "It's not just touchy-feely stuff. There's also the health of the community, in general, with inadequate health care."

Dr. Blackwell also noted that most veterinarians try to figure out a way to meet the patient's need, but at some point, that's not enough. "From one patient to the next, there isn't consistency in how you get to those decisions," he said. Further, although nonprofits meet the needs of low-income pet owners in some communities, the services provided are largely geared toward wellness, such as vaccines and spay-neuter clinics.

"The system needs to address sick and urgent care," he said. "What happens in between the monthly or yearly clinics?"

The AlignCare project is an outgrowth of work done by the Access to Veterinary Care Coalition, which commissioned a national study of barriers to veterinary care, performed by the Center for Applied Research and Evaluation at the University of Tennessee College of Social Work and funded by Maddie's Fund. The results of that study will be reported by the end of the year.

The report will also include a section on evolving animal laws, the role of pets in the family, and an economic comparison between for-profit and nonprofit veterinary service providers.