The dangers of improper drug disposal 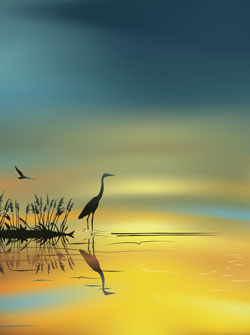 Hundreds of human-made chemicals flow into U.S. streams and waterways. Dana W. Kolpin, a research hydrologist for the U.S. Geologic Survey, said wildlife interacts with those products in unpredictable ways.

"In the real world, a fish or an earthworm or whatever is not just getting hit with one compound at a time," he said. "It's getting hit with this complex soup of contaminants, all of them maybe at low levels.

"And that's the thing: Individually, they may be fine at low levels. But en masse, in this soup mixture, you put them all together and there could be these unintended additive, synergistic effects."

The pharmaceuticals in that mix—and products of their deterioration—arrive in water discharged from wastewater treatment plants, passed through tile drains from manure-fertilized fields, washed off livestock farms, or leached from landfills and septic systems.

"Anything we use, whether it's household or on the farm, has the potential to become an environmental contaminant," Kolpin said. "That's something I've come to appreciate more and more as I dig into this."

One of the bigger concerns is unused drugs that are flushed down the drain.

"How much is from normal use and proper use, and how much is from disposal or improper disposal?" he said. "Those are the really hard numbers to figure out."

Anything we use, whether it's household or on the farm, has the potential to become an environmental contaminant.

Throwing unused medicine into a toilet was a more common practice 20 years ago, he said, but it remains part of today's pollution problem. It also is the easiest source of contamination to reduce.

From 2012-14, USGS and Environmental Protection Agency scientists collected water samples from 38 streams across the country and tested for about 720 human-source contaminants. They found more than 400, including about 230 active drugs and poisons (Environ Sci Technol 2017;51:4792-4802).

The number of contaminants ranged from four in a creek near a small Arkansas town to 161 in the Chicago Sanitary and Ship Canal, with a median of 70. Higher total concentrations correlated with nearness to city wastewater. The contaminants are dangerous to fish, insects, and other life, which can be more sensitive to contamination in low concentrations during development and growth. The pollutants can kill, prevent reproduction, change behavior, and alter appearances, the article states.

In a central Iowa creek near Des Moines, antidepressants discharged from a wastewater treatment plant were found in the brain tissue of white sucker fish up to 8 kilometers away. One of Kolpin's colleagues, a toxicologist, exposed fathead minnow larvae to drug concentrations similar to those in the creek and found that they had slower reactions to simulated predators, he said.

In another study, fish that tend to hide in shadows were drawn to sunlight after exposure to drug concentrations found in waterways, he said. The concern is that these changes may lead to population-level effects.

Boulder Creek in Colorado had high concentrations of several estrogenic chemicals that made male fathead minnows more feminine in appearance, and some developed other male and female characteristics—that is, until operators of a nearby wastewater treatment plant made changes to reduce nutrient content, with a side effect of reducing estrogen concentrations in effluent sent to Boulder Creek. Other studies have shown antidepressants and Β-adrenoceptor blockers can reduce fish fertility and spawning ability.

Dr. Will Sander spent two years as an American Association for the Advancement of Science fellow for the EPA Office of Water, where he was among those trying to learn what pharmaceuticals are present in waterways and their potential human health effects. He now is a senior operations lead in a biologic risk reduction program for the management and consulting company Booz Allen Hamilton.

The pharmaceuticals found have no known effects on human health because the dosage is low, he said. But EPA research (Environ Pollut 2014;184:354-359) shows that antimicrobial concentrations in wastewater effluent may be high enough to create selection pressure and harm beneficial microbes.

Patrick Phillips, also a USGS hydrologist and researcher, said the amount of pressure depends, in part, on wastewater treatment processes. Reducing improper disposal and overall antimicrobial use can reduce that risk, he said.

"Antibiotic resistance is really a big concern," he said. "And I don't know how much antivirals are used in veterinary applications, but, looking at the literature, release of antivirals from wastewater treatment plants has been identified as a concern during pandemics."

The antimicrobials found in USGS water samples include animal-use drugs, such as sulfamethazine, which is used to control infections in livestock and horses. Others, such as the tetracyclines found in river sediment, can have sources in human or animal medicine.

Thousands of pharmaceutical compounds are used in the U.S., but Dr. Sander said the testing methods validated so far cannot detect most. Those found may not reflect which substances are the most common or enduring pollutants.

Phillips is studying the ability of wastewater treatment plants to remove pharmaceuticals and working with biologists to evaluate the presence of trace organic substances that can affect fish health. Wastewater treatment plant operators have no requirements to remove drug ingredients from the water they discharge, but some are trying to remove drugs and other unregulated substances as those operators upgrade their facilities.

Studies in the U.S., Asia, and Europe show wastewater treatment plant discharge is a major source of drug contamination, he said. How much veterinarians contribute, in clinics and on farms, is unknown.

The AVMA responded by developing guidance for veterinarians on how to get rid of unwanted drugs, whether they are opioids, hazardous drugs, or other medicines. EPA officials decided against including veterinarians in the survey.

EPA officials still are working to discourage disposal of drugs down drains, and they are finalizing a proposal to ban pouring hazardous waste down drains at health care facilities, including veterinary clinics. The proposal, first published in September 2015, notes that a health care worker unfamiliar with hazardous waste rules may deal with thousands of health products, including some that pose acute risks. Agency officials are drafting a final version. Dr. Sander thinks most of the contamination comes from human and animal waste that contains unmetabolized or partly metabolized drug ingredients, but people who flush unused medicines contribute. Public education campaigns created decades ago to promote flushing of unused drugs were intended to prevent drug misuse and keep children and pets safe.

"I do think flushing is still a pretty widespread practice because it was messaged out for so long to be the recommended way," he said.

One study in Chicago and surrounding Cook County found about 60 percent of people surveyed threw medicine in their garbage and 31 percent washed it down drains (Ann Pharmacother 2013;47:482-489). Less than 20 percent of respondents said they had received drug disposal instructions.

It's not just an animal issue. It's a human issue, too—human medication—and it'd be great if there could be just a national ad campaign that was directed toward all drugs and made people aware that we need to do whatever we can to minimize what we're throwing in the trash. And, certainly, don't flush.

Dr. Warren Hess, an assistant director in the AVMA Division of Animal and Public Health

Authors of an article about those results wrote that almost all survey respondents had leftover medicines, perhaps from overprescribing or failure to follow directions.

Dr. Warren Hess, an assistant director in the AVMA Division of Animal and Public Health, said veterinarians can reduce leftovers by giving clients the right drugs and amounts, with instructions to complete their animal's treatments.

"It certainly doesn't address the potential of the drugs exiting the body and contaminating the environment, but that's a whole different issue," said Dr. Hess, who previously worked in small animal medicine and with the Utah Department of Agriculture and Food.

Clients can use takeback boxes at some pharmacies or police and fire stations, as well as participate in pharmaceutical takeback events hosted by the Drug Enforcement Administration and local organizations.

Although not preferred, sending drugs to a landfill is better than flushing, Dr. Hess said. The AVMA recommends leaving drugs in bottles when possible, adding cat litter or other safe but unpalatable substances, and sealing the bottles in leakproof containers.

In clinics, hazardous drugs, such as hormonal drugs and chemotherapy drugs hazardous to humans, should be removed through hazardous waste programs along with used needles and intravenous lines, all of which tend to be sent to incinerators. Dr. Hess expects most veterinarians—especially oncologists—have contracts for hazardous waste disposal.

He noted that the DEA already has requirements for opioid disposal. The United States Pharmacopeia General Chapter 800 lists other types of hazardous pharmaceuticals that should be sent out with other dangerous medical waste.

"It's not just an animal issue," Dr. Hess said. "It's a human issue, too—human medication—and it'd be great if there could be just a national ad campaign that was directed toward all drugs and made people aware that we need to do whatever we can to minimize what we're throwing in the trash. And, certainly, don't flush."