Wisdom Health and Genoscoper Laboratories, which offer genetic tests for dogs and cats, published "Frequency and distribution of 152 genetic disease variants in over 100,000 mixed breed and purebred dogs" on April 30 in PLOS Genetics, an online journal of the Public Library of Science. 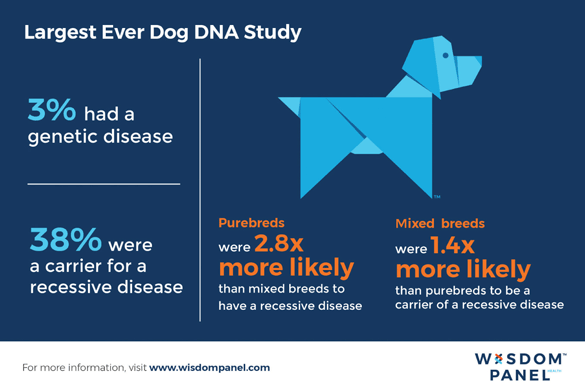 "There has been a long-standing perception that mixed breed dogs are less disease-prone than purebred dogs," said Dr. Cindy Cole, general manager at Wisdom Health, in an announcement about the study. "This DNA-testing–based evidence shows that while mixed breed dogs are in fact less likely than purebreds to develop the recessive disorders evaluated in the study, they may still be carriers."

The ocular, nervous, and circulatory systems were the most commonly affected across both the purebred and mixed-breed dog populations in the study.