Child care can be a headache, whether it's finding a day care that covers work hours, filling in for a co-worker who is out caring for a sick kid, or being able to afford a child care provider in the first place.

For most, these problems are simply a fact of life. Every week in the United States, nearly 11 million children younger than five are in some type of child care arrangement, with children spending, on average, 36 hours a week in child care. Although costs vary widely, depending on factors such as the child's age, the care provider's geographic location, and the type of setting (e.g., center versus home), 2014 data compiled by the not-for-profit organization Child Care Aware of America yield mean annual costs nationwide for full-time, center-based care of $9,909 for an infant and $7,943 for a 4-year-old.

One rural Texas veterinary practice owner saw child care not as a problem but as a way to increase employee performance and satisfaction.

"The culture of our practice revolves around family. We approach practice and life as one: We practice life and medicine together," said Dr. Keelan Lewis. The 2011 Virginia-Maryland College of Veterinary Medicine graduate has owned Salt Creek Veterinary Hospital in Olney, Texas, since January 2014. The mixed animal practice—half beef cattle, the rest small animal and equine—is located about 130 miles southwest of Dallas. In 2015, she opened another practice, 40 miles west in Seymour, and in May 2017, she and her dad, Dr. Arn Anderson, bought a practice in Graham, 25 miles south of Olney.

Four veterinarians and 13 support staff rotate among the three clinics, with a fifth veterinarian starting in July. All the staff members are women and half of them have children. Initially, the demands of practice, especially the hours, conflicted with the parents' child care needs. For example, veterinarians on a farm call 40 miles away had difficulty getting to the day care facility in Olney before the required 5:30 p.m. pickup time. And in Texas, where cattle veterinarians like to work early in the morning before it gets too hot, Dr. Lewis had to have clients look for a veterinarian elsewhere if they wanted one to be on their farm before 8 a.m. because the day care providers in town didn't open until 7:30 a.m.

The culture of our practice revolves around family. We approach practice and life as one: We practice life and medicine together.

Dr. Lewis, who with her husband, Kyle, has two boys—Cason, 4, and Phifer, 1—thought, why couldn't she try having a practice-owned day care?

"If a mom is worried about her child who is at a facility she doesn't want them to be in, or is stressfully throwing them in there at 7:30 a.m., is she providing the best quality medicine to patients while she's worried about her kid? No, she's not," Dr. Lewis said. "What is the value of her skills versus, say, a blood machine in the patient getting better? Her brain is more important. If she can't think through what is wrong with that animal because she is distracted, it doesn't matter how many blood machines you have. We don't second- guess buying another truck or another ultrasound or blood machine. Why is this any different?"

Dr. Lewis detailed her efforts to create a practice-owned day care during a panel discussion on workplace well-being at the 2018 Veterinary Wellbeing Summit, April 15-17 in Schaumburg, Illinois (see story). She gave a follow-up interview to JAVMA News. 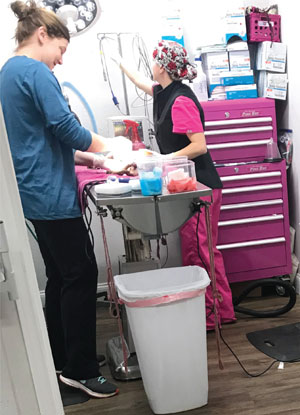 Dr. Lewis says she spent a lot of time on the phone with Texas Health and Human Services, which inspects child care centers and had initially refused her proposal. The department eventually sent an inspector to see Dr. Lewis. He suggested she hire a private nanny instead of creating a certified day care center, which would have been too costly. So, Dr. Lewis, via a limited liability company, bought a two-bedroom home about 2 miles from her Olney hospital and across the street from the local elementary school. Then about a year later in 2015, the clinic hired Shanda Hope as a nanny. She rotated among the mothers' houses for the first nine months while the new home was retrofitted to be what they wanted, including having a room where rotating externs could stay overnight.

"The immediate return for us was an almost instantaneous good feeling about being at work. That trickled down to the entire staff," Dr. Lewis said.

Only employees' children can attend the day care, helping to mitigate liability concerns. Since the day care opened, Hope has cared for around six kids at a time, ages 6 weeks to 5 years. She is a salaried employee of the hospital and receives the same benefits as the rest of the staff. Hope works their hours but has weekends off, along with Thursdays, which coincides with the moms' day off. Otherwise, she is at their disposal.

"If I leave at 6 a.m., she is there at 6 a.m. At the end of the day, we try really hard to be there at 6 p.m. Sometimes, other clinicians will pick up for me or vice versa," Dr. Lewis said. "We just finished bull testing season, so we were up early. We paid her extra for that. She is our most prized employee."

The veterinarians have workarounds for care outside of regular hours. Each veterinarian is on call for emergencies one night a week and every fourth weekend. If one arises, the husband cares for the children. Clinic employees who clean the kennels and walk dogs are also called on to babysit if someone is in a bind. When working Saturday mornings, most of the practitioners bring their kids with them. "The clientele are accustomed to us being a family business. They're used to seeing the kids playing in back while we're examining pets," Dr. Lewis said.

Finally, the parents decide as a group whether a child is too sick to come to the practice-owned day care rather than have a stipulation that a child can't come if they have a temperature, a practice common among many day care centers.

"What would I have done for three days when my son had a 100-degree fever while he was teething? What would the practice have done? They would have been out a vet," Dr. Lewis said.

Employees contribute a portion of their salary for the day care expenses, and the clinic pays the rest. Dr. Lewis says she is trying to decrease the percentage parents pay each year.

If a mom is worried about her child who is at a (day care) facility she doesn't want them to be in, or is stressfully throwing them in there at 7:30 a.m., is she providing the best quality medicine to patients while she's worried about her kid? No, she's not.

Though it is a cost to the practice, Dr. Lewis says she spends less money on the day care than she does on the four work trucks in a year. Plus, the hospital receives tax credits for having a company-provided day care as well as for expenses to fix and maintain the house. This year, she hopes to add a small play place outside.

"We never quantified what that day care was in return monetarily, because for us, it's a solution for a big stressor for our staff, and we're able to pay for it. Maybe we paid for that instead of another improvement for the clinic or benefit for the staff, but it's important," Dr. Lewis said.

Otherwise, the return on investment is employee retention and productivity, she said. It's moms being excited to come to work. That's backed up by a 2014 study published in the Journal of Managerial Psychology that found employee performance was higher and absenteeism was lower among employees using on-site child care than among employees using an off-site center or those who had no children.

According to the 2015 Economic Policy Institute paper "High quality child care is out of reach for working families," the mean annual cost of tuition for an in-state, full-time undergraduate student in a degree-granting public institution ranges from $3,756 in Wyoming to $14,469 in New Hampshire.

When Dr. Lewis presented the idea of a practice-owned day care at the Veterinary Wellbeing Summit, many attendees later asked her in amazement how she did it.

"I never understood how basic, solution-oriented problem-solving would be so novel," Dr. Lewis said. She wonders whether the reason the idea isn't more common is that men still own most clinics and may not be as sensitive to the need as women are, given that women still generally hold the role of caretaker.

"Listen and figure out what your staff actually needs. They may not need a day care. Decide what they need to be happy and do it," she said.