Racing dogs under the care of Charles McClellan and Natasha Nemeth tested positive for cocaine metabolites in race-day urine tests from October 2016 through July 2017, with 18 positive test results occurring under McClellan's care and six under Nemeth's care, according to complaints filed against the trainers. One dog had seven of those positive tests, six of them under McClellan. The Florida Department of Business and Professional Regulation Division of Pari-Mutuel Wagering suspended the trainers' licenses pending further administrative action. 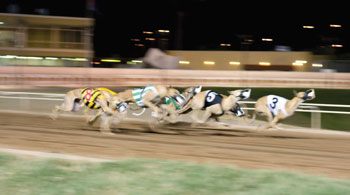 Jennifer Y. Rosenblum, one of the attorneys representing the trainers, said her clients' licenses remained suspended during the appeal, although she is pushing to have those suspensions removed.

The trainers' attorneys argued in administrative court that Florida officials had failed to adopt drug-testing rules through the required process, and the state had failed to set minimum concentrations for enforcement. The judge agreed in separate rulings.

Greyhounds in Florida have tested positive for cocaine or cocaine metabolites at least 230 times in the past 20 years. Dogs under three trainers had 30 of those positive test results within a nine-month span of 2016 and 2017 (see JAVMA, April 1, 2018), although only McClellan and Nemeth are contesting the validity of the state's drug testing rules.

The 230 positive test results are out of more than 700,000 race-day urine samples tested. Court documents and people connected with racing have offered competing explanations of exposures through doping, environmental contamination, and human drug use in kennels, but the exposures have no established cause.

In Florida, a racing-animal trainer is the "absolute insurer" of an animal's condition, which includes results of tests for prohibited substances. The ruling issued in March indicates that, unlike in horse racing, trainers and owners in Greyhound racing can be kept out of contact with their animals hours before race starts.

Rosenblum said her clients, other trainers, and kennel operators have told her they want to see rule and procedure changes that would, for example, have the state collect urine samples while Greyhounds remain under trainers' care.

Rosenblum said cocaine is a common environmental contaminant and potential contaminant on people handling dogs at tracks. She characterized the concentrations of the cocaine metabolite benzoylecgonine detected in dogs under her clients' care as trace amounts too small to reflect contact with harmful amounts of cocaine and below a reasonable threshold for enforcement.

In court documents, attorneys for the wagering division have said drug testing data show no indication of widespread environmental contamination, and dogs are more likely to receive cocaine from a trainer.

State employees collect urine samples before or after Greyhound races, averaging 3,500 a month in the most recent five years for which data are available, July 2011 to June 2016, according to annual reports from the state. In those years—which predate the positive test results under McClellan and Nemeth—the state found a mean of three positive test results for cocaine or cocaine metabolites in samples from Greyhounds each year.

Asked why positive test results would be clustered by time and trainer, Rosenblum said, "It is evident that the state wanted, for whatever reason, to go after the kennel in question." McClellan was the trainer of record at the Steve M. Sarras Kennels until Nemeth took over in spring 2017, and the dogs with positive test results were racing for that kennel, she said.

"You will absolutely see ‘clusters' with environmental contaminants," she said.

A spokeswoman for the wagering division said in two messages her department was working on a response to questions about race-day substance testing and environmental contamination but had not provided those answers by press time.

Rosenblum also said that, after the first positive test results, the state tested dogs from the same kennel before notifying the kennel owner or track. If animal welfare were the top concern, the state would have given the owners, trainers, and track officials opportunities to remedy the problem, she said.

By the time the state had filed that second complaint, samples already taken from dogs under McClellan's care would result in eight more positive test results for cocaine metabolites, including two more involving WW's Flicka, according to the third and fourth complaints. The overlap continued through the fourth and fifth complaints.

According to the complaints against Nemeth, five of the six positive test results from dogs under her care came from samples collected before the state filed its first complaint on June 5, 2017. The sixth involved a sample collected July 3, 2017.

Rosenblum also said cocaine is a short-acting stimulant, and trainers lose access to their dogs up to hours before a race.

"If there were a bad actor out there, they wouldn't choose to give a dog cocaine hours before racing," she said. "Ridiculous."