A 9-year-old mixed-breed dog with a history of renal disease is presented to a general practitioner with signs of lethargy, a lack of appetite, scabbing around its ears and neck, and acute tetraparesis. The owner, an elderly woman accompanied by her adult son, tells the veterinarian she can't live without her dog. The son, concerned about his mother's limited income, insists that no unnecessary tests or treatments be performed. 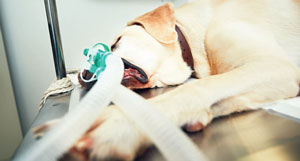 The dog is referred to a specialty center, where MRI reveals a lesion in the cervical spinal cord. Additional diagnostic testing shows the patient is hypertensive and proteinuric and has bacterial and fungal dermatitis. The owner asks that the attending veterinarian do everything possible to keep her pet alive, even if it means the dog will no longer be able to walk.

While explaining treatment options to the client, the attending veterinarian presents euthanasia as a humane alternative. But the client says she isn't ready to part with her pet. Outside the exam room, the son pulls aside another veterinarian and requests that his mother be told her dog has no chance of recovery.

If you were the attending veterinarian, how would you proceed?

Such ethical dilemmas have become increasingly common as pet owners spend hundreds if not thousands of dollars on veterinary care for their animal companions. "A decade ago in veterinary medicine, you could say, ‘This is a 10-year-old dog, and it will cost $5,000 to treat it,' and that would've been a deterrent for a lot of pet owners," said Dr. Steven Marks, director of the NC State Veterinary Hospital. "That's not the case anymore. Now, a 10-year-old dog is treated like a 5-year-old dog, and money is not always a restriction for certain clients."

Everybody wants to do the best thing for the patient, but at times we were being asked to do things we thought crossed the line."

Yet, is it always in the interest of an animal patient to prolong its life? The question, Dr. Marks said, was being asked more and more at the teaching hospital, by staff, faculty, and students. "There were concerns that some of the procedures and treatment management of critically ill patients weren't in the patient's best interest," he explained. "Everybody wants to do the best thing for the patient, but at times we were being asked to do things we thought crossed the line."

Jeannine Moga is a licensed clinical social worker on staff at North Carolina State University College of Veterinary Medicine and its teaching hospital. One of her responsibilities is helping clients and the veterinary team navigate challenges associated with patient care, including any ethical concerns, which are often the most difficult to resolve.

"We have a lot of medical technology, and we can provide the very best care, but are we doing the best we can for the patient? Are we wielding our best tools responsibly?" Moga asked.

"In these cases, I was aware of the amount of distress present, not just in the clients but also in the veterinary team," she said. "These complicated cases are extremely stressful for veterinary practitioners and are often the cases they take home at night."

With an idea for a more formal way for the hospital's veterinary team to resolve ethical issues, Moga contacted Philip Rosoff, MD, a pediatric hematology-oncology specialist at Duke University Medical Center and chair of the hospital's ethics committee. Dr. Rosoff said he was intrigued with Moga's proposal.

Nearly every human medical hospital in the U.S. has an ethics committee or similar mechanism for resolving conflicts ranging from end-of-life decisions to personnel disputes. Ethics committees were nearly nonexistent during the 1960s and '70s. But, rapid developments in medical technology have since made it possible for doctors to keep patients alive despite their having a fatal disease or traumatic injury. Soon enough, it became evident that the ethical component of the medical profession was lagging behind.

Take the case of Karen Quinlan, a 21-year-old woman who in April 1975 was found unconscious and unresponsive following a drug overdose. At St. Clare's Hospital in Denville, New Jersey, Quinlan remained in a state of unresponsive wakefulness while being ventilated with a respirator and fed through a nasogastric tube. After several months, her parents requested that Quinlan be removed from life support and allowed to die because they believed their daughter would never wish to live this way. When the doctors refused, the parents sued, and eventually the New Jersey Supreme Court ruled in their favor. The court also suggested that "ethics committees" composed mostly of physicians could play an advisory role in such cases as an alternative to the courts.

These complicated cases are extremely stressful for veterinary practitioners and are often the cases they take home at night."

Fast-forward to 1992, when the Joint Commis­sion on Accreditation of Healthcare Organ­izations no longer recommended but began requiring that hospitals have some mechanism, such as a committee, for dealing with ethical conflicts.

Before Moga reached out to him, Dr. Rosoff had no idea what kinds of ethical issues veterinarians faced, but he recognized similarities between human and veterinary medicine. "Pet owners love their animals, and that affection produces certain kinds of decision-making that ultimately may not be in the animal's interest," he said.

Yet, he found the differences more striking. "The funding mechanism for medical and surgical interventions in the veterinary world is very similar to the way human medicine operated prior to the 1930s when the first insurance program was created for teachers in Texas. Prior to that, it was an almost absolute libertarian situation in that you get only what you can pay for," Dr. Rosoff explained.

"Quite frankly, I think animal ethics are much more complicated than human ethics because of the moral status of animals," he added. "On the one hand, an animal can be a loved member of the family, and on the other, an animal is something we eat."

Late in 2016, with Dr. Rosoff's input and the support of Dr. Marks and the college administration, Moga established what they believe is a first-of-its-kind clinical ethics committee at the teaching hospital. The committee is made up of three veterinarians and three veterinary technicians representing various divisions of the hospital. Moga is the committee coordinator and the client advocate. Once a month, the committee meets to discuss recent cases, hospital policies, and potential education opportunities for hospital faculty, staff, and students.

Any member of the hospital can request an informal consultation with one or more committee members regarding a current or past case troubling them.

Hospital members may also request a formal consultation if they feel conflicted about a current patient. In these instances, Moga will bring together several members of the committee within 24 hours to meet with the treatment team and review the case history. They will identify ethical concerns, individually and as a group, and discuss ways of addressing the problem.

"A common misconception is the ethics committee decides and dictates the treatment of a patient," said Dr. Christopher Adin, an associate professor of small animal surgery at the NC State CVM and one of the veterinarians on the committee. "What the committee does is facilitate discussion when there are ethical concerns and help the clinicians and staff in the case arrive at options that are the least-worst outcome."

The committee is a vehicle for each member of the veterinary team to speak and be heard as well as a method for the team to develop an action plan with clear goals. "We want the team to talk it through in a structured way such that they know they've done everything they possibly can," Moga said. "If we give people a better idea of how we're going to work through it, they all tend to feel better even if the outcome isn't ideal."

For now, the ethics committee is an internal service available only to teaching hospital members, but the goal is to eventually offer ethical consultations to clients. Moga recognizes that difficult issues pertaining to patient care are not unique to veterinary specialty and tertiary practices, and she hopes the committee will "trickle down" to general practices as well, perhaps in the form of ethics education for clinic staff.