One of the goals of the Veterinary Nurse Initiative, which was launched last year, is to ensure that every veterinary technician is credentialed. The Veterinary Technician National Examination evaluates whether graduates of veterinary technology programs have the entry-level skills needed to practice and be credentialed. For the first time, information about performance on the VTNE by the more than 8,000 yearly graduates has been made public by most of the U.S. and Puerto Rican veterinary technology programs accredited by the AVMA Committee on Veterinary Technician Education and Activities. The data show wide variation in how well each institution prepares its students for the test. 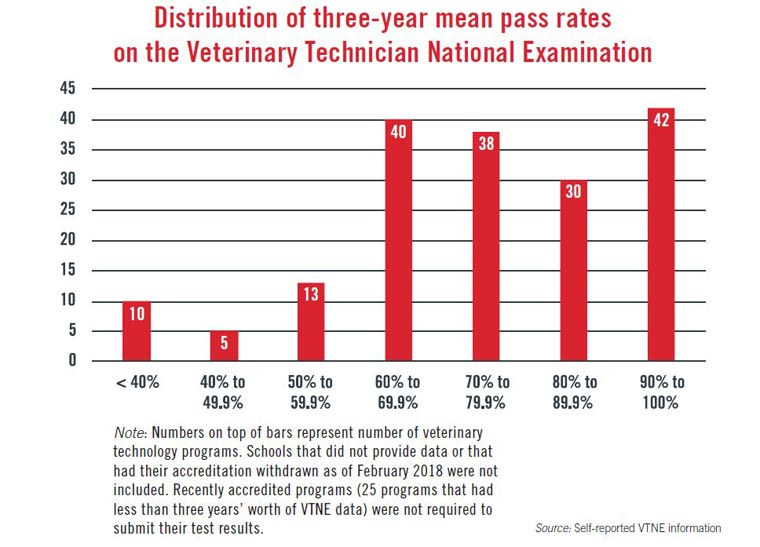 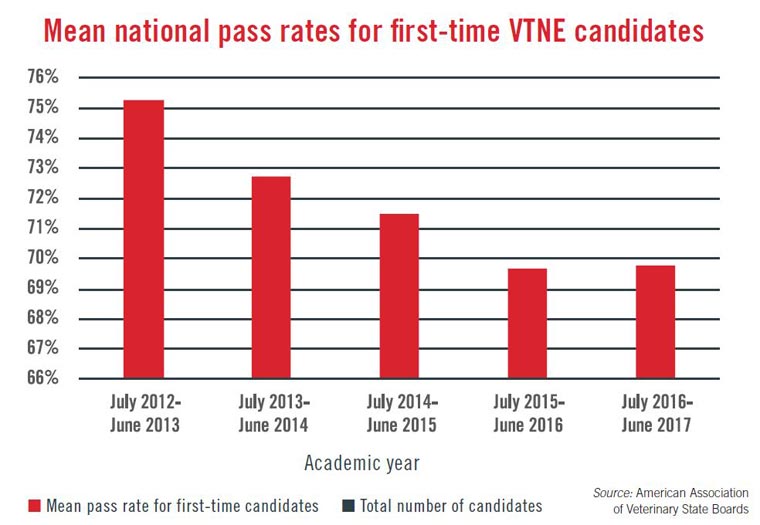 "The color and font of the website came through on the paper they turned in," she said. She failed them; however, the college allowed them to continue their studies. Prendergast quit soon after. The program has since shut down.

"In our area, it was well-known those who came out of a certain school, that you should use caution when considering hiring them," said Prendergast, who lives in New Mexico. "It's a huge problem, and ... even worse is that some students are coming out with $60,000 to $80,000 in debt, and they're making minimum wage. (Veterinary technology programs) are not all equal, but I'm not sure how to make them all equal. CVTEA has set standards in place, but that is not developing equal programs."

Thinking about it from a marketing standpoint for schools, more students will want to go to schools with a higher pass rate. Now, that may turn into a pressure point for schools to teach to the exam rather than educate students on everything they need to be most effective in practice. It's a fine line to tread. With that said, ... people having that information out there and being able to choose the right program for them is helpful.

The AVMA CVTEA, which is charged with accrediting the 204 veterinary technology programs, reviews its standards on a three-year cycle to keep current with contemporary veterinary practice and best accreditation standards. The committee also closely reviews the required elements of the curriculum, both didactic knowledge and psychomotor skills, according to Laura Lien, assistant director in the AVMA's Education and Research Division and staff liaison to the CVTEA. She added that the review process includes gathering stakeholder feedback on current standards and any proposed changes. The committee also receives and reviews feedback from individuals who submit comments to CVTEA staff.

One of the changes the CVTEA made to its Accreditation Policies and Procedures in recent years was to require that every veterinary technology program publicly report data on the number of VTNE-eligible first-time candidates each program had for the preceding three years, the number who took the examination for the first time, and the three-year mean pass percentage. Programs were required to have the information posted by January 2014; however, implementation was delayed to provide programs time to comply. As a result, all CVTEA-accredited programs with at least three years of VTNE data were required to submit copies of VTNE testing results no later than Sept. 23, 2017. Going forward, veterinary technology programs must update their VTNE information by Sept. 1 of each calendar year on the institution's website.

Lien said the requirement was intended to provide transparency and disclosure for program applicants. 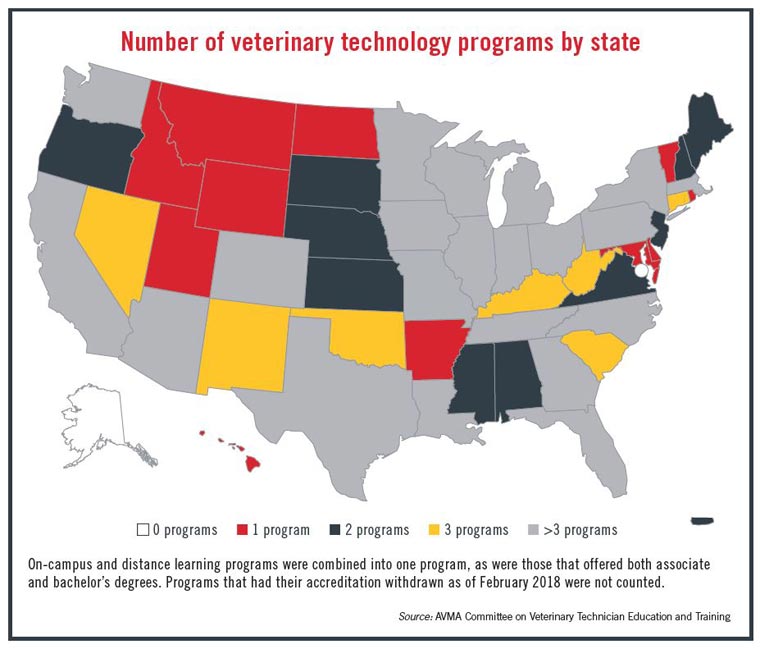 Kenichiro Yagi, a registered veterinary technician at Adobe Animal Hospital in California and an active veterinary technician educator, said, "Thinking about it from a marketing standpoint for schools, more students will want to go to schools with a higher pass rate. Now, that may turn into a pressure point for schools to teach to the exam rather than educate students on everything they need to be most effective in practice. It's a fine line to tread. With that said, it may motivate programs to improve their curriculum, and ultimately, people having that information out there and being able to choose the right program for them is helpful."

The mean three-year national pass rate for the VTNE has been 70.31 percent for first-time takers, according to the American Association of Veterinary State Boards, which proctors the examination. By comparison, the mean pass rate for the National Council Licensure Examination for registered nurses was 87.11 percent in 2017 for U.S.-educated, first-time takers and 72.11 percent for all takers, including those internationally educated.

Most veterinary technology programs' three-year pass rates fall at or above the national mean (including four with a 100 percent three-year mean pass rate). The CVTEA has mandated that a program's three-year mean rolling VTNE pass percentage for first-time test takers must be 50 percent or higher. Compliance is expected by Sept. 1, 2020. Programs not in compliance at that time may be subject to an adverse accreditation status. 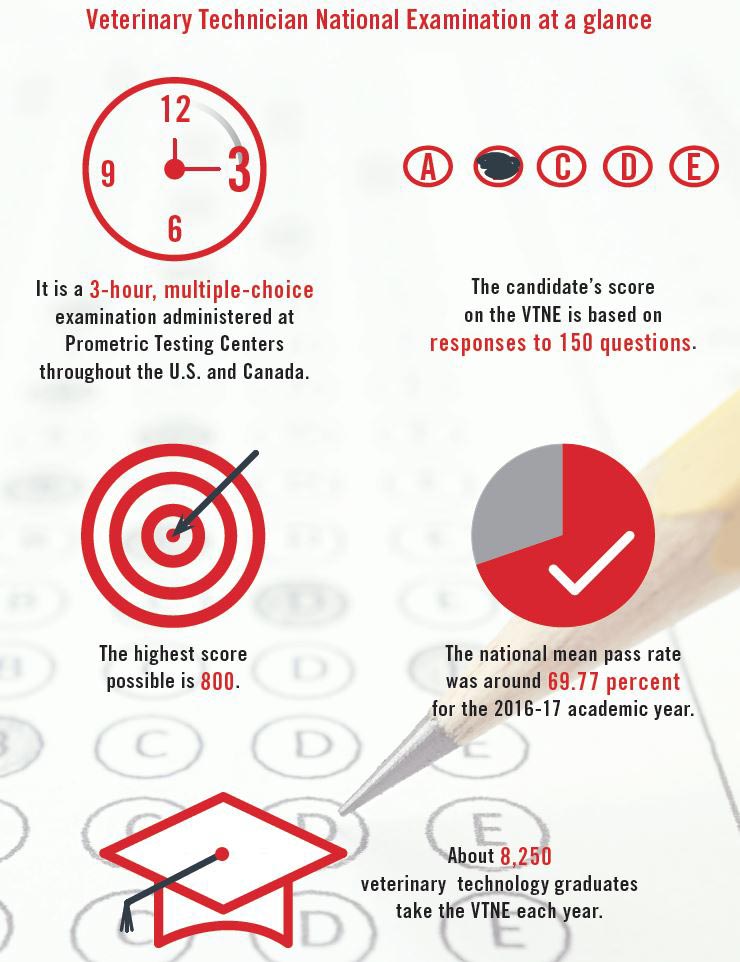 On the basis of publicly available information, 15 programs fall below a 50 percent pass rate. That means the following schools could be in danger of receiving an adverse accreditation status if they do not increase pass rates within about two years: 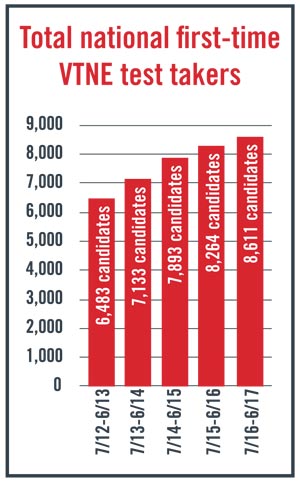 Nine of those are private institutions, and two offer bachelor's degrees. Two programs are on probationary accreditation, and two are on terminal accreditation.

In addition, 13 programs have three-year mean pass rates between 50 and 59.99 percent. That means the following schools are near the cutoff:

Nine of those programs are private, and two offer bachelor's degrees. One program is on terminal accreditation.

Prendergast said that while all veterinary technology programs have standards set forth by the CVTEA built into their curriculum, she's not sure every school is good at applying the curriculum.

"I think we can see that, by some of the differences with those lower versus higher VTNE scores. Some programs are more for the profit, focusing on getting students enrolled, and are not as focused on the education. I think those VTNE scores certainly reflect that in those schools," she said.

Another reason why some programs' graduates may fare better than others has to do with each state's requirements for credentialing veterinary technicians. For example, Becker University in Worcester, Massachusetts, posted this caveat on its website: "The number of eligible graduates who take the VTNE at Becker University is approximately half of the total graduates of the accredited program. Because certification is currently not required for veterinary technicians in Massachusetts, and despite encouraging all eligible candidates to take the exam, many do not."

Some programs are more for the profit, focusing on getting students enrolled, and are not as focused on the education. I think those VTNE scores certainly reflect that in those schools.

Jim Penrod, executive director of the American Association of Veterinary State Boards, thinks the number of test takers would only grow "a bit" if it were a requirement of the state.

"There are 11 states that, although their veterinary technicians are not regulated, they do require the VTNE for a voluntary credential. The majority of those states do have an accredited program in them," Penrod said. "Schools are encouraging students to take the exam. It's the culmination of their degree and signifies they have minimal knowledge to practice. Frankly, the VTNE, while used by accreditation bodies to demonstrate how well a program is doing—a licensure exam isn't meant to do that. It's meant to determine if the individual has the minimal competency to practice without harming animals or the public."

That said, the AAVSB does report to veterinary technology programs with specific breakdowns in the practice areas tested to help inform their instruction efforts.

Prendergast said she's heard comments at Associa­tion of Veterinary Technician Educators meetings that instructors feel the VTNE is too hard and needs to be easier to pass, "which I totally disagree with," she said. "The VTNE is set because it's a national examination. I'm not saying we need to teach to testing standards, but we need to elevate students' knowledge and problem-solving abilities, not increase ease of the test."

On the verge of taking the VTNE for the first time is Christopher Chavez, a second-year student at Maple Woods Community College in Kansas City, Missouri, who graduates in May. He didn't have the benefit of seeing VTNE pass rates when applying to veterinary technology schools. Instead, he relied on a more old-fashioned method: word of mouth.

Chavez said in addition to the location, Maple Woods' reputation was why he chose to go there. Brown Mackie College, a for-profit institution which used to have a campus in Kansas City, did not have a good reputation; it closed last year.

"Some places you don't get an opportunity to work directly with animals at the facility. Maple Woods has 14 dogs and 12 to 14 cats at once, so I was able to work hands-on with animals to practice techniques. Plus, knowing it's accredited by the CVTEA is great, which means they are keeping up to standards as far as skills we're required to learn," Chavez said.

After graduation, he plans to continue working at Perimeter Veterinary Center in Shawnee, Kansas, as a small animal veterinary technician. He originally trained on the job there, but Chavez knew he wanted to be credentialed.

"Vet techs have a huge hands-on role in a pet's care, like before and during anesthesia. As a credentialed vet tech, you just know more and are able to be more efficient and figure out more clinical signs and things that could be going bad after a procedure, for example. Overall, credentialed techs allow for a better experience for pet owners and bring down the number of negative experiences at a hospital," Chavez said.

JAVMA News has compiled the publicly available information on VTNE pass rates (.xlsx) for each program.

Correction: An earlier version of this article gave an incorrect highest possible score for the Veterinary Technician National Examination and the number of programs that are on probationary accreditation and fall below a 50 percent three-year pass rate on the VTNE.