Environment: the bedrock of one health

At first glance, veterinarians' role in environmental health is less apparent than their role in the other two legs of the one-health triad. One health, as defined by the AVMA, is the integrative effort of multiple disciplines working locally, nationally, and globally to attain optimal health for people, animals, and the environment.

The AVMA notes that because of their expertise, veterinarians play critical roles in the health of the environment, but those roles are often overlooked. Veterinary medicine routinely operates at the interface of the three components of one health, with public health and toxicology being among the key areas of expertise veterinarians bring to environmental health. 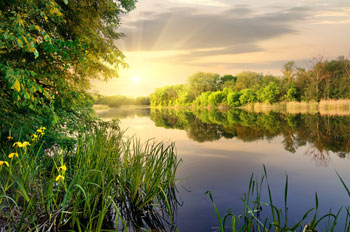 The AVMA established the One Health Initiative in 2007 as a call to action for closer transdisciplinary interactions around the globe, recognizing that the changing environment increases human and animal contact and creates challenges for all three domains. That led to the 2009 chartering of the One Health Commission by eight institutional members and a summit.

At press time, 91 continuing education sessions were planned in the one-health track for AVMA Convention 2018 in Denver, July 13-17. Among the sessions with an environmental focus: Lyme disease, rodent control in urban environments, and zoonotic diseases and aquaculture. View the CE Program at www.avmaconvention.org and search under "one health."

As Earth Day approaches on April 22, the JAVMA News staff is dedicating much of this issue to examples of veterinarians involved in one-health work with a distinct environmental component.

Veterinarians are working with other scientists and public health officials to understand cyanobacteria, ancient organisms present in all bodies of water, and to learn how to protect people and animals from the harmful algal blooms they can cause (see story).

Wild animals live everywhere, sharing the environment with humans and other animals. Zoological institutions and governmental agencies are among the organizations where veterinarians are involved in habitat and ecosystem conservation (see story).

Dr. Fairbrother said: "I would encourage the veterinary profession to be more involved in environmental health beyond wildlife diseases. There are a lot of job opportunities if you're open-minded about where you might want to work."

Operators of potential future fish farms in federal waters off the Gulf of Mexico will need to contract with a veterinarian or certified fish pathologist or health inspector. The AVMA plans to host a meeting this year on the regulatory aspects of veterinarians working in federal waters (see story).

Reproductive problems in animal populations, including developmental abnormalities and behavioral disturbances, have prompted concerns that chemical exposures could be affecting humans and other animals. It is an emerging field that is being led by veterinarians (see story).

Veterinarians have the expertise to adjust protocols for clients when climate change and other environmental factors negatively impact animals. Dr. Warren Hess, staff consultant to the AVMA Committee on Environmental Issues, said, "In my encounters, it's underappreciated what veterinarians can bring to this field. The climate is going to change. From a scientific aspect, our main focus should be on preparation. If we're going to approach the health of the planet, adapting and preparing for what (veterinarians are) involved in should be the AVMA's role, in my opinion."

"If we looked into that, we might find answers to questions we don't even know to ask yet."