Puppies linked to 100-plus Campylobacter illnesses

A retail chain's puppies have been linked to more than 100 illnesses in a two-year Campylobacter outbreak.

The 17-state outbreak is associated with contact with dogs at Petland stores, according to a Jan. 30 outbreak advisory from the Centers for Disease Control and Prevention. From January 2016 through January 2018, 113 people had laboratory-confirmed infections, and 23 were hospitalized.

In a separate bulletin for health care professionals, CDC officials said they had concluded their outbreak investigation but that illnesses may continue because so many people are unaware of the outbreak and risk of infection.

The CDC advised that veterinarians be thorough when cleaning surfaces and equipment that touch the feces of any dog with a suspected Campylobacter infection. The agency also recommended that physicians provide supportive care and antimicrobial susceptibility testing when antimicrobials are required for human patients.

Genetic sequencing and susceptibility testing were used to identify antimicrobial resistance among isolates, the CDC outbreak advisory states. The bacteria isolated from people and puppies were resistant to antimicrobials recommended as first-line treatments for severe Campylobacter infections. 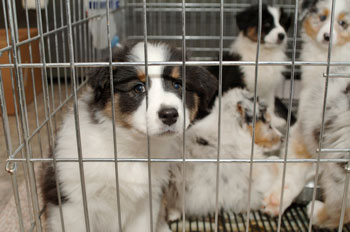 When dogs have laboratory-confirmed infections that involve hemorrhagic fever and require antimicrobial treatment, the CDC recommends using bacteriologic culture and susceptibility test results to guide antimicrobial choices. Campylobacter isolates from the Petland-associated outbreak have been resistant to various antimicrobials, including fluoroquinolones and macrolides.

"Campylobacter jejuni has inherent antibiotic resistance to other commonly prescribed antibiotics such as penicillins, cephalosporins, trimethoprim-sulfamethoxazole, amoxicillin-clavulanic acid, and metronidazole," the CDC advisory states. "Therefore, infections with the outbreak strain may be difficult to treat."

It also states that the multidrug-resistant–bacterial outbreak illustrates the need for responsible administration of antimicrobials to pets.

"Education about best practices for Campylobacter disease prevention, diarrhea management in puppies, and responsible antibiotic use is essential throughout the distribution chain to help prevent the emergence and spread of antibiotic resistance," the advisory states.

The outbreak investigation found ill people had contact with various dog breeds at stores. No common breeder was identified as an infection source.

"Puppies in this outbreak may have become infected at various points along the distribution chain when they had contact with infected puppies from other breeders or distributors during transport to pet store locations," the outbreak advisory summary states. "Enhanced infection prevention measures throughout the distribution chain may help reduce the spread of Campylobacter infections among puppies."

The CDC recommends that veterinarians examine dogs that come from crowded environments or pet stores and have clinical signs of Campylobacter infection, such as bloody mucoid diarrhea. Veterinarians may want to perform diagnostic tests including examination of gram-stained fecal smears.

Campylobacter infections in dogs often are self-limited and require only supportive care, the CDC information states.