A week into October, high winds, low humidity, dry vegetation, and other conditions stoked wildfires north of San Francisco Bay that had been nearly quenched and touched off deadly new fires in the region. 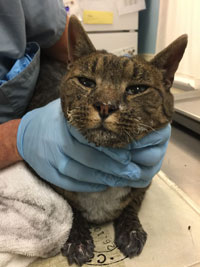 The California Department of Forestry and Fire Protection reported Oct. 22 that it had responded to 250 new wildfires since the Oct. 8 start of the "October Fire Siege" and that the wildfires took 42 human lives, forced 100,000 people to evacuate, burned 245,000 acres (382 square miles), and destroyed some 8,400 structures.

Five thousand of 11,000 firefighters remained on the front lines of 10 active wildfires by Oct. 22, and although Cal Fire projected those fires would be fully contained within a few days, the department was mobilizing yet again, this time in response to high fire danger in Southern California.

Several Western states battled stubborn wildfires this summer into September, but a grim new reality set in when the October fires headed into populated areas of California.

Dr. Grant Miller of the California VMA, who coordinates the California Veterinary Medical Reserve Corps, said, "When a fire hits an urban area, it is a drastically different situation."

The CAVMRC is a unit of the federal Medical Reserve Corps system. CAVMRC veterinarians, veterinary technicians, support staff, and veterinary students are trained in the incident command system and credentialed. They may be deployed when the governor declares a state of emergency. Dr. Miller said the CAVMRC is among the nation's few veterinary reserve corps and is the largest veterinary medical reserve corps, with over a thousand members.

Santa Rosa, the largest city in Northern California's wine country with a population of 175,000, was hit hard by the Tubbs Fire, the most destructive in the state's history. It scorched 36,807 acres and devastated the Coffey Park neighborhood on the northern edge of Santa Rosa.

The wildfires often raced through neighborhoods, giving residents little warning and leaving the fate of many pets and large animals in question.

Dr. Bowen said many local veterinarians and other volunteers went into fire zones to sedate and rescue horses. She did so Oct. 9 for horses she and her family and friends owned. She also went into the east Santa Rosa area of Bennett Valley to rescue yearling foals not used to boarding trailers.

"Loading into a trailer under pressure from the fire line was incredibly hard and emotionally devastating," she wrote in an Oct. 19 email to JAVMA News. She said evacuations continued until the 16th, many horses arriving in the middle of the night or whenever road closures ended or people could get a police escort to check on their animals. 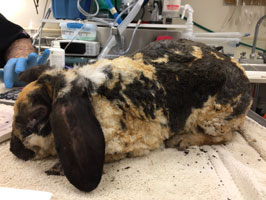 This rabbit was found in the charred Coffey Park neighborhood in Santa Rosa several days after the fire with severe damage to his toes, ears, and eyes. A private practitioner with expertise in rabbits is treating him pro bono.

She said some horses had been running across hills for 10 hours with no water. "At one point, I believe we had over 600 animals. Mainly (we treated) colic, wounds due to evacuations, burns, eye problems, and dehydration. I lost one horse to burns, one to sudden cardiac standstill, two to broken legs, and the last one to what I believe was large intestine torsion. Not to mention the cows, llamas, alpacas, sheep that were lambing, goats, poultry, and bunnies."

Dr. Bowen worked from her truck and slept in a trailer, noting, "We had many security threats at the fairgrounds, which improved after the National Guard arrived, including one incident where a mentally unstable lady poured antifreeze near the evacuated animals. Some of my equipment and medication including a golf cart was stolen. A volunteer had what looked to be a heart attack, and I was personally physically attacked by one of my own volunteers."

One of the CAVMRC deputy coordinators, Dr. Jay Kerr, coordinated the field response and oversaw triage from a human evacuation shelter at the Sonoma County Fairgrounds that allowed pets. Dr. Kerr is a Bay Area veterinarian who recently served on the AVMA Committee on Disaster and Emergency Issues.

He told JAVMA Oct. 12 it was a combined effort by CAVMRC volunteers and a crew from the University of California-Davis to care for the animals; 15 to 20 veterinarians and veterinary technicians were there at the time. They were waiting for more supplies, having gone through their emergency supply.

Besides pets there with their owners, animals were brought in by animal services, firefighters, and sheriff's office personnel. Treatment capabilities were somewhat limited, so the severely injured would be sent for hospital care. Burns were the main injury, especially in cats, which were better able than dogs to escape the flames.

Dr. Kerr said Sonoma County Animal Services had many field officers out and responding. "We're doing all we can to provide services and supplies. People who are willing to come here, we'll give them supplies," he said. "It's a very dynamic situation."

Dr. Kerr knew of one veterinary hospital that burned to the ground and many that were unable to function for days after losing power or being within evacuation zones.

The CAVMRC's mission ended Oct. 20. On average, Dr. Miller said the corps deployed 45 volunteers per day to work at five shelter locations the first week and 30 per day at three shelters the second week.

"Overall, it was heartening to see the veterinary community come together to help," he wrote in an Oct. 19 email. "Hospitals in the area were happy to send supplies, hundreds of medical reserve corps members responded to deployment requests, and deployed volunteers worked very long hours in a high-stress, difficult environment, not to mention the smoke.

"The CVMA worked with industry contacts to procure supplies, and both drug manufacturers as well as wholesale distributors were incredibly supportive and generous."

At the Sonoma Humane Society, Dr. Sarah Reidenbach, director of shelter medicine, said Oct. 19 that early on, the SHS had sent its healthy adult animals to shelters outside the involved area to make intake space. "As far as animals directly impacted by the fire, the burned animals are almost exclusively cats," she said. "Cats and bunnies were found in the burned neighborhoods. Our only dog was a Chihuahua."

The worst injuries in the cats were burned feet, then burned faces and ear tips. It becomes evident after time elapses how severe the burns are, Dr. Reidenbach said.

The SHS is offering free veterinary services, even basic care, to anyone impacted by the fires who needs them. She was impressed to see many human evacuation centers allowing pets and treating them well. People who evacuated with pets need pet food, and suppliers have stepped up. There is also a great need for emergency boarding.

The reunification of found animals with their owners has been high, and microchipping has been the key. One family came in and found the family cat had burned feet but was alive. "There were beautiful tears, hugs, and happiness," Dr. Reidenbach said. 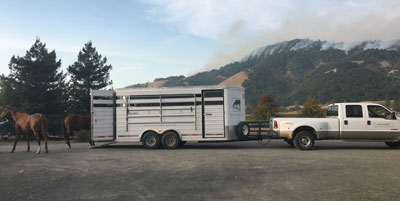 The mandatory evacuation of a Thoroughbred farm on Bennett Valley Road in Santa Rosa Oct. 10 is accompanied by Sonoma Change Program representatives and a police escort. (Photo by Dr. Amber Bowen)

"My favorite story is Rascal, an 18-year-old gray domestic shorthair. The owners lost their house in Coffey Park. They're in an evacuation center, and there was a brief window when they were allowed to go to their home. There in the carport was Rascal. She was alive." They brought her to the SHS free clinic, where she was given every treatment that would benefit her.

Finding a pet lost during the fires isn't a frequent enough happening, though. Dr. Reidenbach said that only 100 of the 600 pets reported lost have been found or reunited with their owners despite intensive efforts.

"Of the animals we have found and that have been brought for help, every one so far has and likely will be saved," she said. "The collaboration and disaster response between local agencies has been fantastic. The county shelter is leading us all, and every local hospital is doing their part to treat some portion of the affected animals, with help from veterinary volunteers far and wide to provide reinforcements for tired staff."