When should a pet be allowed to suffer pain? 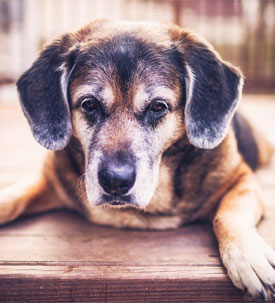 In his line of work as owner of Compassionate Veterinary Hospice in Chicago, Dr. Amir Shanan comes in contact daily with people who hold commonly held ideas about pain in companion animals, such as: We shouldn't let animals suffer or be in pain. Animals hide pain. The most important determinants of animal quality of life are physical pain and appetite.

Those notions are false, he said during a talk July 21 at AVMA Convention 2017 in Indianapolis on animal cognition and ethical end-of-life decision-making. For one thing, an animal's quality of life cannot be measured solely in terms of values such as blood pressure, respiratory rate, or tumor growth.

"Emphasis on pain and suffering overshadows consideration of an animal's capacity for joy. Most suffering is perfectly consistent with life going on," Dr. Shanan said, adding that when considering end-of-life decisions for companion animals, "The real question is: Is the animal suffering so much it's better off dead? How will we know?"

One tool he shared was the "4-box method" for end-of-life clinical decision-making, as described on page 59 of the 2017 book "Hospice and Palliative Care for Companion Animals" he co-authored with Jessica Pierce, PhD, and Dr. Tamara Shearer. The partitions are for clinical considerations, QOL, individual patient preferences, and contextual considerations. Recognizing patient preferences gives the animal a voice. How strong is the patient's will to live, for example?

"We need to listen to what an animal is telling us," Dr. Shanan said. Recent research suggests individual animals have preferences they communicate, and they have different abilities to cope. Much of the brain function research has been done in live animals, which have brain anatomic regions similar to humans'. Animals have internal emotional lives, short- and long-term memories, and some ability to plan for the future, he added.

He referred to Dr. Franklin McMillan's research that animal QOL can be influenced only by things that matter to the animal, and cited researcher F. Wemelsfelder, PhD, who wrote that assessment of QOL in animals requires knowledge of species-specific behavior, experience observing and interacting with animals in different contexts, and willingness to communicate with them as sentient beings.

In human health care, the four commonly accepted principles of ethics are patient autonomy, beneficence, nonmaleficence, and justice. Autonomy can come into conflict with beneficence when patients disagree with what doctors believe to be in the patients' best interest. The classical emphasis had been on beneficence—interpreted as "the doctor knows best"—until the late '70s, with the pendulum moving toward patient-centered care.

Can patient-centered care be applied to animals? Decisions are always made by humans, presumably with the intention of doing what is best for the animal. Sometimes the client and veterinarian see a pet's best interests differently because of differences in their respective assessments, expectations of how the treatment options would change the animal's QOL, or value placed on an animal's life.

In those situations, veterinarians should engage in collaborative decision-making with clients to determine the best course of action, Dr. Shanan said. "Our duty is to support the client's choice, except in extreme situations, such as convenience euthanasia or a prolonged, severe intractable (disease)."