In calls to a national poison control hotline, rodenticides were the most common known causes of poisonings among pets in 25 states during 2016.

Bromethalin was the most common source of those poisonings in 17 states, and anticoagulants were the most common in eight, according to the American Society for the Prevention of Cruelty to Animals. The organization recently identified the top substance related to calls from each state or district to the ASPCA Animal Poison Control Center, as seen in the accompanying map.

Ibuprofen was the top cause in another 10 states, and chocolate was top in eight states and the District of Columbia. The following were the leading causes of poisonings in one state each: oral flea medication in Alabama, fertilizer in Alaska, ivermectin in Maine, topical flea medication in Montana, vitamin A supplements in Nebraska, and permethrin among cats in South Dakota.

In March, the ASPCA also published a listing of the overall most common categories of products related to the 180,000 calls to the center during 2016. Human-use prescription drugs together accounted for 17 percent of calls, the most of any category, although just more than the total for over-the-counter drugs.

Those substances were followed by human foods other than chocolate, animal-use products such as prescriptions or over-the-counter supplements, household items such as paint or glue, chocolate, insecticides, rodenticides, plants, and garden products. 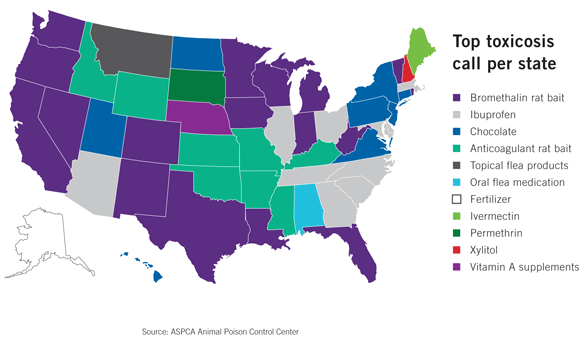