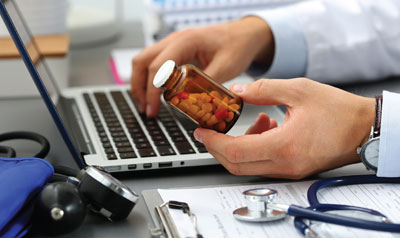 Dr. Jennifer Buur, an assistant professor at the Western University of Health Sciences College of Veterinary Medicine and a veterinary clinical pharmacologist, suggested that veterinarians tailor their prescriptions for pharmacists and that pharmacists treat animal patients with the same care they give to pregnant human patients. In a session this July at AVMA Convention 2017, she and Maureen Schanck, PharmD, professional affairs manager for the National Association of Boards of Pharmacy, described the rules governing pharmacies and methods veterinarians can use to improve understanding between the professions.

Dr. Buur, who also is a former small animal practitioner, said her biggest fear had been that a pharmacist would dispense a drug different than the one prescribed, which did happen and led to the death of a dog that was her patient. Dr. Schanck noted that pharmacists are prohibited from changing prescription drugs without checking with prescribers unless that switch is from a brand-name drug to a generic equivalent, and many pharmacists will consult with the prescribers in such cases, anyway.

Any other change, Dr. Schanck said, is an error.

Dr. Buur stressed that pharmacists are well-meaning, and changes often are intended to save clients money. She also said she has had conversations with pharmacists who, when told cats cannot tolerate ibuprofen, were visibly upset about the prospect that they could have harmed an animal.

Dr. Buur encouraged veterinarians to learn how to write prescriptions that use terms common in human dispensing, abandoning terms such as "SID" and "QD" and replacing them with instructions that are written out as, for example, "give tablet by mouth every 24 hours" or abbreviated as "q24h."

Dr. Buur also noted that although many pharmacies have stopped asking for Drug Enforcement Agency registration numbers for prescriptions for drugs other than controlled substances, some still request National Provider Identifier numbers. These are issued in human health care by the Centers for Medicare and Medicaid Services—a source of frustration for at least several veterinarians in the audience who said pharmacists told them that company software would not let them fill a prescription without an NPI.

Dr. Schanck suggested that veterinarians' prescriptions include statements making it clear that such information is not missing but, rather, is not required for nonhuman patients. Her association also is working with pharmacy companies and disseminating information in efforts to avoid such problems.

Dr. Buur also suggested adding statements to prescriptions as to whether substitutions are permitted and training clinic staff to handle calls from pharmacists who have questions.

Dr. Schanck suggested calling pharmacists when errors occur and giving them another chance if they admit to a mistake. Veterinarians also can contact the parent corporation or state pharmacy board.

In addition to ensuring that pharmacists have veterinary drug references, Dr. Buur suggested giving pharmacies information on common adverse effects, tips for administering oral medications, and lists of after-hours animal hospitals, all of which can help clients.