Gina Luke, an assistant director of the AVMA Governmental Relations Division in Washington, D.C., warns of potential cuts to federal student aid programs and further increases in the cost of student borrowing that could take effect as soon as award year 2018-19.

Luke was speaking during a panel discussion on the Fix the Debt Initiative held July 22 during AVMA Convention 2017 in Indianapolis.

Two committees within the Republican-controlled House of Representatives have been working on the budget and spending plans, including the education budget.

In late July, the budget committee discussed a proposed budget resolution that would provide a framework to guide spending decisions across the federal government, including those for federal student aid. Although the budget resolution doesn't spell out program-by-program cuts, she said the likeliest scenario is cutting student loan programs to reduce costs of the entire federal budget and help balance the budget at the end of 10 years. 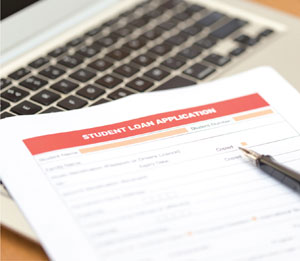 Passing a budget resolution through the House would give the Senate a vehicle to move forward with budget reconciliation and provide the opportunity to pass a bill without having to achieve the 60-vote threshold typically needed to pass a bill in that chamber.

The House appropriations committee also worked on its Labor, Health and Human Services spending bill that would cut $2.4 billion from the Department of Education and $3.3 billion from the Pell Grant reserve fund, the largest need-based aid program for undergraduate students. By contrast, the budget proposed by President Donald Trump calls for more than $9 billion in cuts.

Luke noted that legislators are looking for money for tax reform, among other things, which is why they are eyeing funds from the student loan program.

"On their radar is removing the subsidy on undergrad loans and increasing their origination fees, from 1 percent to 4 percent," she said.

"So that minimal amount of debt that students come into veterinary school with is sure to balloon, and we'll have to deal with that when they're entering the professional program."

Congress is also considering doing away with public service loan programs or capping the amount of debt that can be forgiven at about $60,000 as well as simplifying income-driven and income-based repayment programs to shift greater costs onto borrowers, she said.

"We definitely need your advocacy and engagement around student loan rates and refinancing. The reauthorization of the Higher Education Act was supposed to be done in 2013, but it keeps getting pushed off. It may be next year, because it won't pass this session. That said, they're looking at other things to tweak and are looking at the budget and reconciliation process to do it. We do need your active engagement," Luke said.

Ralph Johnson, CEO of the VMAE, said, "The VMAE has been engaged increasingly with the effort, and we've been trying to be supportive where we can. It seemed like the logical next step to formalize our commitment and help the initiative where the VMAE—in particular, state VMAs—can leverage resources."

He gave the example of how more than 30 state VMAs have put in place Power of 10 programs, which are designed to help classes of recent graduates each year develop foundational skills in leadership, communication, business, and financial literacy.

As another example, he referenced the VMAE's collaboration with Partners for Healthy Pets on a campaign primarily through state VMAs that focuses on forward booking, which means scheduling each patient's next appointment before the patient leaves the practice premises.

Johnson also pointed out how the Colorado VMA, of which he is executive director, succeeded in partnering with Colorado State University to get the state legislature to create a state veterinary loan repayment program that will provide $70,000 in debt relief for two veterinarians a year.

On their radar is removing the subsidy on undergrad loans and increasing their origination fees, from 1 percent to 4 percent. So that minimal amount of debt that students come into veterinary school with is sure to balloon, and we'll have to deal with that when they're entering the professional program."

So far, about 20 states now have their own veterinary loan repayment programs, but unlike Colorado, many do not have funding appropriated for them. A list of state programs is available.

"We may not be able to get state legislatures to put 10 percent more money into higher education, but putting attention on the issue by going for a loan repayment program in other states would be interesting," Johnson said. Or getting them to add some level of funding.

He says another way the VMAE—and by extension, state VMAs—can help the Fix the Debt initiative is by extending the reach of communications and acting as a pathway to engage volunteers in work groups.

"This is a heavily volunteer-driven effort. We need perspective and expertise, which lots of volunteers have. If we can align volunteer interest and pool that with an orchestrated effort, then great," Johnson said.

On July 22, 50 volunteers met during the AVMA Convention to discuss progress and plans for the next steps of the Fix the Debt initiative.

"We are grateful for the many organizations who are working in the areas of increased scholarship funding, raising awareness of nonclinical careers, increased financial literacy, and supporting practice ownership," said Dr. Caroline Cantner, AVMA assistant director for student initiatives in the Western region.

The next volunteer meeting will be at AVMA Convention 2018.

More information about the Fix the Debt initiative is available.