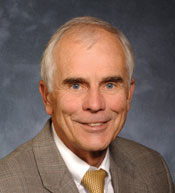 "Dr. Breitschwerdt's leading-edge research in the field of infectious disease has advanced our knowledge of deadly pathogens that cross species barriers, contributing to both canine and human health," said Dr. Mary Smith, CHF board member and chair of the CHF Scientific Review Committee, in the announcement.

"As a clinician, research scientist and educator, he has impacted not only our current understanding, but has prepared many young scientists to continue this work into the future."

Dr. Breitschwerdt is an adjunct professor of medicine at Duke University Medical Center and a diplomate of the American College of Veterinary Internal Medicine. He has contributed to research on bartonellosis in animals and humans and is an expert on vector-borne diseases. He isolated and identified a novel Bartonella species from a dog with worsening endocarditis. CHF has awarded Dr. Breitschwerdt five grants for research on bartonellosis and lymphoma.