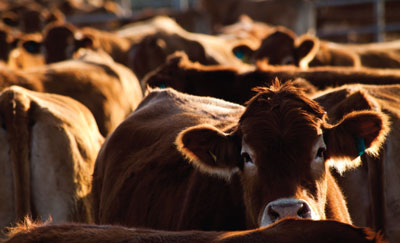 A topical NSAID is the first drug approved for use in cattle to control pain associated with foot rot, the first pain control approval in a food animal.

The drug also was approved to treat fever associated with bovine respiratory disease.

The Food and Drug Administration announced the approval July 25 of Banamine Transdermal, a prescription flunixin solution to be applied along the backs of cattle. It is approved for use in steers, beef heifers, beef cows, beef bulls, and replacement dairy heifers younger than 20 months of age. An injectable Banamine product, flunixin meglumine, already was approved for controlling fever associated with BRD.

Dr. Hans Coetzee, who represents the American Association of Bovine Practitioners on the AVMA Animal Welfare Committee and is head of the Department of Anatomy and Physiology at the Kansas State University College of Veterinary Medicine, said the approval is "a game changer" for managing pain in livestock.

Some compounds—including flunixin meglumine—have been recognized as pain relievers, he said. But none had label approval for analgesia in food-producing animals. With extralabel drug administration, veterinarians assume responsibility for adverse events and illegal residues in meat or milk, he said.

"Though we had some guidance on the drugs that we had available for analgesia, in terms of a residue or withdrawal period, we didn't specifically have that information down to the zero tolerance, and so that created some challenges for practitioners in terms of making these recommendations" for animal withholding periods, he said.

Dr. Renee Dewell, who has researched pain management in cattle and is a veterinary specialist in the Center for Food Security and Public Health at the Iowa State University College of Veterinary Medicine, thinks the flunixin solution's approval to relieve pain in certain cattle with a specific condition may lead to additional drug approvals for pain relief indications. She said the transdermal application also could provide animal welfare and beef quality benefits since subcutaneous and intramuscular administration of flunixin meglumine are associated with tissue damage at injection sites and clostridial myositis.

"Hopefully, lesions associated with these types of injections will decrease now that a transdermal formulation is available," she said.

Veterinarians have had few options for controlling pain in cattle, Dr. Dewell said. Meloxicam, another NSAID, has been used to alleviate pain associated with foot rot, with anecdotal reports of success, but that use requires extra­label administration. Certain drugs regulated as controlled substances likely are effective in reducing pain from foot rot, but they should not be left at clients' facilities and should be administered only under a veterinarian's supervision, she said.

"For several years, my research group and others have worked on validating pain assessment endpoints that could potentially be used as part of a drug approval, and one of those endpoints, I believe, has been used successfully by Merck to get this drug approved," he said.

Dr. Coetzee said he was involved in one set of studies that used a pressure-sensitive mat to assess changes in pressure applied, stride length, and contact area for each foot in response to administration of an analgesic drug. He also worked on a more recent study that suggested topical flunixin applied at the time of dehorning could provide some pain relief, although cortisol concentrations were similar in controls, which he attributed to the absence of local anesthetic during that study.

Dr. Coetzee said veterinarians have an obligation and oath to improve the welfare of animals under their care, and lack of approvals for pain relief indications has presented a challenge because advocating extralabel drug use required that veterinarians bear added responsibility.

"I think this really opens up an opportunity for us as veterinarians to have a conversation with producers about pain relief—routine use of pain relief drugs at the time of some of the management procedures that we commonly perform like dehorning and castration—and really engage them in a dialogue about incorporating some of this new analgesic technology at the time of these procedures in order to improve the welfare of animals under their care," Dr. Coetzee said.