Treading water? A look at the DVM applicant pool

The number of individuals applying to veterinary colleges for the 2016-17 academic year was the highest since 1981, reports the recently released 2017 AVMA & AAVMC Report on the Market for Veterinary Education, prompting the report's authors to speculate that at least since 2015, the number of applicants was no longer in a decline, as it had been in previous years, although the future direction isn't clear. 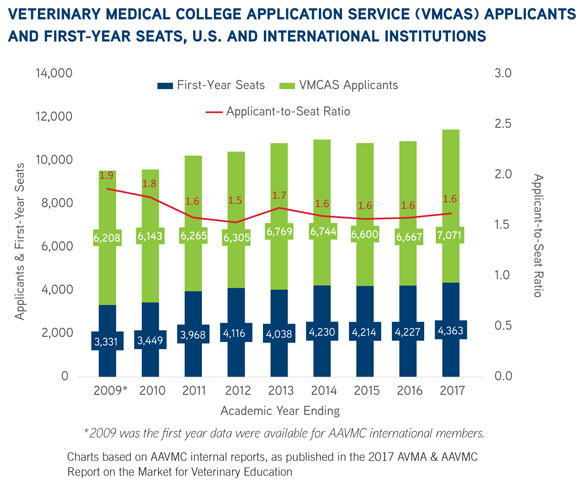 "For almost four decades, the number of U.S. applicants to veterinary colleges has been cyclical, experiencing peaks and troughs about every decade," explains Bridgette Bain, PhD, assistant director of analytics in the AVMA Veterinary Economics Division.

"The first cycle lasted 19 years, and 2018 will mark the end of the second 19-year succession. To the extent that recent history represents the future, we are likely to see a decline in the applicant pool by 2019. However, the uncertainty of the economic environment coupled with a robust market demonstrated by the simultaneous growth in starting salaries and number of new veterinarians finding full-time employment makes it hard to predict the trend that the applicant pool will follow."

The report notes that over the past four years, the ratio between applicants and available college seats has been relatively stable at 1.6 (see graph). The 7,071 applicants in 2017 vied for 4,363 seats, lifting the ratio to 1.62. A sharp decrease in the ratio between 2008 and 2009 is attributed to adding AVMA Council on Education–accredited foreign schools to the system, rather than a change in the number of seats at U.S. institutions. The consequences of an increase in seats, such as the proposed Texas Tech institution, depend on how much the addition brings down the cost to each student of acquiring a veterinary degree, Dr. Bain explains. "The ratio could increase if the assumption holds that an expansion in the number of seats would drive down the cost per student, and thereby attract more applicants in an environment characterized by concern over escalating tuition."

"But, if the rate of increase in the number of seats at existing schools continues with the long-term trend," adds Dr. Bain, "we could see a ratio of 1.04:1, should two new schools come online by 2025." Regardless, she notes, any new school's ability to provide students with an education at a lower cost will determine the degree program's sustainability.

HISTORICAL ANALYSIS OF THE APPLICANT POOL

Despite the slow decline seen nationally in the applicant-to-seat ratio reported over the 1980-2016 period, applicant test scores and preveterinary grades have remained in the consistently high range, according to the report (see table)."Evidently, the profession continues to attract the brightest students," Dr. Bain concludes. "We can therefore deduce that although the applicant pool is diminishing in number, it isn't doing so in quality. If the cost of education, however, continues to rise at its current rapid rate, the veterinary profession risks experiencing a reduction in test scores of the applicant pool as more-qualified students opt for more financially rewarding careers."

She contends that, as students gain greater exposure to the hardships of living under the debt incurred as a result of "the skyrocketing costs of education, they are likely to reconsider applying to grad schools as they see firsthand what life after veterinary college looks like. If this happened, it would likely put a strain on the applicant pool."

Barbara Dutton is the economics writer/content coordinator for the AVMA Veterinary Economics Division.