On the trail of horses 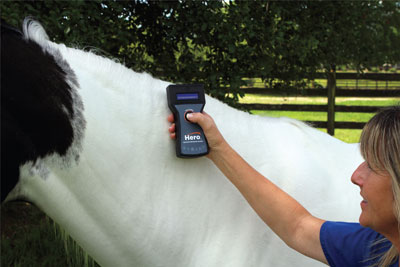 A Bluetooth scanner picks up the number on the microchip implanted in a horse. The recently launched Equine Microchip Lookup Tool allows users to enter that number, and when the chip is located in a participating database, the tool displays the name, phone number, and website of the database in which the chip was found. The tool will also show whether the owner has registered the chip. (Photos courtesy of Microchip ID Systems)

At the Texas-Mexico border not long ago, border agents intercepted a load of 10 horses being smuggled into the U.S. All the horses tested positive for equine piroplasmosis and were in poor condition. The breed of horses was unknown, but authorities had one bit of good news: Each horse was microchipped. It took animal health authorities four days to track down information on their pedigrees and history, which ultimately led to the identification of a large smuggling ring that illegally imported Pura Raza Espanola horses. The authorities learned that these horses are brought by boat from Spain to Mexico, are transferred through Texas, and end up in California. As a result, more horses were found in California that also tested positive for equine piroplasmosis.

Dr. Angela Pelzel-McCluskey, an equine epidemiologist with Veterinary Services in the Department of Agriculture's Animal and Plant Health Inspection Service, relayed this story at a conference on equine traceability earlier this year. She said a lot of species don't go back and forth in their movements the way horses do. And yet, no standard system exists to track and identify them.

"We have been told that because we do not have a U.S. requirement or a system set up in the U.S. (for microchipping), thus we cannot require that from other countries. If we set up a system in the U.S., then they can't use that as an excuse, especially at Southern U.S. borders. Adding a microchip requirement on the U.S. side is really going to help. Currently, the only requirement for microchips are for horses going to slaughter in Mexico. That's backwards," she said.

"Advances in equine microchip technology make microchips the ideal industry choice for a unique permanent individual identification of horses. The biothermal microchip has a tremendous benefit as a temperature surveillance tool for the industry. The use of biothermal chips allows for enhanced health monitoring at equine events, racetracks, boarding facilities, or breeding operations. The ability to rapidly scan multiple horses during a disease outbreak would be extremely beneficial as it could assist in early and prompt isolation of horses demonstrating a fever," said Dr. Katie Flynn, equine staff veterinarian for the California Department of Food and Agriculture.

She helped organize the Equine Identification Forum, "Advancing Identification, Technology, and Electronic Health Records," held Jan. 17-18 in Denver, which brought together more than 100 equine industry professionals. It was the second such meeting hosted by the National Institute of Animal Agriculture and the U.S. Animal Health Association.

The forum's goal was to obtain industry thoughts on the need for a national equine identification program, the ideal method of equine identification, the concept of a centralized database versus various industry databases, and use of a search tool for equine microchips as well as to get recommendations for advancing equine traceability and electronic health records.

Dr. Flynn said the major accomplishment of the forum was agreement by all equine stakeholders that current measures in the U.S. are inadequate and that industry-driven advancement of equine identification and traceability is needed in the U.S. to ensure the health and prosperity of the equine industry.

A variety of identification methods

A common system for equine identification and traceability has been a long-debated topic within the horse industry. Dr. Jim Morehead, founding partner of Equine Medical Associates in Lexington, Kentucky, was involved with the issue more than a decade ago when he sat on the American Horse Council's Equine Species Working Group in early 2005. It was formed in response to the USDA's proposed National Animal Identification System.

Dr. Morehead said at the Denver forum that after the working group formed, "It quickly became apparent that many in the industry did not see the world through the same eyes as veterinarians," and some segments of the industry faced several roadblocks. Owners, in particular, expressed concern about the government monitoring them and their horses and having access to their private information, such as equine medical records, ownership, and travel. Migration of the microchip, too, has been mentioned as a deterrent, but according to the 2012 study "Health Factors Associated with Microchip Insertion in Horses," radiographs of implanted microchips followed by measurement of distance from the most cranial point of the fourth cervical vertebra indicated that microchips did not migrate (J Eq Vet Sci 2012;32:177–182).

In summary, it is believed the time for advancing equine identification and traceability is now as the industry is heading in that direction. Industry is in a position to take charge and lead as it is the overwhelming consensus that the government should not lead the charge. The identification technology and the software to manage the data of microchips is available and ready for use by the industry. It is time for microchips to be implanted in horses as a means of identification."

Ultimately, the USDA scrapped the NAIS, and instead, instituted its Animal Disease Traceability Program in 2013 to trace livestock, including horses, in the event of a disease outbreak. Under these regulations, horses moving interstate must be identified and accompanied by an interstate certificate of veterinary inspection. Official identification methods require at least one of the following:

In general, several methods can used to identify horses, and each sector of the equine industry uses methods that best suit its purpose. For example, most racing jurisdictions require a unique tattoo on a horse's upper lip. Some horses might have no form of identification or multiple forms of identification. And a form of identification doesn't have to be unique to each horse. For example, ranch brands are not unique because all horses have the same brand. Presenters at the forum noted that not all methods are entirely reliable. Lip tattoos can fade or become disfigured, and brands can be hard to trace. Dr. Flynn pointed out that physical descriptions can be subjective and differ, depending on who is describing the horse. She also noted that many horses look alike, in which case, their written physical descriptions would not be sufficient for telling the individuals apart.

On the right track

Despite the low number of microchipped horses, more in the industry are starting to realize their benefits.

For one, a large number of equine disease outbreaks in recent years have highlighted the challenges associated with identifying and tracing infected and exposed horses under the current system. "The ability to rapidly scan multiple horses during a disease outbreak could ensure stress-free temperature monitoring at intervals for easy detection of elevations in temperatures and prompt isolation of horses demonstrating fever," according to the forum's white paper.

Another advantage over other traditional identification methods is that microchips would allow veterinarians to electronically capture health documents. Most major events involving horses in the U.S. require some sort of health certification, including a negative Coggins test for serum antibodies against the equine infectious anemia virus.

The American Association of Equine Practitioners does not currently have a position statement on the use of microchips in horses. The association acknowledges that there are many methods of identifying a horse; however, if the industry moves forward with microchip identification, the AAEP will support the industry, Dr. Morehead said.

Already, some horse-competition organizations are requiring the use of microchips for ease of identifying individual horses.

The Jockey Club began requiring microchips for foal registrations starting this year. In fact, 66 percent of the 23,000 foals born in 2016 were voluntarily microchipped by owners. Microchips are already a compulsory component of Thoroughbred registration in several countries, including Great Britain, France, Ireland, Australia, South Africa, Germany, Italy, and New Zealand.

The United States Equestrian Federation also passed a rule requiring that horses registered with the United States Hunter Jumper Association be microchipped for identification purposes. As of Dec. 1, 2017, all hunters, jumpers, and equitation horses must have microchips to accumulate points earned through competition. Not to mention, the International Federation for Equestrian Sports (FEI), which hosts the World Equestrian Games, has required all horses registering with the organization after Jan. 1, 2013, to be microchipped.

Because the chip number is attached to the breed or competition registration, this segmentation of the equine industry has led to challenges of multiple data silos of equine microchip numbers, a lack of data sharing, and no centralized microchip database or microchip search mechanism, according to the forum white paper.

"Ultimately, the goal is to get microchips in horses. However, the industry should ensure that microchips meet the minimum standards of ISO 11784/11785 and be ICAR-certified (International Committee for Animal Recording). The international integration of equine identification technologies is critical to the industry due to the ever-increasing global market," according to the forum white paper. 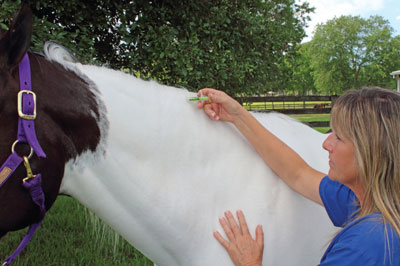 Depending on state laws, microchips should be implanted by or under the supervision of a veterinarian. Guidelines recommend the microchip be implanted in the nuchal ligament, on the left side of neck, halfway between the poll and withers, approximately 1.5 to 2 inches below the mane line. Here, Dr. Allison Barca, of Folsom, Louisiana, implants an Equine Mini Chip, one of the microchips available for horses.

To address this issue, the Equine Microchip Lookup Tool was launched after the conference. The goal of this site is to help veterinarians, horse owners, natural disaster responders, national and state regulatory entities, and others seeking information about a microchipped horse. When the chip is located in a participating database, the tool displays the name, phone number, and website of the database in which the chip was found. The tool will also let users know whether an owner has registered the chip. If the chip is not found in a connected database, the look-up tool will provide the name and phone number of the manufacturer of the microchip.

Further dialogue and cooperative efforts are required to realize a national equine identification program. A new industry working group formed at the forum will provide leadership in this area by developing a strategic plan. Some areas of potential exploration for advancing equine identification and traceability are as follows:

"In summary, it is believed the time for advancing equine identification and traceability is now as the industry is heading in that direction. Industry is in a position to take charge and lead as it is the overwhelming consensus that the government should not lead the charge. The identification technology and the software to manage the data of microchips is available and ready for use by the industry. It is time for microchips to be implanted in horses as a means of identification," according to the forum white paper.