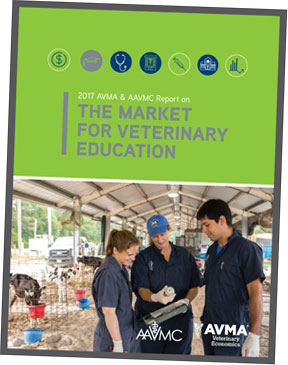 Starting salaries for new veterinary college graduates continue to increase overall, but so does educational debt. In fact, for every sector of the profession, the growth rate for educational debt has continued to outpace the growth rate for starting salaries, according to the 2017 AVMA & Association of American Veterinary Medical Colleges Report on the Market for Veterinary Education. Still, for 2016, the debt-to-income ratio was 2:1, which was essentially unchanged from the 2015 ratio of 1.99:1.

At last year's Fix the Debt summit, which brought together 180 attendees representing various facets of the profession, the goal was to agree on strategies to lower the DIR to 1.41:1 by 2025 (see JAVMA, June 15, 2016).

"This ratio helps establish a picture of the connection between the demand and supply of new veterinarians through understanding the cost to obtain a DVM degree, and the subsequent income that is the payback to the veterinarian for acquiring it," according to the report.

The report, released in mid-June, derives much of its information from the AVMA Senior Survey conducted each spring among the graduating students of U.S. veterinary colleges accredited by the AVMA Council on Education. The document takes an in-depth look at new-veterinarian incomes, educational debt load, the veterinary student applicant pool, and veterinary colleges' supply of seats as well as the debt-to-income ratio and strategies to improve the ratio.

Some key findings in the report are as follows: