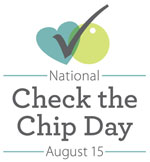 Lost or stolen pets have a much greater chance of being reunited with their families if they have been microchipped and the registration information is up-to-date.

So, the AVMA and the American Animal Hospital Association team up each year to sponsor national Check the Chip Day on Aug. 15, to remind pet owners about having their pets microchipped and keeping current their registration.

To help veterinarians promote the upcoming event, the AVMA and AAHA developed resources with support from microchip manufacturer HomeAgain. 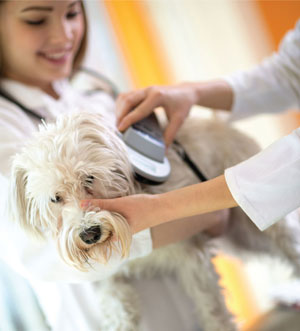 One resource is a flier that a veterinarian can print and fill in to provide a record of a pet's microchip information for the client. The flier also lists the websites of microchip manufacturers that participate in the AAHA Universal Pet Microchip Lookup Tool. The tool helps pet owners who do not know where a pet's microchip is registered.

The flier also links to a toolkit that AVMA members can access for Check the Chip Day. The toolkit offers resources on stress-free ways to observe the event, posts and images for social media, a sample proclamation for a mayor or governor, and a sample press release.

Alley Cat Allies recently launched its Plan to Scan campaign to raise awareness that too many companion cats and feral—or community—cats are still not being scanned for microchips, resulting in many of them being killed without any benefit from the lifesaving information available from microchips.

"More cats are being microchipped, but the information from the microchips can only help return them to their homes if they're scanned before shelters impound cats," said Becky Robinson, Alley Cat Allies president and founder.

The campaign recommends that veterinarians encourage clients to get animals microchipped, that cat owners and caregivers register the microchip and keep information current, and that animal control officers, shelter employees, and volunteers scan cats for microchips when they enter shelters or clinics or are found outdoors.

Alley Cat Allies notes that microchips also help reunite community cats with their caregivers and outdoor families. The organization offers a resource on how to scan a community cat for a microchip.

Lost Dogs of America provides free resources to owners of lost dogs and educates dog owners on preventing the loss of their dog.