California might ban the retail sale of dogs, cats, rabbits 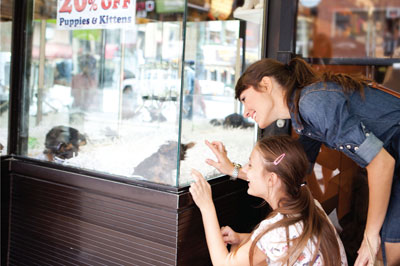 On May 30, the California Assembly passed AB 485, Pet Store Operators: Dogs, Cats, and Rabbits. At press time, the bill was before the California Senate's Business, Professions and Economic Development Committee.

According to the legislative counsel's digest of AB 485, "This bill would prohibit a pet store operator from selling a live dog, cat, or rabbit in a pet store unless the dog, cat, or rabbit was obtained from a public animal control agency or shelter, society for the prevention of cruelty to animals shelter, humane society shelter, or nonprofit rescue or adoption organization that is in a cooperative agreement with at least one private or public shelter, as specified."

Dr. Ken Pawlowski, president of the California VMA, said the CVMA took a position of "watch" on the bill because the legislation would not have a direct impact on veterinarians in the state. He said, "There are already multiple municipalities that have similar bills in place, and so the biggest thing that this does is add rabbits."

Among the California cities that ban the retail sale of dogs and cats are Los Angeles, San Francisco, and San Diego. Dr. Pawlowski considers the statewide legislation to be a statement against puppy mills. In his practice, what he does see occasionally are clients who buy dogs through the internet that could have come from puppy mills.

Assembly member Patrick O'Donnell said in a statement, "With the passage of AB 485, we are one step closer to ensuring that dogs, cats and rabbits in shelters are able to find forever homes. The bill will put an end to inhumane puppy and kitten mills responsible for unhealthy animals and animal overpopulation."

The Pet Industry Joint Advisory Council had supported amending AB 485 with sourcing restrictions. Mike Bober, PIJAC president, said in a statement, "Restricting sources of companion animals to only the most reputable and ethical breeders would ensure the availability of healthy pets as well as allow Californians the full diversity of choices to find the pet that best fits their needs."

Best Friends Animal Society lists local bans on retail pet sales in 18 states. To date, no state has banned the retail sale of dogs and cats, according to the AVMA Division of State Advocacy and Leadership.