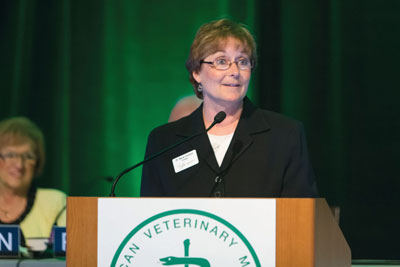 For the past three years, Dr. René Carlson has been president of the World Veterinary Association, the internationally recognized voice of global veterinary medicine. A federation of roughly 90 veterinary organizations representing 500,000 veterinarians on six continents, the WVA focuses on all species and aspects of the veterinary profession.

Yet, despite its credentials, the WVA is arguably one of the least understood veterinary organizations among U.S. veterinarians. Dr. Carlson understands; for 34 years, most of her time and attention were spent in private clinical practice, with the last 15 years devoted to running her own small animal practice in Chetek, Wisconsin.

"Veterinarians are busy with so many other things that it's a real challenge to look beyond their own communities," she said.

Dr. Carlson admittedly knew little about the WVA prior to 2011 when, as AVMA president, she represented the AVMA at the general assembly of the World Veterinary Congress in Cape Town, South Africa. She came away from the meeting excited about the AVMA's potential to influence global veterinary medicine through the WVA. So excited, in fact, that in 2014, Dr. Carlson successfully ran a global campaign as a candidate for the WVA presidency.

"It's amazing," she remarked. "I'm this person from a town of 2,000 people in Wisconsin, and I'm president of an international organization representing fellow veterinarians around the world." Dr. Carlson's three-year term ends in late August when the WVC convenes in Incheon, South Korea. She will carry on as the AVMA director of international affairs for another two years, a position she was first appointed to in 2013.

Headquartered in Brussels, the WVA promotes veterinary medicine globally by working with various international entities, including the World Organisation for Animal Health (OIE), the World Health Organization, and the Food and Agriculture Organization of the United Nations. From 2014-17, the four strategic priorities for WVA have been animal welfare improvement, pharmaceutical stewardship, veterinary education, and zoonotic disease prevention. For example, the WVA Animal Welfare Committee and Advisory Group developed fact sheets for veterinarians and associations on such topics as working equids, transportation of food animals, and owned and unowned free-roaming dogs.

In March 2015, Dr. Carlson appeared before a WHO advisory committee to testify against curbing ketamine abuse by scheduling the anesthetic as a controlled substance under the 1971 U.N. Convention on Psychotropic Substances.

"The WVA is fully aware of the potential public health problems caused by illicit use of ketamine and agrees with the need for narcotic and psychotropic drugs to be controlled and strictly regulated. However, these measures must be science-based and proportional, and should not unnecessarily hamper the use by veterinary surgeons that would risk the health and welfare of the animals under their care," Dr. Carlson told the committee.

"Such international scheduling of ketamine," she concluded, "may lead to ketamine shortages to veterinary and medical clinicians, especially in remote areas."

Another way the WVA supports veterinary medicine is by helping member organizations advocate for the veterinary profession in their country or region. "If veterinarians aren't there, making policy and being vocal, then someone else makes those decisions," Dr. Carlson noted. 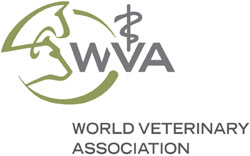 The WVA supports and promotes the harmonization of basic core competencies in all veterinary education programs that offer a veterinary degree. Additionally, the WVA has partnered with the World Continuing Education Alliance to offer free and discounted CE to any veterinarian in the world through the Continuing Education Portal on the WVA website. A customized portal for veterinary associations to offer their members is available for a fee.

This May, the WVA and Health for Animals, an international association representing the global animal medicine industry, together launched a website designed to educate the public on the importance of animal health.

The enthusiasm that swept Dr. Carlson into the WVA presidency has not waned, even though it's one of the most demanding jobs she's ever had. In addition to being the public face of the world association, she chairs the WVA Council of 17 members that meets every six weeks via teleconference and in person once a year during the World Veterinary Congress. The council chair, Dr. Carlson explained, has "enormous influence" because that person sets the agenda and manages the meeting.

One of the greatest obstacles facing the WVA, according to Dr. Carlson, is proving its value to grass-roots members. "Quite honestly, I don't think a lot of AVMA's members know or even understand why the AVMA is a member of the WVA," she said.

"It's a difficult sell, but we need to belong because the WVA needs representatives from strong associations like AVMA to lead," Dr. Carlson continued. "The United States is looked to as a leader. Once there's buy-in from us, that brings credibility and visibility, whatever the issue or organization, and other countries want to follow.