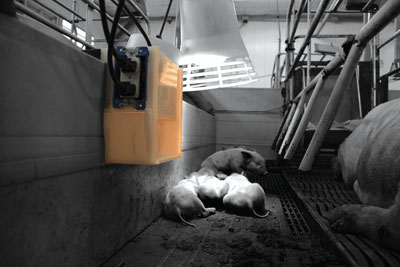 The SwineTech SmartGuard, in yellow, monitors squeals for indications piglets are being crushed and signals electronic devices that are attached to the sow. Through these devices, the monitor can deliver a vibration and, if the sow does not stand, a shock to prompt standing. (Courtesy of Matthew Rooda)

A product in testing would try to save piglets by delivering vibrations and shocks to sows when squeals from piglets indicate they are being crushed.

Matthew Rooda, the 23-year-old CEO of SwineTech, said that, so far, his SmartGuard monitor has prevented 74 percent of potential crushing deaths among piglets. He graduated in December 2016 from the University of Iowa with a bachelor’s degree in enterprise leadership, and he is now developing the company he formed prior to graduation with Abraham Espinoza, a computer science major at the university.

Their product pairs a monitor, which analyzes the wavelength and frequency of squeals from piglets, with electronics attached by adhesive patches to the sow’s chest. When squeals indicate a piglet is being crushed, the electronics on the sow’s chest vibrates; if the sow does not stand, a shock is delivered.

Rooda said the shock is comparable to that of electronic collars used to train dogs.

Rooda, who grew up on a swine farm, said he developed the concept for the product after managing a farrowing house during his time as a community college student, when he saw that most piglets that died had been crushed by their sows.

Dr. Tom Burkgren, executive director of the American Association of Swine Veterinarians, said crushing is among the causes of deaths for preweaning piglets, although farrowing crates used for individual sow housing can reduce those deaths by limiting where sows can lie down, giving piglets opportunities to escape. Good husbandry also reduces the risk, he said, especially with large litters.

Dr. Burkgren said he is interested to see whether the technology developed by SwineTech will be accepted, as the shocks delivered to sows could be a welfare concern. But he also sees potential good if the product can save the lives of piglets.

SwineTech will ship about 300 of the SmartGuards this summer for use in barns, data collection, and testing, mostly in Iowa, Rooda said.

The company also plans to develop software for health tracking that uses the sow-worn components, which can report movement and temperature data, he said.

The monitors have temperature sensors and can be used to control heat lamps and regulate the temperature to a point set by a producer, keeping piglets comfortable away from their sow, Rooda said.